ALL STAR RECOMMENDS FOR MARCH 7TH 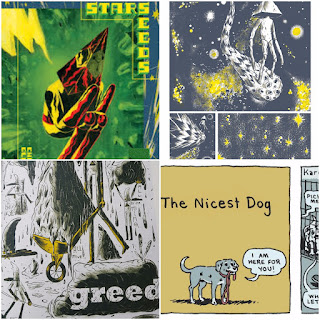 Good news for anyone wondering why there are really not a lot of Andre Franquin comics in English. Cinebook has announced it will be releasing Franquin's classic Gaston comics as of mid-year. If you're unfamiliar with Franquin's work, he was a cartoonist who made the bounciest, liveliest cartoons possibly ever. Coincidentally, The Comics Journal recently published this article, which suggests that the Belgian artist may in fact be the greatest comics creator of all time.
Anyway, Cinebook is publishing the adventures of Gaston Lagaffe under the title of Gomer Goof, which the comics snob in me rankles at somewhat (what's wrong with just Gaston?), but a quick Google check reveals that the title change is consistent with previous sporadic efforts to bring the character into English, so it's a move that does make some sense.
Bring on July! 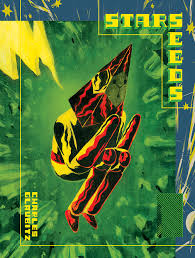 COMIC OF THE WEEK : STARSEEDS
By Charles Glaubitz
Published By Fantagraphics

Kermit the Frog, Jodorowsky, Miyazaki. Just three of the names checked off by Mexican multimedia artist Charles Glaubitz in this week's video (below) as influences on The Crystal Sigil, a comic published about six years ago. From The Crystal Sigil grew what ended up being Starseeds, a 200-plus-page hardcover released just a few weeks back by Fantagraphics. On the surface, its an odd triumvirate of names to invoke, but as I fumble around for ways to succinctly describe what Starseeds actually feels like (and it is one of those rare books almost felt/experienced/absorbed rather than merely "read") the three names area descriptor better than anything I could come up with. Although I'd toss Kirby in there also - there is more Kirby Krackle on the average page of Starseeds than of any other comic since The King himself churned out his Fourth World saga.

I'm also going to have to lazily plunder from the publisher's description for a moment, to succinctly give you an idea of the book's...um..."plot": "The warrior-like Starseed children -- the end result of the evolution of revolution within our system of genetics, philosophy, science, and art -- take on the Illuminati and the coming of the black darkness in this fantastic work of mythical, pictorial, and cosmological majesty." Right. That's about as close to a story description as we are going to get. It sounds like some sort of paranoid transcendentalist art comix take on The X-Men, which I guess Starseeds kind of is now I really digest that, but do not go into Starseeds expecting a Wolverine vs The Brood type of cosmic mutant smackdown. Glaubitz has a far loftier endgame in mind even though he does not skimp on the fisticuffs.

Drenched in the work Joseph Campbell (most definitely add him to the names above), Starseeds is a book keen to trigger something in your subconscious. You will recognise archetypal figures and struggles within - our hero faces down his own poisonous shadow in much the same manner that Luke Skywalker faced down his on Dagobah - but you won't have seen them rendered quite like this before. Glaubitz's pages are filled with an almost childlike glee for creation married with Fine Art sophistication married with a clear love of myth. In fact, if you're desperate for Jesse Moynihan to finish his classic Forming trilogy, this is a more than fitting way to spend your time. Glaubitz's almost-cute characters (even the villain looks like something you'd find on the poster for an Illuminati happy meal) are put through an increasingly complex series of surreal landscapes and battles and transformations. At times, you may well be actually lost and, by book's end, maybe even a touch overwhelmed/overstimulated, kind of like a much, much safer version of a Lovecraft protagonist who stared at The Beyond for too long. This is a good thing. A sign of powerful art.

And powerful art is what Charles Glaubitz gives us, with page after striking page of trippy space expanses, nightmarish interdimensional Illuminati strongholds, gloopy "white poop" beasties, cosmic heroes of the collective unconscious borne from "centre alignment with the self" and inner lizard monsters, all of which is contrasted against the humdrum of the everyday suburban life and all wrapped in up a package that feels like LSD-era '70s Marvel in charge of Adventure Time. 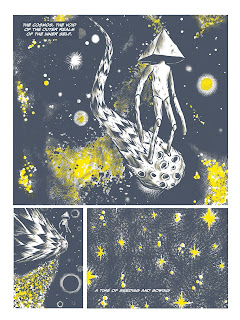 A particular highlight comes in the form of our bad guy's transformative moment as he literally shucks off his Illuminati grunt persona and awakens the real darkness within. What follows is a virtual primer on being a psychedelic super villain, as Glaubitz presents us with full-page splashes visually manifesting each of the seven deadly sins, with matching text on each opposite page reading like something some anti-Yoda might well teach. From "greed": "Take everything away from your enemy. Keep it all for one's self. Destroy him/her by thinking only of you, in your mind you should be thinking only me me ME ME." 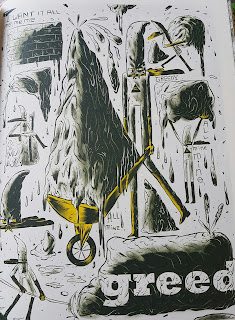 There's really little more I can add outside of saying that for a book so long in the making (various images and pages go back at least six years) Starseeds feels very of the moment. The book's evocation of deep, paranoid conspiracy married with an alien creation mythology feels more relevant than ever in a time where a manipulative lunatic like Alex Jones has the ear of the President. In fact, as this excellent and fun little Publishers Weekly review notes, Starseeds "should be considered the official tome of the post-truth era, because it traverses realities and suggests that all truths are concurrent and that your own truth defines the universe—or something equally mind-bending and impossible to understand."

Starseeds is boundlessly energetic in style and execution and will make your brain crackle in all the ways that only good comics can. Find a quiet space, put on something ambient but odd (I recommend this or if that's a bit much, maybe this) and let Starseeds transport you to both the inky heights of cosmic comics possibility and deep into the interior of the self. These two spaces, Starseeds postulates, make up the cosmos itself. The light from outer space is alive. The light within us is alive. The wonder of Glaubitz's work is that he reminds us not only of these rather obvious facts, but also that our system of symbols is also still very much alive and that comics remains the most immediate and vital artistic medium to explore it. Surely this is the year's most cosmic and mind-bending comic, one in which philosophy and fists both fly with equal reckless abandon. 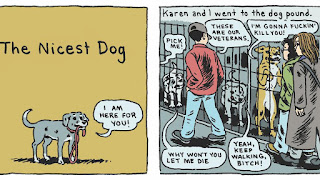 WEBCOMIC OF THE WEEK : THE NICEST DOG
By Gabrielle Bell

Time for an interlude in the intergalactic, pan dimensional, existential action.

It's been almost four years since Yvonne and I adopted our dog Beatrix aka Little Bea aka Bea Bea, and we can't really imagine life without her although obviously one day we will have to. The story of how we actually got her is a funny one but kind of long, so I'll share Gabrielle Bell's new little webcomic for Vice here instead. "The Nicest Dog" details Bell's first visit to a dog shelter to potentially adopt her very first dog. Dog shelters, as I'm sure most of you are aware, are sad and overwhelming places and Bell perfectly captures the anxiety first time dog owners (like me) feel upon entry and seeing all those pooches staring out at you from behind the bars of their cages. It's a sweet and funny little strip and a pretty strong argument for animal adoption, as if we needed another.

Back into the hidden worlds of majestic, unknowable spaaaaaaace!

Here's a peek behind the curtain of the creation of Charles Glaubitz's Starseeds, with digital layouts and roughs along with the actual comics, Secret Societer and The Crystal Sigil, that ended up being stitched together and built upon to become the interstellar comic book consciousness-expanding device that Fantagraphics just released. Glaubitz comes across as remarkably grounded for one whose imagination is a rolling sea of mythology, cosmology and philosophy, but that's what makes this video all the more intriguing.

Posted by All Star Comics Team at 4:45 PM