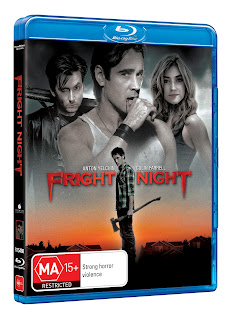 A remake of the 1985 original, teenager Charley Brewster (Yelchin) guesses that his new neighbor Jerry Dandrige (Farrell) is a vampire responsible for a string of recent deaths. When no one he knows believes him, he enlists Peter Vincent (Tennant), a self proclaimed vampire killer and Las Vegas magician, to help him take down Jerry.

All we want from you to go into the draw to win a copy is tell us which person (real or fictional) moving in nextdoor to you would cause you to have a fright night.


All entries will go into the All Star Barrel and winners will be drawn at random on Monday the 13th of Feb at 6pm.
The Blu-rays will be available to pick up from the store Tuesday the 14th of Feb and winners must provide photo ID before collecting.

Again huge thanks to Fright Night, out on DVD and Blu-Ray now.
For more info check Fright Night