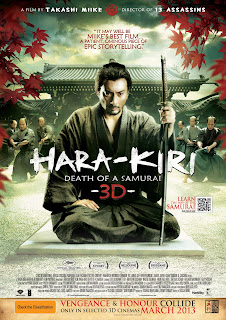 From legendary filmmaker Takashi Miike (13 Assassins), HARA-KIRI: DEATH OF A SAMURAI tells a tale of love, honour and revenge amidst the fall of the Samurai in 17th Century Japan. The first 3D film to ever be shown in competition at Cannes, the story centres on a poverty-stricken Samurai who discovers the fate of his ronin son-in-law, setting in motion a tense showdown of vengeance against the house of a feudal lord.

With a massive thanks to our friends at Icon Films, we are lucky enough to have 10 in-season double passes to give away to the next epic from director Takashi Miike, HARA-KIRI: DEATH OF A SAMURAI in cinemas from March 21.

If you'd like the chance to win, only you need to do to enter the draw is this. Tell us "If you were a samurai in feudal Japan, what would your code of conduct be?"

Terms and Conditions:
All entries will go into the All Star Barrel and winners will be drawn at random.
Entries close 6pm Tuesday 19h of March and winners will be announced Wednesday the 20th of March.
Passes will only be available to pick up from the store and winner must produce photo ID upon pick up.
Passes MUST be picked up within a week of the draw date. Any remain passes after this date will be given away at our discretion to make sure they don't go to waste.

Again thanks to Icon Films and HARA-KIRI: DEATH OF A SAMURAI  in cinemas from March 21.
For more infomation head to:http://www.iconmovies.com.au/
or http://www.facebook.com/IconFilmDistribution.Au

Posted by All Star Comics Team at 9:18 AM