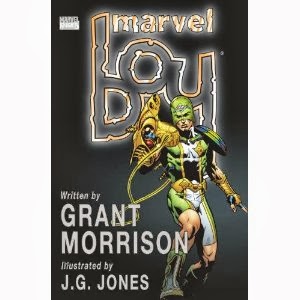 To celebrate Grant Morrison visiting Australia as part the GRAPHIC Festival in Sydney later this week, we thought now might be the time to showcase one of his lesser known reads, MARVEL BOY. Teaming up for the first time with the co-creator of DC's Final Crisis, J G Jones, Morrison has introduced one of the more interesting new characters to the Marvel Universe in recent time. 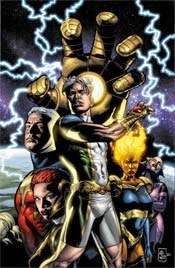 Meet Marvel Boy - a.k.a. Noh-Varr of the Kree Empire, last survivor of a doomed starship. He's seen good friends killed by sheer ignorance and hate, and his welcome to Earth consisted of imprisonment and torture. Now he's angry - and if necessary, he'll take on our entire planet in the name of love, justice, and the freedom to ride in his spaceship. 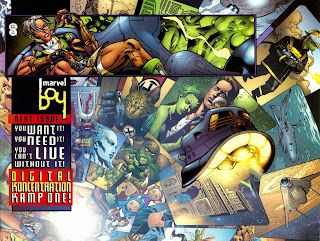 Morrison runs wild with this stand alone book introducing us to Noh-Varr, a beautiful, young and powerful "superhero" that follows more from the teachings of Johnny Rotten than he does Captain America. Digusted by almost ever aspect of human life on earth, Marvel Boy is keen to make things better at any cost. Virus corporations, insane bondgage super villians just a couple of the Morrison concepts and ideas you can look forward too wrapping your brain around.

Jones' art of course is glossy and stunning as always. His flare for over the top and epic action plays out brilliantly across double spread pages with stunning colouring effects that make the pages almost feel like they are lighting up.

Independant of almost every thing else in the Marvel Universe, this tale appeals to both new, old or non Marvel fans alike! 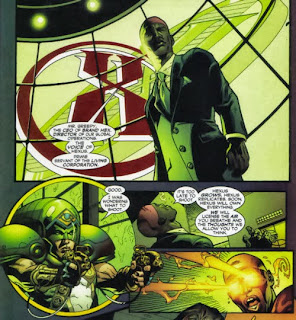 Of course there is any number of other Morrison reads we can recommend after you read and enjoy this book but what you might want to do is follow up on further Noh-Varr adventures in the current Marvel Now series of Young Avengers by Kieron Gillen.

If you have any questions, you know where to ask them. You can start to buy the Legend from this Thursday the 3rd of October.

All Star Legends. The legendary titles of the highest recommendation.
Posted by All Star Comics Team at 8:28 AM