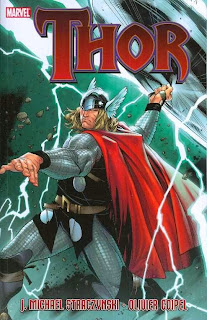 The release of THOR: The Dark World sees the Norse one striking back in theaters for a second solo jaunt. With this release it seems an appropriate and opportune time to take a Marvel Legend and have him canonized as an All Star Legend!

2007 in the Marvel Universe was an interesting time. The Avengers Disassembled had the Thunder God seemingly put to rest, while Cap and Iron Man began to question the ability of a unified team to find the same spirit and support in light of the increasingly individual dangers and threats in the world around them.

With Civil War came an additional breaking point for the Marvel Big three. A clone Thor (or Clor!) proving to be a tipping point in a battle that saw friends fighting friends over a world built on skewed ideals and values, struggling to find balance. With the ground for trust shaky, a Dark Reign brewing and the Heroic Age on the Horizon, it seemed time for THOR to return to bring symmetry to thoust world by slamming Mjolnir like a gavel and serving notice the only way he knowst how ‘KRAKKKOOOM’ 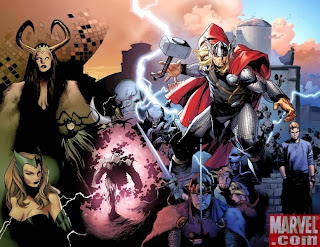 JMS with both his TV and comics work has always been the master of balancing social unease and injustice, and infusing it with the might and presence of Shakespearian melodrama. And with THOR’s return he has utilized all the mystique and bluster of a classical and ancient form re-entering and setting straight a jaded and uncertain world, with a dash of ýe őlde Norse spice. 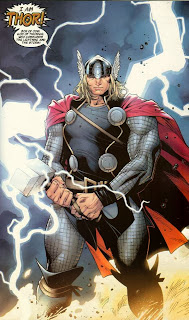 Coipel too is the perfect match for this grandiose re-awakening. He presents a THOR that seems carved from stone and proves an inspired choice in rendering the humans and THOR’s human counterpart, Donald Blake as physical counterpoints alongside a towering Asgard and its prodigal titan reborn.

The weight and size of THOR’s arrival in a sleepy Oklahoma hideaway are reminiscent of a hypothetical Superman parking the Fortress of Solitude in downtown Smallville just to get the attention. In this story THOR seems bent on demanding it, both from the other heroes who have forgotten his sacrifice, and humanity too who has forsaken his value.

‘- It is for man to decide whether or not the gods exist’ whispers Donald Blake to his other self when trying to show THOR his necessity to a wayward humankind. 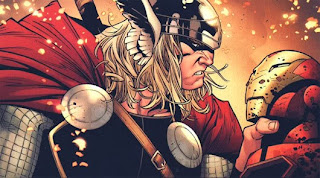 The ‘conversation’ with IRONMAN in the mid point of this trade has you understanding further why and how THOR is needed and has returned, proving indeed why his place as Avenger heavy hitter is deserved and for this month, so bestowed is his All-Star legend status.

This Legend was proudly recommended by Luke Harman.

If you have any questions, you know where to ask them. You can start to buy the Legend from this Thursday the 7th of November.

All Star Legends. The legendary titles of the highest recommendation.
Posted by All Star Comics Team at 3:09 PM