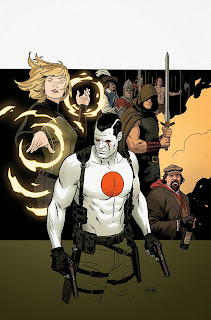 THE VALIANT #1 (OF 4)
VALIANT ENTERTAINMENT LLC
(W) Jeff Lemire, Matt Kindt (A/CA) Paolo Rivera
A battle ten millennia in the making is about to begin...

The Eternal Warrior has protected the Earth for more than 10,000 years. A master of countless weapons and long forgotten martial arts, he is guided by the Geomancers - those who speak for the Earth. During his long watch, the Eternal Warrior has failed three times. Each time, the Geomancer was killed...and a new dark age for humanity began. Each time, he was unable to stop The Immortal Enemy - a monstrous force of nature. A civilization killer. A horror that appears differently each time it arrives...and whose seemingly only purpose is to bring disorder and darkness to the world. Now, the time has come for The Immortal Enemy to return once more. But, this time, the Eternal Warrior will be ready. This
time, he has a force greater than any single warrior. This time, he has...THE VALIANT.

An entirely self-contained, new reader friendly comics event spotlighting Bloodshot, Eternal Warrior, Geomancer, and a cast of heroes and villains from across the Valiant Universe, THE VALIANT is a visionary new adventure from three of the greatest creative talents in comics today. 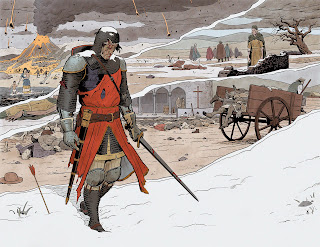 Since their re-launching a few years back, Valiant has been putting together some of the most consistently great superhero titles on the shelves, starring some incredible big name creative teams. THE VALIANT #1 mini series, out 10th of December might be their biggest creative coup to date, with stellar writers Jeff Lemire and Matt Kindt and stunning Paolo Rivera on art which you can read and see more about here: http://valiantuniverse.com/2014/07/11/jeff-lemire-matt-kindt-and-paolo-rivera-join-the-valiant-a-new-prestige-format-limited-series-beginning-in-december/

All Star is extremely excited for this new mini and thanks to both Valiant themselves and Australia's premier Valiant collector, we decided on having an amazing giveaway to celebrate the VALIANT #1's release, while trying to get you as buzzed about it as we are for it coming out. 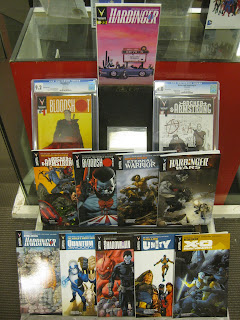 Up for grabs is this incredible line up of prizes, with special thanks to the Valiant Team and Nathanael G.

All these prizes are fantastic and a great way to boost your Valiant collection!
All you need to do to go into the draw to win is simply pre-order THE VALIANT #1. That is it!
So from today until the release of the THE VALIANT #1 anyone that add's the title to their order and purchases issue one when it comes out will automatically go into the draw! As an added bonus anyone that pre-orders this title will receive a FREE copy of both the single issues of HARBINGER #1 AND BLOODSHOT #1 when purchasing THE VALIANT #1. IT'S WIN WIN!


Terms and Conditions:
Pre-orders will get a raffle ticket when purchasing The Valiant #1, then entries will go into the All Star Barrel and winners will be drawn at random.
Entries close the day before the of release of The Valiant #1 and winners will be announced the day after release. Prizes will only be available to pick up from the store and winners must produce photo ID upon pick up.
Prizes MUST be picked up no later than a week after the draw.
Any remaining prizes after this date will be given away at our discretion to make sure they don't go to waste.

Again a massive thanks to the team at Valiant Entertainment and Nathanael G for making this promotion possible and here is too the release of THE VALIANT #1.

Posted by All Star Comics Team at 5:10 PM