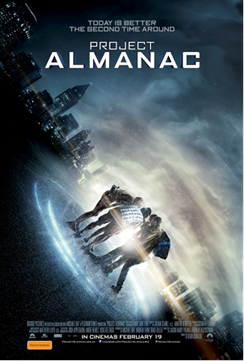 A group of teens embark on an adventure when they discover secret plans to build a time machine. Project Almanac is directed by up-and-coming filmmaker Dean Israelite from a screenplay by Jason Pagan & Andrew Stark (Paranormal Activity).

Thanks to those fantastic folks from PARAMOUNT PICTURES AUSTRALIA and PROJECT ALMANAC, in cinemas from  February 26, we have 10 Double Passes to a Special Preview Screening on Wednesday 18 February at Hoyts Cinemas Melbourne Central, 6:30pm to give away!

To go into the draw for your chance to win just tell us, "Messing with time travel is a slippery slope. If you changed something about your past to fix your future, what "butterfly effect" ripples do you imagine would happen to the world around you in the present?"

SPECIAL NOTE: As this prize is for a specific time and date, please only enter if you make the screening on Wednesday 18 February at Hoyts Cinemas Melbourne Central, 6:30pm.

A huge thanks again to PARAMOUNT PICTURES AUSTRALIA and PROJECT ALMANAC, in cinemas from  February 26

For more information head to: http://www.projectalmanac.com.au/
Posted by All Star Comics Team at 10:41 AM