ALL STAR RECOMMENDS FOR JUNE 16TH 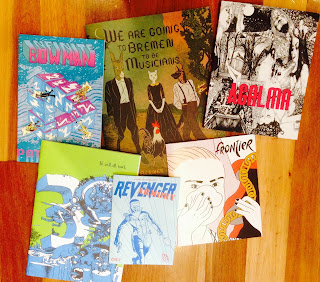 Tell you what, did I make up for last week which was as bereft of comics reading time as a Rob Liefeld book is of properly drawn feet. First up on this binge week, was a belated TCAF celebration as copies of It Will All Hurt #3, Agalma, Frontier #8 and We Are Going to Bremen to Be Musicians arrived at home from family friend, Torontonian and TCAF regular Amy Lee (thank you, Amy!).

Agalma by Stanley Wany is the most immediately notable of these books, as it resembles the intricate artwork of 2000 AD legend Arthur Ranson but gone totally stream of consciousness bonkers. Published by Montreal’s Editions Trip in a run of what looks to be only 150 copies, I’m not sure how easy it will be to find, but fans of esoteric “difficult” material such as Jodorowsky at his symbolic and multi-layered will find much joy here. Wany created the book over a years long period of intense insomnia, literally letting his subconscious do what it wanted, and the results are startlingly dreamy and abstract. Featuring a woman unable to come to terms with a past trauma plunged into the depths of her subconscious, Agalma will easily reward multiple re-readings for both symbol and meaning. It also deserves a serious psychoanalytic unpacking and hopefully someone does just that. In short - hunt Agalma down before it’s gone.

If you’re one of probably three regular readers of this thing (hi, Dave!), you’ll likely be aware of my love affair with Frontier, as I don’t go two columns without mentioning it. Featuring “Faith In Strangers” by Anna Deflorian, issue #8 keeps my ardour for the title at Pepe LePew levels of ridiculousness. Essentially about a young girl who loses her phone and then sleeps with the guy who finds it, “…Strangers” features odd, deliberately stilted dialogue (“It’s good that your gym card also gives you access to the evening activities”) perfectly matching the aloof, pouting girls Deflorian illustrates with her Charles Forsman gone hipster fashionista cartooning. Man, I love Frontier.

We Are Going to Bremen to Be Musicians, I shall save for the intro to next week, because this is running long already and it is remarkable…It Will All Hurt I will cover in its entirety later too. Pretty sure #1 is out now through Diamond, so if you like lovely, melancholy, dreamy things please do investigate in store.

In addition to the TCAF haul, the second issue of Revengerby Charles Forsman (him again!) showed up from his Oily Comics, complete with Revenger Armory, a limited edition, risographed mini-comic, co-published with Michael(COPRA) Fiffe’s Bergen Street Press. I’ll be featuring Revenger here soon enough (the first issue is in store at All Star right now, don’t wait for me to cover it, just go and get it), but I’ll make special note of the Armory special, which functions as a super cool love letter to Eliot R Brown’s old Punisher Armory specials, which I pray I’m not the only one old enough to not only remember but actually have bought. Covering everything from Revenger’s love of smoke grenades to the origin of her 1950 Mercury Monterey, Revenger Armory is arguably this winter’s coolest little comics accessory.

I also finished Infinite Bowman by Pat Aulisio, which all fans of scratchy, demented alt comics like Prison Pit should seek out as a matter of import. I even got to read the first issues of both Ryan K Lindsay and Owen Gieni’s Negative Space, which is fantastic, and made me very proud of my writerly friend and We Stand On Guard by Brian K Vaughan and Steve Scroce, a review of which I belted out in a stunned haze and will be posted sometime, I’m pretty sure. Provocative stuff that one...probably the most daring anti-war comic since Blazing Combat. I AM DYING TO TALK ABOUT IT.

But not today. Today, a twenty-year-old comic we should all remember as a classic. 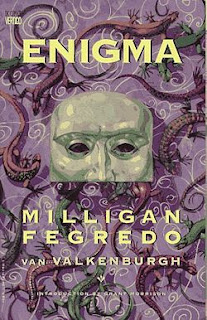 Sometimes I’m amazed by the confluence of little neural connections and real world coincidences that come together to influence thought and memory and action, even on what could be as superficial as your choice of reading material. I’m not entirely sure what prompted me to return to Enigma by Peter Milligan and Decan Fegredo, over twenty years since I last read it as one of the debut books for DC’s Vertigo line. I think I was thinking about diversity in comics and about sexuality in comics and about how a certain superhero archetype – the misfit – has shifted away from the convoluted soap opera capers of The X-Men and into more personal, yet equally impressive works like Deadly Class and They’re Not Like Us and even, at a stretch maybe, something totally “real” and hero-less like Saint Cole and TEOTFW. Then some little nagging memory reminded me that Enigma was doing all of this over two decades back...and somehow it’s kind of been forgotten.

Published in 1993, Enigma was thankfully reprinted in a 2014 collection. It remains a dense and fascinating piece of comics, at once a deconstruction of the super hero (yes, even amongst this well-trod ground), and an examination of memory, repression, freedom, sexuality, creation, metatextuality and reality. That’s an awful lot for eight issues to attempt to string together into a single narrative, but this is a Peter Milligan comic. A lack of ambition has rarely been the man’s problem.

Michael Smith is the typical comic book everyman. His life is so full of repetition and routine that he’s a stifled, repressed mess. In true comics style, however, he’s in for a life-changing shake-up when he encounters The Enigma, his favourite childhood superhero. The problem here is that The Enigma is a fictional character, created in a drugged-out haze by artist Titus Bird over the course of a three issue, crash-and-burn comics series. Compounding the problem, it’s not just The Enigma who’s showing up – his oddball rogues gallery, The Head, The Truth, Envelope Girl and The Interior League, all manifest themselves and begin terrorizing the city in their own unique ways.

Michael suspects that this all might somehow be spilling forth from his own repressed consciousness and, suddenly very much shaken from his everyday drudgery, he hits the road to find Titus Bird. Together, the two men who may or may not be responsible for it all attempt to solve the reality-bending mystery of just who and what is The Enigma. Answers may lie at a farm in rural Arizona where a quarter of a century ago, something truly awful occurred.

The weirdness in Enigma continually ramps up, but never spins out of control, peaking as the nature of creation and subjective individual realities begin to peel away like layers of onion, leading to a conclusion that’s both satisfying and moving and ties up threads in a way that few books of such complexity can manage.

Milligan has a lot of fun even as he weaves this whole narrative together. Highlights include the characters being aware, in issue four, that as there were only three issues of the “original” comic they are treading new ground, and a wonderful omniscient narrator whose reveal on the book’s final pages is as ridiculous as it is logical.

Fegredo’s artistic skill is evident even in this early work, if obviously lacking the refinement and beauty of his recent Hellboy run. Milligan throws a lot into his script that his artist must handle, yet outside of a few overly cramped pages, Fegredo’s more than up for the task. I’ve always been struck by this artist’s skill in drawing hands – his characters all exhibit such natural wristiness that it’s become, for me anyway, a distinctive trait of his work. An odd thing to mention perhaps, but it’s these kinds of nuances that distinguish an artist and go a long way in creating an actual style.

The Enigma himself is as kookily elegant a hero as has ever graced the pages of a pseudo-superhero book. His theatrical mask and garb and flowing hair the perfect outfit for a flamboyant hero of the “real” world. However, Sherilyn Van Valkenburgh’s painterly colours unfortunately appear overly dark and murky here. I don’t have my original issues on hand, so I’m not sure if this has more to do with the method and paper stock of this reprint than the colourist’s palette, but it’s a shame.

The cover copy to the collection notes that Enigma is a “foundational title in the Vertigo line” and you won’t get any disagreement from me. It is, however, more than a little sad that the bravery once exhibited by the once mighty imprint has largely been stripped away. It’s as much the fault of a decreasing readership, I suspect, as it is of the publishers, but it’s a shame that a comic so forward thinking, progressive, transgressive and of particular relevance to comics in 2015, feels like a book from not only an entirely different publisher but an entirely different time. Why no Vertigo PR effort trumpeting this puzzle box of diversity and sexuality seems to exist, I’ve no idea.

As I almost finished reading the book, I received an email from my dad. We’d been hashing a few things out, trying to unearth the roots of a particular disagreement. He signed off his email with this: “Finally, do remember that we all get trapped in the partiality of our own conscious little worlds to the detriment of others.” For such an amazing little slice of “Enigmaness” to occur at the home stretch of my re-engagement with this comics text seems almost beyond coincidence, for if this is not just about the perfect summation of Enigma and also the source of much of life’s strife, I’m not sure what is. 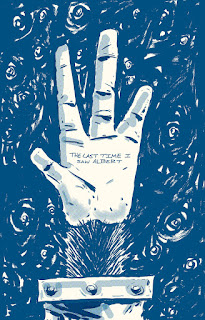 WEBCOMIC OF THE WEEK : THE LAST TIME I SAW ALBERT
By Claire Connelly

Frankly, there aren’t enough comics about space chimps. Someone should literally start an entire line of comics about simian cosmonauts and I’d read them all with baited breath and cross my fingers for a 124-part crossover as they face some Terrax The Untamed gone cosmic monkey poacher. Maybe it’s just me.

Thankfully, Claire Connelly has clearly heard my pathetic psychic pleas because The Last Time I Saw Albert fits the bill perfectly. Recalling an early Jeff Lemire with a fetish for blue inkwash and zipatone effects, Connelly’s art packs as much cuteness as it does cosmic dread – two of my other favourite things along with space chimps so she’s three for three in my book.

She’s one to watch, this Claire Connelly.

Rounding this week out and making it a possible contender for most eclectic bunch of comics material ever lumped together and gushed over, is this awesome four-minute video of “Hermit!” from Harvey Comics’ Alarming Adventures #1 (1962). Written by Al Feldstein, who never met a weird SF tale he couldn’t sink his teeth into, there’s some discrepancy with the art chores listed here as the video cites the masterful Al Williamson as sole artist, but this suggests Williamson inked over Reed Crandall pencils and subsequent Googling proved this correct. In any event, the result is beautiful, lush and combined with a winning moral – victory can come even in the most unlikely of ways – “Hermit!” is yet another vintage gem from three legendary creators.

Cameron Ashley spends a lot of time writing comics and other things you’ll likely never read. He’s the chief editor and co-publisher of Crime Factory (www.thecrimefactory.com). You can reach him @cjamesashley on Twitter.
Posted by All Star Comics Team at 11:59 AM