ALL STAR RECOMMENDS FOR JULY 14TH 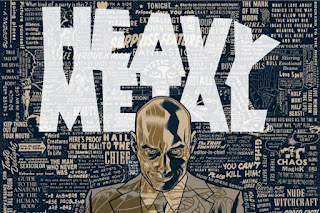 Hi. It’s Tuesday, which means me and my brain and comics. Here’s a whole bunch of questions wine-plaguing me:

Are anthologies the next big thing? Probably not, but stay with me! With the Brandon Graham-curated Island arriving this week from Image and Grant Morrison in charge of the seminal, if currently deflated, Heavy Metal as of next February, it seems as though big, chunky, high concept anthologies could be pseudo-mainstream comics’ hippest format sooner rather than later. Me? I expose my Yes Button and say, please push it. I for one welcome our Euro-formatted comic invaders.

If my unlikely hunch proves right, would it really be that surprising? We not only want more bang for our buck, but reasonably priced comics magazines chock full of content, both serialised and stand-alone, are also a rather sly way to get a certain group of readers (including...ummmmm...me) to buy things monthly again. Both Island and Heavy Metal’s “rebirth” are also logical extensions of the current trend in classic European SF comics-inspired fare and, who knows, possibly the last stage of its life cycle, yet again. Comics are an ouroboros, man, let’s face it.

Hopefully if my speculative near future antho madness comes to pass, it also gives a boost to Dark Horse Presents, which I used to consume voraciously way back when it was black and white and monthly and risky (does anyone remember The Aerialist? 1992’s most 2015 comic. Yes, I am old) and, of course, 2000 AD. Also, imagine a 100-page monthly Marvel Comics Presents resurrection, with the best of the best free to do whatever they want in any MU they want. Oooh.

Anyway, I’m very excited about Island and I’m so excited about Heavy Metal that as of next column, I’m instituting a countdown by briefly looking at every single issue of the magazine, one issue a week, right up until the release of Moz Metal.

Yes, I am giving myself more work because I am silly like that. 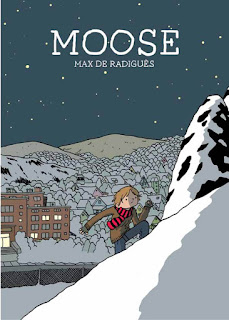 Occasionally something comes along that completely derails my plans for this column as I become unexpectedly and totally obsessed with it. This week that something is Moose, by Canadian creator Max De Radigues. Originally published in serialised mini-comics format by Charles Forsman’s Oily Comics, Moose has been collected in its entirety by Conundrum International.

Joe is a sensitive and unpopular high school student who escapes some truly abhorrent bullying by slipping off into his small town surroundings to enjoy the wide open, snowy expanse of the landscape as well as the animals that populate it. He spots a big bull of a moose on one of these outings and the two share a tense moment before the animal realises that Joe means him no harm and disappears amongst the snow and the trees. The moose reappears, seemingly only to Joe himself, and becomes an object of fascination for the boy. Jason is Joe’s bully, a cruel, incredibly sadistic kid, whose bullying constantly escalates in cruelty and violence.

Both boys lack parental figures – Joe is raised by his grandmother and single mother, Jason by his grandparents and have clearly experienced some trauma in their development. This, however, is where the similarities between them end and when Jason follows Joe out into the wilderness one day, their conflict inevitably comes to a head.

One of the most intriguing aspects of Moose is the contrast of the two worlds, the two “natures,” presented. We have the school itself, bound by its own pecking order of cruelty, where Joe (the small, weak prey) can only feel safe by hiding himself in nests and burrows like the janitor’s closet or the sick bay. Making this cleverly apparent is a picture above the sick bay bed of an unborn baby sleeping in the womb hanging directly above Joe as he curls into the foetal position and snatches some rest, safe for now in this otherwise hostile environment. Contrast this with the world outside the school, mountainous and ice cold, a seemingly inhospitable environment, filled with predators of its own, yet one in which Joe is at home and always safe, despite his elders telling him “the woods are dangerous.” Jason, however, is not as home here as you would imagine one so predatory to be and his punishment for this trespass is brilliantly executed.

It’s difficult to say too much more without spoiling the work, but outside of De Radigues’ simple yet strikingly effective cartooning, I would also like to make note of his excellent little technical trick of inverting the tail of off-speaking word balloons to indicate the speech coming from outside his chosen shot. It’s a neat and innovative trick, one I can’t recall if I’ve seen before off the top of my head.

Moose will undoubtedly land in my own personal top ten of the year -- and it’s already been a very good year so far. Pop in store and pick up this handsomely designed heartbreaker of a book.

So if you’re interested in playing the All Star Recommends drinking game, here is the single, simple rule: one shot for every mention of Frontier, Charles Forsman, or Emily Carroll.

Go back and take a shot for the earlier Forsman reference and refill because Emily Carroll is back yet again!

Seriously though, what a great idea this Songs Illustrated feature is. I’d cut the tip of a pinky off Yakuza style with a butter knife if Paste would let me curate it. Here’s the incomparable Ms Carroll’s comics take on “Wild Creatures” by Neko Case. What I did (but do it however you want) was read the comic, then listen to the song and then read the comic again with the song playing.

It’s like wine and cheese, bacon and eggs, Pizzolatto and McConaughey, Morrison and Quietly.

Here’s a link to the song:

And here’s a link to this marvellous little comic:


COMICS VIDEO OF THE WEEK
CHAOS MAGIC, THE OCCULT AND SHAMANIC SIGIL CREATION

Way back in 1999, when Grant Morrison was wrapping up The Invisibles, he appeared at DisinfoCon to give a loaded, rambling, occasionally obnoxious, but utterly fascinating presentation on time, space, reality, magic and alien abduction. It’s become somewhat notorious over the years and really does need to be seen at least once. Thankfully, it’s been uploaded to YouTube, so I don’t have to lend you my DVD. Here he is, the brand-new EIC of Heavy Metal in his most abrasively punkish, sweary incarnation.

Cameron Ashley spends a lot of time writing comics and other things you’ll likely never read. He’s the chief editor and co-publisher of Crime Factory (www.thecrimefactory.com). You can reach him @cjamesashley on Twitter.
Posted by All Star Comics Team at 12:06 PM