ALL STAR RECOMMENDS FOR SEPTEMBER 15TH 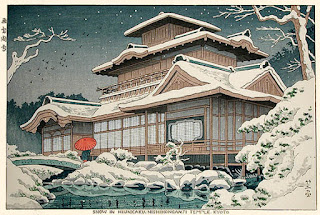 I really have no idea what to write here, as I still did not find the time to finish those Diabolik comics, making me both an unreliable columnist and a terrible human being. I’ll be in Kyoto when this one drops for a few quiet days of temples before my liver has to man up and face the fact that we’re returning to Tokyo and he has work to do. 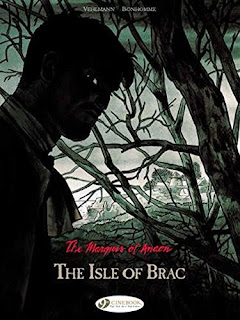 COMIC OF THE WEEK : THE MARQUIS OF ANAON: THE ISLE OF BRAC
By Fabien Vehlmann & Matthhieu Bonhomme
Published By Cinebook

“When gales buffet the seas surrounding the isle of Brac, it is said that one may hear the voices of the dead, that they speak to the living bewailing misfortunes that lie ahead.”

So begins “The Isle of Brac,” the first volume of The Marquis of Anaon. It’s an evocative start to a moody, suspenseful work of bande desinee.

Jean-Baptiste Poulain arrives by boat at the isle of Brac, wearing his newest and best finery in an effort to impress his new employer, Baron Gwenole, a man spoken of in whispers as “The Ogre.” The natives, immediately coming off as both impoverished and somewhat backward, fawn over him, remarking that in his tri-corner hat he looks well to do, like a “young Marquis.” For their attention, they are beaten and whipped by Yvon, one of the Baron’s servants, the first hint of many at mistreatment and cruelty on the isle.

Poulain has arrived in Brac to tutor Nolwen, Baron Gwenole’s son. However, when Nolwen is found beaten to death, the isle’s secrets, superstitions and possible supernatural connections begin to reveal themselves. Poulain, trapped on Brac, a place supposedly in touch with the realm of the after life, becomes something of a reluctant protagonist. Having suffered serious childhood traumas of his own, Nolwen’s death hits Poulain hard and, marked as an outsider on a isle full of outsiders cut off from the rest of the world, he finds himself in ever-increasing danger and is drawn closer and closer to the terrible secrets surrounding Nolwen’s death. “This isle is making me ill,” Poulain says, overwhelmed by death, dread and local myth, yet trapped on Brac, he has no other choice than to find the resolve to dig into the mystery surrounding the murder.


Velhmann’s other translated work includes the All Star Recommended Beautiful Darkness with illustrators Kearscoet (D&Q) and the (personally) disappointingly scripted 7 Psychopaths with Sean Phillips on art chores (Boom). Velhmann’s writing here is at once taut and expansive – a lot is packed into these 48 pages, yet the pacing is perfect – and with echoes of Dumas, Hugo and a dose of the gothic-mystery of Le Fanu, the story also packs some welcome sophistication.

Sumptuous pages, generously oversized in the European album format, not only showcase Bonhomme’s art in all its expressive favour but also creates a nostalgia-boost as it links back to Tintin, Asterix and Lucky Luke, the oversize paperback books that were so important to me personally as a kid. Bonhomme’s beautiful cartooning resembles something like Tonci Zonjic and Goran Sudzuka teaming up on an expansive period piece, and proves to be as lovely as that idea sounds. His characters are distinctive, expressive and beautifully realised and the sinister microcosm of Anoan feels expansive and real and from Brac’s knobbly brickwork to its skeletal trees, to its menacing waves, his work is absolutely superb. Brac’s woods are given a fittingly spooky atmosphere, especially during a particularly taut chase sequence. The fear on Poulain’s face is apparent as he faces death on multiple occasions as is the despair he feels as he fears the malevolent Isle is claiming his very sanity. Baron Gwenole in particular looks both cuddly and menacingly burly, his face moving from the peaceful to the glowering from panel to panel.

Come for the costuming and the visual world-building and stay for a clinic on scripting the (relatively) short-form mystery comic. Although this volume is completely self-contained for the new reader (and functioning also as something of an origin story for its hero), four volumes of The Marquis of Anaon were published in France and with Cinebook promising more in the English language, I anxiously await the release of volume two – The Black Virgin. 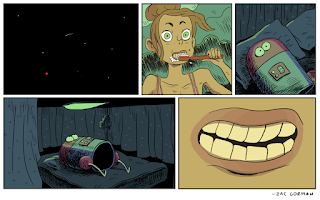 WEBCOMIC OF THE WEEK : A THOUSAND DAYS
By Zac Gorman

The clock’s ticking here. Zac Gorman promises that A Thousand Days, his new webcomic, will last exactly that – one thousand days. Updated sporadically (there appear to only be three strips so far), Gorman has promised that his lead character, possibly the most adorable little robot ever, will die on April 22, 2018.

The robot, awakening alone aboard a spaceship, tries to recount what’s brought him to this end point and, presumably from the latest strip as I type this, flashbacks will be involved as memories return. In this interview at Zainab Akhtar’s always-terrific Comics and Cola site, Gorman says that he’ll just pretty much pop in and out of his robot’s last days, depicting whatever it is he’s doing at that particular moment.

It hasn’t been updated in over a month, so hopefully Gorman gets back to the drawing board and we can all stop fretting about the little dude and find out just what’s going on pretty soon. “Each day is a gift,” Gorman says at the site and I have a feeling that, on April 22, 2018, we’ll be reminded of that fact rather poignantly. 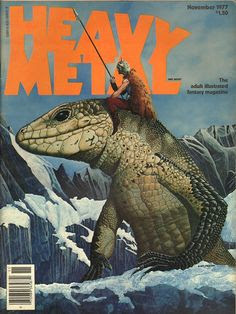 Chapter Four of Moebius’ “The Airtight Garage of Jerry Cornelius” kicks this issue off, with Moebius’ panels at their scratchiest and tiniest – there are eighteen panels on three of the four pages herein – and it is a thing to behold. Those familiar with classic SF books but perhaps not “…Garage” might be wondering what Michael Moorcock’s Jerry Cornelius is doing in a Moebius strip. Moorcock, ever awesome, at one point decided that anyone who wanted to use Jerry Cornelius could just go ahead and do so, yet time and the murkiness of rights prevailed and Moebius’ series was later altered to reflect this (Wikipedia tells us that Moorcock did not withdraw permission himself). None of this really matters as the comic makes little sense at this point, as Major Grubert’s spy Samuel I Mohad travels to Grubert’s security base, feared invaded and “fallen into enemy hands”, inside the Star Billiard, a giant humanoid robot that wears a Phantom costume, compete with domino mask and striped undies.

But not only does Moebius turn in “…Garage” but also one of my favourite of his short works, “Ballade.” Set in a ridiculously intricate alien forest, a daytripper astride some odd, alien ostrich attracts the attention of a local wood nymph, bemused by the Rimbaud poetry the tourist quotes. The city-dweller convinces the nymph, Loona, to accompany him back to civilisation, where “giant ships…float and fly.” Once they reach the savannah, however, they are mown down by the bullets of soldiers on their way to find their “real” enemy. A million meanings could be made of this piece, but my favourite is that perhaps, subconsciously, it’s a statement about the real world constantly, incessantly, imposing itself on Moebius’ imaginative life, forcing him to watch clocks, pay bills and spend more and more time away from his drawing table. I admit I could totally be reaching with that one, but whatever its ultimate meaning (if indeed there is one), “Ballade” is six pages of full-colour Moebius and there are few finer things within the medium than that.

Picaret and Tardi’s “Polonius” comes to its inevitably downbeat and fatalistic finale, with carrion birds circling the corpse-strewn city of Ru which has succumbed to its own near-biblical hedonism. What a strange ride this strip has been. I guess it’s unsurprising given that Tardi’s work adapting Jean-Patrick Manchette’s uber-noir novels shows his tastes can run quite dark, but even considering that, “Polonius” has to be one of the bleakest comics of all time, gleefully subverting every heroic expectation or even glimmer of possible redemption at every turn. Polonius, the escaped slave, fails to save the city from itself, fails free his lover from prostitution, fails to become some benevolent king as the opening chapter of this narrative would suggest based purely on our own expectations of the hero’s journey. Not only that, but he is instead broken by the corruption and the vice, succumbing utterly to it. Even the poor soul that Polonius comes across as he gloomily leaves Ru, a criminal “condemned to dig this pit until the end” of his days, has more purpose than he does.

As plague rips through the city, Polonius feels drawn to return (he can’t even leave properly!) and we end as he sits alone amongst the feeding carrion birds, which pick the blight from the place far more thoroughly than he ever could. A truly decadent, disturbing and bleak read, I’m hoping we get a collected edition somewhere down the road for this true narrative oddity.

Also in this issue, Harlan Ellison (!) turns in a cracking bit of prose, “How’s the NightLife on Cissalda”, Bazolli and Caza turn in “Bird of Dust” a pretty fabulous stoner metaphor for the circle of life as fantasy, as a naked, sword-wielding warrior (no this isn’t “Den” which, oddly, this story immediately follows) rises from the cosmic mists anew, “to unravel knotted abstractions, forms and destinies. To fulfil stellar longings,” and plunges his mighty blade into the cranium of the cosmic phoenix which he stands atop, killing it and then curling up into the foetal position to await his next grand slaughter. Faaaarrrr Ouuuutttttt….

Chantal Montellier continues her scathing, sadly still totally relevant attack on stupid men in two chapters of her “1996.” The first is a single page featuring crippled, shattered shells of former soldiers as a televised President says behind them, “Ah bleeve yawul stanby the teem thaz winnin!” Potent stuff. The second, the first chapter in an extended piece about a former Caucasian boxing, unable to box anymore due to a law that forbids “citizens of the white race” from participating in “dangerous or professional sports.” Why this strip has not been collected and distributed widely in the last thirty years is beyond me. Like much of these early HM issues, “1996” sadly feels like a lost classic.

And finally, we must mention Jean-Michel Nicollet’s “Master, ” which like “Polonius,” also subverts expectation by having its sexy, leather-clad, last-girl-on-earth turn out to be trans-gendered, completely flummoxing the local male tyrant and shattering his dreams of forcing her into propagating the species. The full frontal shot of our trans-hero, revealing both breasts and penis with a smirk of steely-eyed satisfaction is absolutely priceless.

As you read this, I’m likely on a manga hunt. On my list: more Katsuya Terada art books to join Terra’s Cover Girls and Katsuya Terada ZENBU on my groaning shelves. Cover Girls is particularly awesome, an IDW Artist’s Edition-sized volume published in 2000, complete with a sticker book (which I’ve never been able to bring myself to use) a cloth wall hanging, and over a hundred of Terra’s eye-poppingly designed oddball heroines. More please.

Here’s the man himself, bashing out one of his staples, a hot pot girl.

Cameron Ashley spends a lot of time writing comics and other things you’ll likely never read. He’s the chief editor and co-publisher of Crime Factory (www.thecrimefactory.com). You can reach him @cjamesashley on Twitter.
Posted by All Star Comics Team at 2:18 PM