ALL STAR RECOMMENDS FOR NOVEMBER 17TH 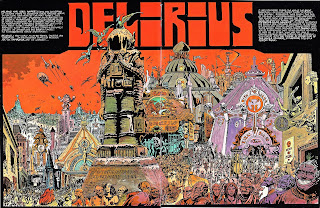 My what fine comics readers you all are, ordering Philippe Druillet’s Lone Sloane: Delirius in such quantities that it hit the top end of All Star’s weekly “Most Ordered” chart last week. With that news goes all guilt I feel over relentlessly gushing over Druillet every week here in my Heavy Metal recaps. Just as well – he has two stories in this week’s issue…

If you have no idea what I’m on about here once again, is the full Delirius comic, in video form, for you to sample. 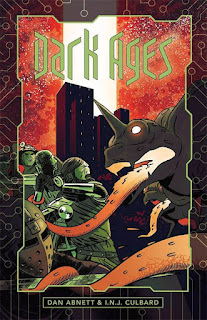 It’s 1333 a mercenary named Hawkherst leads a small team of roughneck, coin-hungry mercenaries across Europe. “There is talk of a war coming,” Hawkherst muses, I ‘ope it lasts for a hundred years.”
Hawkherst prays to God only for war, but his atheistic second, “Lucifer” Galvin, prays not at all. Lucifer finds himself in charge after a creature of seemingly demonic origin attacks the company and Hawkherst is gravely wounded in the battle. The only place of refuge for the company, as more and more demons appear and the corpses of the dead comrades begin to reanimate themselves and join this macabre army, turns out to be a monastery full of monks who have taken a vow of silence but also happen to have a great secret buried inside their walls.

As demons and zombies swarm the monastery, Lucifer is forced to not only plan for war, but also re-examine the nature of his beliefs in the face of what first appear to be “servants of the counter Christ.” The creatures, of course, are not demons, but alien visitors bent on conquest (this is no spoiler, don’t worry). Fortunately, it will take man of Lucifer’s atheistic leanings and lack of theological superstition to comprehend the true nature of what it is he and his men face as the complexities of both the known and unknown universes are revealed to him.

Packed full of surprises, Dark Ages is a superb blending of historical fantasy, horror and weird SF. The prolific Culbard, a real favourite of mine, provides both the creepy atmospherics and startling creature design of his stellar Lovecraft adaptations and proves to be just as at home in the early 14th century as he does literally everywhere else. His huge, climactic battle has the feel of epic cinema about it as his heroes swing sharpened steel at sprawling enemies without and clandestine enemies within. His aliens arrive in perfectly ominous cosmic portends of upended, midnight-black obelisks and distant geometric starburst formations. Special mention must be made of both the heathen Lucifer, whose eyes gaze with icy intelligence and whose furrowed brow initially forms an ironic cross on the centre of his forehead and Captain Hawkherst who is, right down to his posture, the consummate vision of epic fantasy heroics.

Abnett keeps the tension high, the pace breakneck, the battles bloody, his characters bristling and brave and distinctively voiced. There’s a real chemistry with this creative team – also responsible for The New Deadwardians and Wild’s End – who are clearly fond of pushing themselves into ever differing narrative turf with each subsequent project. With Dark Ages, Abnett and Culbard deliver a superbly crafted comic that you’ll likely blaze through, as I did, in a single sitting. 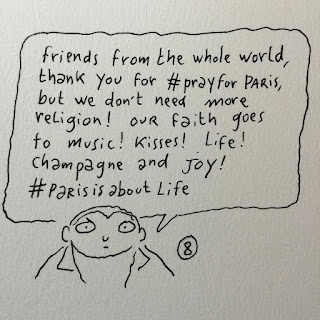 WEBCOMIC OF THE WEEK : JOANN SFAR’S INSTAGRAM STATEMENT ABOUT VIOLENCE IN PARIS

I found this at Tom Spurgeon’s Comics Reporter. I don’t really have much to add other than I think that the glib hashtagging of anything this truly, shockingly awful, however well intentioned, is slightly distasteful.

Enki Bilal (The Niktopol Trilogy – another of 2016’s reprints to watch for. I’ll cover that closer to re-release) is up next with “The Death of Orloan.” Arriving on some “unknown planet” like a drunken space pirate is the blood-drinking Orloan who’s come looking for his stash of “mauve gold.” Unfortunately, so have many other versions of his very own self who arrive, somehow, to thwart him from various dimensions, parallel universes or perhaps from the depths of his own mind. With each version of Orloan believing the gold is his to claim, our original Orloan fights and claws his way through them in a gorgeous fit of Moebius-like detail, grandly murdering many with his space Tommy gun.

Alain Voss’ “Heilman” is back for its second chapter, as our hero, now dead for seven days after repelling that demon with naught but his mighty riffing, awakens in an Escher-esque afterlife, beats up an “oppressively authoritative” creature (a strange complaint for a Nazi glam rocker to make), and challenges his long-dead childhood guitar hero to a guitar-duel of such intensity that bystanders are maimed by the pure, sonic, riffage of it all. Crucified on a giant guitar, Heilman is then visited by Elvis Presley who celebrates the destruction of Heilman’s “material guise” as naked groupies cavort. To be continued.

Heilman: where have you been all my life?

As hinted at in this week’s intro, Druillet’s “Gail,” a Lone Sloane adventure, returns with its second part a year after it debuted. As usual, Druillet’s scratchy cosmic evil and ridiculously intricate double-page spreads prove to be a show stealer even if very littler happens – antagonists of demonic intent are introduced and the transport ship carrying Sloane and hundreds of other prisoners arrives at space prison Holy Mary Mother of the Angels. That’s it for the plot, but these pages are designed to overload with their sense of scale, not the fastidiousness of their story.

Both “Barbarella” and “1996” sadly wrap their Heavy Metal runs, with the latter remaining a most deserved contender for Strange Series Most In Need of Reprinting. But no time for lamentation -- Druillet’s not done this issue and he’s brought some back up for “The Story of the Acrylic Magus and His Vibratory Perturbations.”

Scripted by Druillet and astonishingly drawn by Serge Bihannic, “Acrylic Magus” is a typically freaked-out Druillet number, featuring a nameless protagonist, frequently mumbling to himself, making his way across a barren landscape only to stumble upon the lair of the Acrylic Magus, a magician conjuring forth cosmic horrors from the beyond simply by painting them. This magus, clearly driven mad by gazing into the maw of the beyond for so long, illustrates canvases of swirling faraway galaxies with a paintbrush in each hand. Ending on a cliffhanger with the promise of more, let’s hope that unlike “Gail” it’s not a year before we see the continuation of this one. Bihhannic’s Lovecraftian horrors are almost impossibly detailed in pen and ink, birthed from the Magus’ void in a mass of multiple heads, fleshy tendrils and thorny spikes, creatures that seem to have no beginning and no end, existing as simply a mass presence.

Another solid issue, rounded out by more “Orion” and “More Than Human,” the second half of 1978 promises to be as wild as the first.

Yes, you’ve probably all seen this by now, but it had to be included for the simple fact that since this trailer for AMC’s upcoming adaptation debuted, Mrs Ashley has wanted to do nothing but read Preacher. She’s got it in her hands constantly, refusing to look away from the pages and giving me a cursory “uh huh” or “sure” as I try and talk to her, followed up with a laugh or a curse as she interacts with Jesse Custer and Co. instead of me. I suspect my relationship might not be the only one being ruined by the insidious follow-on effect of the trailer as Bleeding Cool reported that Preacher smashed its way back into the Graphic Novel Top 10 and Amazon stocks were at a ridiculous low level.

Watch with your partner at your own peril:

Posted by All Star Comics Team at 7:49 PM