ALL STAR RECOMMENDS FOR MAY 24TH

Determined to cram this column full of as much global comics goodness as possible, over the next few weeks I’ll be featuring some fairly extensive reviews.

A look the jaw-dropping Die Wergelder, (Hiroaki Samura’s follow-up to Blade of the Immortal) and its immensely clever updating of a particularly Japanese film genre (Pinky Violence) is on the way because I am both utterly besotted and thoroughly obsessed with this manga. I’ll be pairing it with a look at Sarah Horrocks’ “Crepax goes giallo” webcomic, The Leopard, for maximum oddness and maximum beauty.

A detailed look at two very different comics both set in art galleries (Guardians of The Louvre and Hubert) is in the works and a journey through the surreal, nightmarish masterwork Peplum by Blutch is also forthcoming.

Don McGregor’s 1970s run scripting Black Panther in Jungle Action (available in Essential Black Panther vol.1) is the subject of yet another piece on the way, I will finally be getting around to yammering on about Enki Bilal’s Nikopol Trilogy and with the arrival of the third volume of my beloved Marquis of Anaon series imminent, you can expect the reviews of that series to continue. And with even more, more, moooore planned, I’ve totally got your back for the foreseeable.

Next week? Well, to celebrate the creation of The All Star Comics’ Kid’s Club, it will be an All Ages Comics fiesta with a total bounty of classic kids material both old and new. There will be no comics about drugs, violence, depressing philosophical theory, political satire or the potentially detrimental effect of urban sprawl on man’s psychological state. I know, I can’t believe it either.

This week, however, it’s a freshly translated piece of underground bandes dessinee, so let’s hop to it. 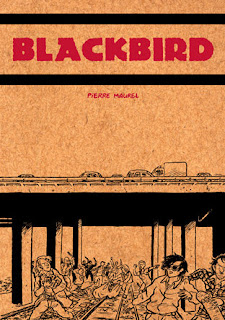 COMIC OF THE WEEK : BLACKBIRD
By Pierre Maurel
Published By Conundrum International

"…you can either make the best comics you can or you can be a good boy for your editors." – Darwyn Cooke to Ed Piskor (as quoted at The Comics Reporter)

In the spirit of the above quote from the late, great(est) Darwyn Cooke comes Pierre Maurel’s Blackbird, originally published in French, disseminated in minicomics form, and now collected and translated by those purveyors of comics excellence, Canada’s Conundrum International.

Far removed from the usual lushly illustrative French existential cosmic madness I usually bang on about here, Blackbird sees a collective of anarchic, skateboarding, zine-making troublemakers finding themselves at the wrong end of a newly passed law that prevents self-publishing. What this means is that “legitimate” publishers are given full control over what is and is not available for public reading consumption and that their own hand-made, hand-distributed work is now highly illegal.

It’s a concept that works on multiple levels – the repulsiveness and greed of corporate publishing and the arrogance of “tastemakers” in judging what is allowed both in content and format immediately come to mind (I am reminded of a particularly well-known Australian novelist who, when judging a genre award a couple of years back, reacted to the question, “Should we consider ebooks?”with an elitist, “Fuck that!”). Deeper than this, however, Blackbird gives us the birth of a dystopia where corporate interest and mandated censorship collide. Enforcement officers crack down harshly on any who break this “offence,” a law that stifles creativity and free thought and puts artistic expression firmly in the hands of the wealthy clinging to old models of business and the lawmakers keen to control expression and suffocate The Arts.

Conundrum has done an excellent job formatting and designing this book, giving the volume a thick, brown cardboard cover that brings to mind the “de-enhanced” cover Grant Morrison had on an issue of The Invisibles way back in the day. This book literally looks and feels like a collection of subversive minicomics, perfect for the style, tone and aesthetic of the work.

Artistically, Maurel’s work is a little Charles Forsman, a little Josh Simmons, perfectly cartoonish and low-fi and urgent. His fluid skateboarding sequences are a particular visual highlight, as is the body language of his characters and the determination and seriousness of their expressions as they create their art. None of Maurel’s characters are named, but each member of this collective is distinctive as they work away on their forbidden zine-turned-manifesto and navigate the suddenly-dangerous waters of print and distribution, which now sees them, in the eyes of the law, as acting with a new-century terrorist intent. The gang launches attacks on the lawmakers and politicians, coating them with heavy splashes of ink, displaying their distain for their authority non-violently (with one unfortunate exception) and symbolically. With one of the group even scoring a “legitimate” publishing deal, a moral and artistic quandary is also explored – the concept of “selling out” is more potent than ever in this new world of government regulated publishing as is the irony of “true art” being plucked from in the now-banned underground and legitimised by the system. Oh and editorial interference, let’s not forget about that, there’s a good dash of that tossed in as well.

There is also more subtlety here than you may expect. Blackbird has no interest in bludgeoning you with its punk rock ethos, its rallying cry against the corporate appropriation of the word and the image. It’s so good it doesn’t need to. However, with the recent massive cuts to The Arts in this particular country and the proposed changes to copyright law threatening to cripple Australian Literature, local Arts-loving readers may feel the sting of the book and hopefully heed its angry rallying cry of, fuck ‘em, just make it anyway all the more potently.

It’s worth noting that despite the pessimism of both Blackbird’s world and this review (sorry!) that the comic’s most excellent publisher, Conundrum International, receives grants from the Canadian Government, a government that also just announced a 1.9 billion dollar investment in its Arts culture. The germ of dystopia that rapidly grows through Blackbird won’t be found anywhere near our Commonwealth brethren and their snowy climes, at least in the next half decade, so take heart and make sure you attend a TCAF to experience a kind of comics utopia. Also, pick up Blackbird. Read it. Play some punk records and go make some art. The only thing stopping you, ultimately, is you. 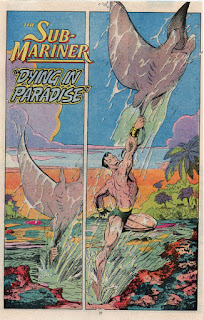 Yes, Jim Lee makes his way into this column for the first (and probably last) time! From Marvel Comics Presents #83 (1989) comes a typically political piece of comics scripting from Don McGregor, a writer famed for his voluminous dialogue on stints writing Black Panther and Killraven (among many other titles), who goes completely silent in this short story featuring Namor, The Sub-Mariner. I, for one, would love to see Namor get back to being a pro-environment badass and this terrific (if artistically-dated) short is a reminder of exactly that particular characterisation. Pop on over to the indispensible Bristol Board site as this story does quite a lot in a very short space.

“I’m not going to retire. They are going to have to suffer the ignominy of firing a 95-year-old man, “ says Al Jaffee with a twinkle in his eye and a sly grin on his face at the end of this touching little profile. A legend and a gentleman, Jaffee, with astonishing clarity and recall for a man of his years, takes viewers through the birth of the Mad-fold in. Really sweet, gracious and modest stuff from a man whose innovation has him earmarked for cartooning immortality.