ALL STAR RECOMMENDS FOR JULY 19TH 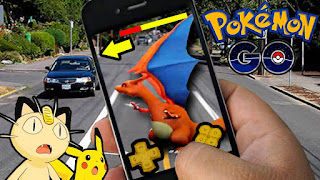 If you’ve noticed a darker shade of grey under the eyes of your favourite comic book store clerk, you can blame the latest global eruption of Pokémon, claiming the time, the sleep and the attention span of monster collectors everywhere. I jokingly pointed out to Jimmy, the clear ringleader of the All Star Pokémonposse, that Reuters had an article discussing the workplace hazards of Pokémon Go, but as Jimmy does not drive a forklift (yet – given the increasing shipment size to our fave store this particular skill may yet be needed) he seemed justifiably nonplussed. Jen admitted to me that her excitement over catching a monster nearly led to her poor husband having a heart attack and/or car crash whilst driving, and Cazz...well let’s just say I don’t think she will ever be quite the same again, even though this former vet nurse should really be firmly against the capture, confinement, and inter-species fighting of wild creatures, don’t you think? On and on it spreads until it inevitably leaves Mitch, poor, stoic Mitch, to fend off the invasion of these beasties from the doors of the shop and the brains of his co-workers.

It’s an odd thing, the mass return of Pokémon, coming back into the zeitgeist in a truly mammoth way. It never truly disappeared, I guess. In fact, my two nephews were obsessed with the franchise for well over a decade and could catalogue pocket monsters at will in a scattergun frenzy of strange names that sounded occultish and vaguely sorcerous to my puritan ears, like Helen Mirren using the Charm of Making in Excalibur. But the fact that Pokémon Go has caught on globally faster than a deadly pandemic surely must have caught more than just your humble columnist by surprise. It does, however, make Kieron Gillen’s Modded, currently running in the Cinema Purgatorio anthology, seem even more brilliant.

And in a weird coincidence, this week’s featured comic features childhood monsters of an entirely different and far more sinister sort, in a book where the established roles of captive and captor threaten to flip... 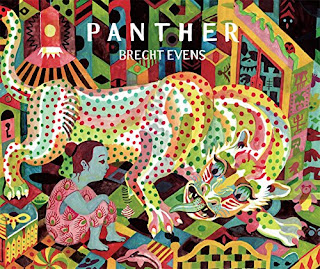 COMIC OF THE WEEK : PANTHER
By Brecht Evens
Published By Drawn & Quarterly

Disguised as a children's picture book, Belgian artist Brecht Evens' Panther is anything but innocent. Loaded with as much unease and discomfort as anything you'll likely encounter this year, the book's gorgeous art, bright colours and landscape-formatted pages lure the reader in with both visual and tactile reminders of childhood reading and then shreds it all, cleverly subverting the joy of the children's picture book, and with it the joy of childhood itself, through high tension, genuine cerebral horror and moments of creeping perversity.

Little Christine's beloved cat has died and her father is unable to comfort her. Retreating to her room, Christine is suddenly visited by a massive, anthropomorphic "big cat" that emerges from her dresser drawer. The cat calls himself Panther and proclaims himself to be the king of Pantherland, a magical realm populated with all manner of fantastic creatures. Consoling Christine over her loss, Panther begins to tell her stories of his homeland, but something's off almost immediately as inconsistencies and horrors are hastily retold and eliminated based on Christine's reaction to the tales. It's clear that Panther is contriving these stories on the spot. Panther, chameleon-like, shifts form constantly during his storytelling - he can appear sphinx-like, cartoonishly adorable, austere and noble, fierce and deadly, and Evans shifts his vibrant painted colours to match. Panther soon becomes Christine’s best friend and she begins to retreat into her room more and more frequently, ever closer to the Pantherland awaiting her on the other side of her dresser drawers. Christine’s father, unaware of this new visitor, leaves his daughter to her grief, giving her the space she needs to heal. Christine's interactions with her single dad add real warmth to the book and further heighten the ever-increasing inappropriateness of Panther's secret friendship with this charming, imaginative little girl. It does, however, raise some questions -- if, IF, Panther is an imaginary "friend," Christine has been through some trauma...

The book grows ever darker as the pages turn and I refuse to reveal any more plot as so much of the story is carried by the interactions of the two main characters. Suffice it to say that as the increasingly nightmarish intensity is built up to near nail-biting levels you will genuinely worry for Christine - her state of mind and her physical safety both -- and it's a testament to Even's storytelling skills that he's able to create so much dread and unease on the page with such subtlety. The lack of true resolution and explanation may frustrate some readers but to others (like me), who feel the impact of the book on them once the covers are finally closed and dig through Panther's symbolic and narrative possibilities, will find will have plenty to ponder.

Fully painted, Panther is a visual knockout. From the near Escher-like qualities of the interior of Christine's house, to the shape-shifting Trickster that is Panther himself, to full double splashes of Christine's bedroom when the lights go out and the space is filled with all manner of otherworldly creatures, Evens is somehow is able to lace his dreamy, pretty art with absolute menace - a rare gift. Gridless pages are filled with both lush colour and masterful use of negative space - the crisp white of the paper making Evens' subsequent colour-bomb splashes all the more potent to your eyeballs: 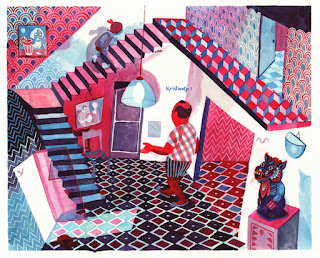 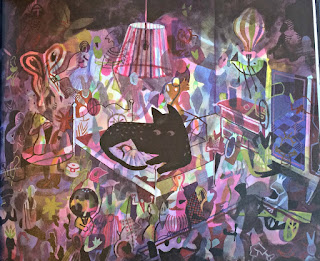 Panther is thus far the year's most singular new work, a strange storybook horrorshow packed with a truly surprising amount of suspense. While I personally do not want to go where these particular wild things are there's no doubt in my mind that Brecht Evans' Panther is the year's most affecting and unlikely slice of mind-bending comics psycho-horror. An absolutely flawless piece of comics and a simply beautiful and stylish book from content to format to design, the fact I have to stop myself from continuing here should speak volumes about the height of its quality. Panther is an absolute triumph of the art form. 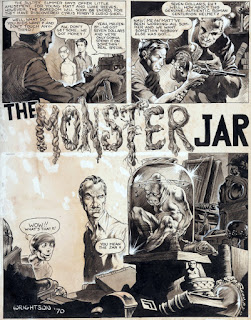 WEBCOMIC OF THE WEEK : THE MONSTER JAR
By Bernie Wrightson

Cyrus Fenby needs no stinkin' smart phone app to collect monsters - he's got the real thing pickling in a jar and selling in his curio shop. If you take him at his word that is. Two curious and intrepid kids believe Cyrus, purchase the jar at a steal and begin following the instructions to make their new pet monster grow. Meanwhile another customer comes to Fenby looking for the jar, offering top dollar, and Fenby decides to retrieve it from the kids and make a serious profit. However, as things so frequently do in short horror comics, things go more than just a little awry.

The Monster Jar (1970) comes to us via The Bristol Board, an amazing Tumblr site I regularly raid for content here, and is notable for not just being a Bernie Wrightson-illustrated story, but an unpublished one at that. It's typical Wrightson, that titan of horror comics - moody and dark, his slightly stretched-out, angular figures adding extra unease to proceedings, his setting suitably shadowy and gothic. Have a look and remember: never buy grotesque trinkets from strange men with moustaches.

COMICS VIDEO OF THE WEEK : WEREWOLF BY NIGHT PART ONE

And where would any good week of monsters be without an old-fashioned man-monster?

One of my personal favourite publishing highlights of this year was the arrival of the Werewolf By Night omnibus, collecting in entirety the classic '70s Marvel comic. Here, set to some slightly incongruous classical music, is the first appearance of Jack Russell (no kidding), Marvel's resident werewolf-hero. Classic Marvel horror of the '70s is always a good time - from the Gene Colon drawn Tomb of Dracula, to Mike Ploog's excellent lycanthrope, viewable here with but a click of a link, and if you've always been curious about this little pocket of Marvel history, this video is not a bad place to start.

Cameron Ashley spends a lot of time writing comics and other things you'll likely never read. He's the chief editor and co-publisher of Crime Factory (www.thecrimefactory.com). You can reach him @cjamesashley on Twitter.
Posted by All Star Comics Team at 12:05 PM