ALL STAR RECOMMENDS FOR JUNE 27TH 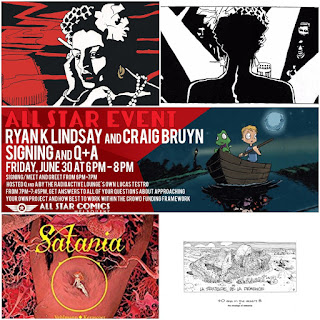 With this column now on a fortnightly schedule, the reviews may not be quite as on-the-pulse as I often attempted to make them, but at least no dust gathers on the ol' crystal ball. Coming in November from NBM is a book so promising that I'd be gobsmacked if it weren’t a sure-fire best of the year contender: Satania by Fabien Vehlmann and the husband and wife illustrative team of Kerascoet.
Long-suffering readers of this column may well be sick of Vehlmann's name by this point as he's the writer of my beloved Marquis of Anaon series from Cinebook. Kerascoet beautifully drew the superlative, must-read Miss Don't Touch Me and Beauty, both also for NBM, and previously teamed with Vehlmann for the breakthrough Beautiful Darkness (which I reviewed way back in April 2015) for Drawn & Quarterly. Satania concerns the search for a lost scientist who claimed "to be able to prove the existence of Hell by using Darwin's theory of evolution." A descent into the netherworld begins and our plucky crew of explorers find themselves profoundly changing as the journey continues, a very Vehlmannian conceit if there ever was one. If that doesn't do it for you, here's the cover: 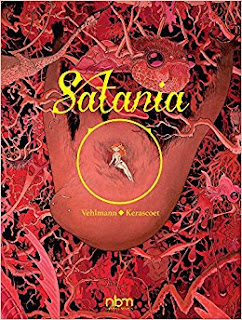 A quick plug for my friend Ryan K. Lindsay and his in-store appearance this coming Friday 6-8pm. Celebrating the launch of Beautiful Canvas from Black Mask and the self-published Ink Island with the also-appearing artist Craig Bruyn, the writer has whipped up an exclusive ashcan edition of Beautiful Canvas packed, in typically generous Lindsay fashion, with a tonne of process material. Get in, pick one up for signing and also feel free to pick the perpetual motion machine that is Ryan's brain. 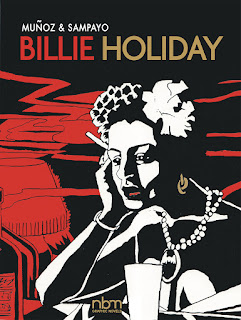 If you, like me, are jonesing for the long-delayed re-release of Munoz & Sampayo's classic Alack Sinner which *finally* arrive from IDW tomorrow (although I won't believe it until I'm reading it), good news! The creative pair's 1991 comics-bio of the extraordinary Billie Holiday has been given a new lease on life thanks to publishers NBM. Better news: it is absolutely terrific.

In Billie Holiday, the lauded Argentinian creators wisely stay away from straight biography, choosing instead to build the mythology of one of the world's great singers with anecdotes from the aforementioned Alack Sinner himself (slyly smuggled into the narrative) and a journalist tasked with quickly cranking out a feature on Lady Day on the 30th anniversary of her death in 1959. Holiday is also humanised through the use of flashbacks featuring the singer herself. As a result of its story structure, this is by no means a comprehensive biography, however, it is a better project for its creative liberties.

Holiday led an extraordinary life, worthy of a thousand Munoz/Sampayo pages. However, instead of a mere slip of a bio-comic, we are treated to a 200 page examination of the enduring power the singer has and just how she lives on through not just those she personally touched, embodied by Sinner who has a surprising connection to Lady Day, but those who even now stumble onto her work, embodied by our deadline-crunching journalist. The story cuts through time and place, frequently in certain scenes, and could easily be something of a train wreck as a result yet the finished product is not just playfully told, bold in structure and visually striking but somehow becomes a cohesive and loving tribute. It's tied together by a cracking introduction by Frances Marmande which provides all the extra biographical nuggets, for those thirsty for them, that the comic omits in favour of artfulness.

And Billie Holiday is artful, no doubt about it. Munoz's work is nothing less than striking at all times and jaw dropping at its peak moments. Stark in its heavy black and crisp white, with frequent moments of abstraction, Munoz's Lady Day is a powerful figure, recognisable always even though Munoz abstains from the slavish photo-realistic recreation that lesser artists would surely have employed for such a project. There is movement in Munoz's lines, depth to his heavy blacks and visible, crushing weight to the tragedy of so many poor, talented people in this story. Together with Sampayo, Munoz works real, true comics magic in this book. Witness this little two-panel sequence, in which Billie Holiday encounters her estranged "intimate friend," the astonishingly talented saxophonist Lester "Prez" Young, for the first time in years as they play "Fine and Mellow" together for a television show: 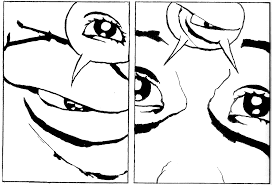 Young went on to essentially drink himself to death, adding extra sorrow to this brief moment of reconnection between these two dear friends. (For more on the Holiday/Young relationship click here)

A digression: in a moment of real strangeness, I was listening to Holiday's Strange Fruit LP while reading the book. "Fine and Mellow" started playing at the exact moment that this scene plays out in the book, matching right up to the point where Holiday, in panel three, sings, "...he's so fine and mellow." It was uncanny. The opening of the book has a powerfully backlit Holiday saying: "My voice no longer requires my body" as dark clouds part behind her, but for that bizarre moment, she was very much embodied for me. 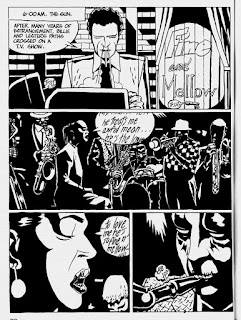 Sampayo, for his part, paints no superficial, fawningly glossy portrait of the jazz icon. The darkness throughout Holiday's life - child prostitution, drug addiction, alcoholism - is laid bare across numerous brutal, tragic pages. There is no exploitation of the subject, however, only an amplification of the horror Holiday endured, so much of which lent her voice such raw, sad authenticity. Her refusal to back down in or cower to white, male authority figures who arrested her (multiple times) and her boldness in the face of those other white men in suits who got rich off her rare talent is not only admirable, but demonstrated frequently throughout. The rarity of Lady Day's strength of character is made explicitly clear in a sequence where our journalist, caught up in his newfound admiration for Holiday and her authenticity, is on the phone to a lover who, with her "fake books" and "...fake tits..." and need for "instant gratification" is the shallow, brainless opposite of everything Holiday was, even if the singer eventually succumbed to her demons.

Closing out with the incredible "Jazz Sessions," a section dedicated to Munoz's process for the book and his related jazz imagery, Billie Holiday is a beautiful example of comics as biography, a truthful book unafraid to get fictional for the sake of its story and yet still manage to spotlight the real power of its subject. Its blending of truth and untruth lend it a strange, surreal beauty but it gets very, very real exactly when it needs to. The struggle is here. The racism is here. The strength and beauty of the woman herself is here. You want a strong female protagonist? Look no further than this book. 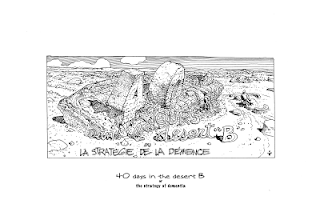 WEBCOMIC OF THE WEEK : 40 DAYS DANS LE DESERT B
By Moebius

As a mystic meditates in the desert, strange creatures, images and structures both mystical and archetypal appear in bewildering succession before him, driving him, eventually to his end. Subtitled "The Strategy of Dementia," 40 Days In The Desert B should be read both incredibly slowly and then incredibly quickly, or vice versa. Clicking through these images at speed will give you a near animated-effect and a slow, careful reading will allow you to soak up all the insane detail Moebius has given to these wordless pages. Exactly the kind of thing that should, but probably won't, end up in Dark Horse's Moebius Library effort, 40 Days Dans Le Desert B is an astonishing effort from the master of blowing minds.

COMICS VIDEO OF THE WEEK : A ARTE DE MUNOZ & SAMPAYO

Yes, it's back to Munoz and Sampayo's Billie Holiday project to close out this week. Set to the strains of Lady Day herself, here's a generous sampling of Munoz's work from the book.