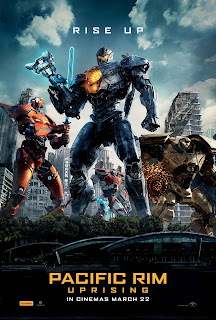 In March, John Boyega (Star Wars: The Force Awakens) leads the cast of PACIFIC RIM UPRISING, the follow-up to the 2013 cinematic epic of monsters and machines, inspiring a new generation to become the biggest heroes to ever walk the earth.

Thanks to enormous titans from Universal Pictures and PACIFIC RIM UPRISING
In Cinema March 22, we have 5 double in-season passes to the film to give away.

To go into the draw for your chance to win all you need to do is tell us,
"The only thing as big as the Jaegers and Kaiju in PACIFIC RIM UPRISING is my love and admiration for _______ ." filling the blank with the tag of the person who has a tall order of your emotions and you will be entered in the draw.

Terms and Conditions:
-Only entries made via the comments on the Facebook post will be included in the draw.
-All entries will go into the All Star Barrel and winners will be drawn at random.
-Entries close 5pm Sunday the 18th of March and winners will be announced Monday the 20th and notified soon after as to how to collect their tickets.

A huge thanks again to Universal Pictures and PACIFIC RIM UPRISING

In Cinema March 22
For more info head to: http://www.pacificrimuprising.com.au/
#PacificRimUprising #JoinTheUprising
© 2018 Universal Studios
Posted by All Star Comics Team at 10:29 AM