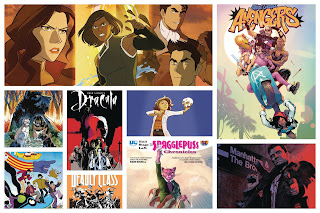 You didn't really think he'd get to keep the War Machine armour forever, did you? Frank Castle is back with the iconic skull-print shirt in PUNISHER #1 but he's back with a hunger to take down bigger threats, ones he wouldn't have dreamed of before the armour. Will he bite of more than he can chew? Or will Frank keep defying those odds...Marvel man of the moment, Matthew Rosenberg knows!

After being rendered inactive for nearly two-and-a-half decades, here comes the return of the western branch of the Avengers with WEST COAST AVENGERS #1, from Kelly Thompson and Stefan Caselli. The Hawkeyes, a fellow named Fuse, America Chavez, Gwenpool and Kid Omega unite, trying to live up to the East Coast and avoiding becoming another Great Lakes. Don't miss out, be sure to pick up a copy!

The long ears return with acclaimed Batman artist Kelley Jones in BATMAN KINGS OF FEAR #1 (OF 6)! With his era-defining style, you'll feel like you're back in the 90's as the Scarecrow wages another war on Gotham.

The heroic dogs return in BEASTS OF BURDEN #1 (OF 4) WISE DOGS & ELDRITCH MEN. Collectively known as the Wise Dogs, they must investigate and put an end to the series of seemingly unrelated supernatural events that threaten their little slice of Pennsylavania.

Dan Kerr made the decision to abandoned his wife and unborn daughter, now his choice comes back to haunt him, literally, in COLD SPOTS #1 (OF 5)! The new, spine-tingling miniseries from Cullen Bunn will bring you all the scares you need, we recommend you don't read this one after dark... if you're brave enough to purchase it first.

Kirkman and co. pulled a fast one on us last month but this time we come prepared for DIE DIE DIE #2. The secret cabal within the US Government send the assassins elite on a new mission, will there be any more shock dismemberments? Our guess is yes.

More Kirkman with a tale about one of Marvel's unknown Golden Age heroes meeting his end in DESTROYER BY ROBERT KIRKMAN TP. Having reached his twilight years, Keene Marlow, the Destroyer, sets out to tie up (read:exterminate) all his loose ends, including his archnemesis, Scar.

Peter David's digital exclusive Avengers series comes to print for the first time with AVENGERS BACK TO BASICS MPGN TP. With a classic lineup of heroes, including Iron Man, Thor and the Incredible Hulk, the Avengers will find themselves caught up in all sorts of perilous situation, ranging from Ragnarok to a Captain Marvel from another world.

The streets of Gotham are watched over by the Caped Crusader during the nights but who protects the city during the day? Enter Duke Thomas, the Signal, the hero who stands between the good and evil of Gotham when Batman can't. Check out BATMAN AND THE SIGNAL TP, from Scott Snyder, for the complete miniseries, as well as some back-up stories involving Duke in his journey to become the hero he is now.

One of Mike Mignola's finest works of art is now available for you to enjoy in BRAM STOKERS DRACULA HC. One of his last works before his famous "Hellboy" mythology was introduced to the world, it has been reprinted for the first time in 25 years. Presented in black and white, perfect for the chilling atmosphere of Dracula!

It's 1950s America, the Soviets are the enemies abroad but the government is hunting for the enemies within as well. One of those enemies is Snagglepuss, a gay, subversive playwright, who must now try to ensure the success of his latest play whilst being under investigation by the House Un-American Activities Committee in EXIT STAGE LEFT THE SNAGGLEPUSS CHRONICLES TP. Will the play be a hit, or will Snagglepuss end up behind bars before the first act?

From dealing with the threat of Norman Osborn and HAMMER, to discovering an entire council of various Reed Richards, the excitement never lets up in FANTASTIC FOUR BY HICKMAN COMPLETE COLLECTION TP VOL 01. Sowing the seeds that would lead to the climactic "Secret Wars" event, this is a "Fantastic Four" run not to be missed.

Best friends Susan, Daisy and Esther have completed their second year of university but cracks in the friendship begin to appear in GIANT DAYS TP VOL 08. With loves, new and old, unlikely friendships and a terrible old house, will the trio's friendship make it to their third year?

Couple this "Giant Days" treat with another, the GIANT DAYS HC NOVEL tells an original story with our three uni girls. The three form an unlikely friendship, but when one of Daisy's extracurricular activities link to a swathe of disappearances, Susan and Esther will investigate!

The third and final part of "Turf Wars" arrives with LEGEND OF KORRA TP VOL 03 TURF WARS PT 3. Korra has set out into the Spirit Wilds to find Asami but the human/spirit hybrid, Tokuga, has unleashed dark forces upon the wilds. The two women must then team up to survive and conquer the darkness!

The original 1968 "Planet of the Apes" is a film classic but presented before you today is how that film was originally envisioned with PLANET OF APES VISIONARIES ROD SERLING ORIGINAL HC. The creator of "The Twilight Zone", Rod Serling imagined a busy metropolis, rather than the primitive cities of the film, where the apes wore the clothes we wore and drove flying cars! That vision was never to be realised... until now, with Dana Gould's adaptation of Serling's original script.

To celebrate the 50th anniversary of the iconic Beatles film, editor of MAD Magazine, Bill Morrison, presents BEATLES YELLOW SUBMARINE HC. The Fab Four are recruited by the captain of the eponymous submarine to save Sgt. Pepper's band and the whole of Pepperland from music-hating Blue Meanies. The ultimate Dad gift or a must have for any Beatles fan.

Marcus and Maria have returned, bringing a tidal wave of bloodshed along with them in Rick Remender's DEADLY CLASS TP VOL 07 LOVE LIKE BLOOD. Shabnam and the student council set out to put the deadly duo down for good, whilst the headmaster awaits for the one student to make it out alive.

For Philo Harris, love sucks and he's out for revenge against it in DEATH OF LOVE TP. With a trusty, probably rusty, chainsaw at his side, Philo will face down an army of Cupidae and gods. Only one thing is certain, love has never been messier!

The titular Fang is a hitwoman, tasked to take out all variety of supernatural beings. But in FANG GN VOL 01, she finds she's second-guessing herself after a night out with a most charming date. Now the Fang is taking control of her second date and getting out while she's ahead.

When the rickety, old, school playground is closed off, new girl Laura will team up with four of her fellow, geeky students to do the unimaginable: build a new playground. GEEKY FAB FIVE GN VOL 01 ITS NOT ROCKET SCIENCE features their hard work and determination, as well as the five girls sticking together in the wake of schoolyard meanies.

The world of Lumberjanes is colourful and exciting, and now the LUMBERJANES COLORING BOOK TP allows you to get in on the excitement! Featuring 96 pages of black-and-white artwork from the comics, have fun colouring it to either match how it really looks, or put your own trademark colour scheme on it!

Critically-acclaimed creator Jeff Smith delves into science fiction, noir and conspiracy with RASL COLOR ED TP VOL 01 (OF 3) DRIFT. After black and white serial releases in different comics, Rasl's journey of intrigue after finding the lost journals of Nikola Tesla are presented in colour and unabridged.

Suzie and Jon can freeze time when they make love, and they chose to break the law in SEX CRIMINALS TP VOL 05 FIVE-FINGERED DISCOUNT, from Matt Fraction and Chip Zdarsky. But now they're in the aftermath of their break-up, which means... time for the rebound!

Within our complex genetic code, there is useful DNA, and junk DNA. The junk DNA was considered exactly that: junk but in STAIRWAY OGN VOL 01, it's purpose may now be known. Will the researchers discover a stairway for humanity's evolution or will they unleash a doom upon the species unlike any that has come before?

Get up with the latest in fashionable pinwear with the SHE-RA GLITTER FACE ENAMEL PIN. With the glitter detailing, you won't get lost in a crowd.

Everybody will know that more than meets the eye with you when you pick up the TRANSFORMERS OPTIMUS PRIME GLITTER FACE PIN.

A new range of figures arrive with X-MEN LEGENDS 6IN AF, all part of the Apocalypse series! With each figure coming with a bonus piece for the build-a-figire Apocalypse, you won't want to miss a single one.

Comics and some cool merch, it's a little sugar and spice for you! Anything extra you need just be sure to let us know before Tuesday night for us to get it sorted.
Until we see you next have an awesome week, live life and read comics.