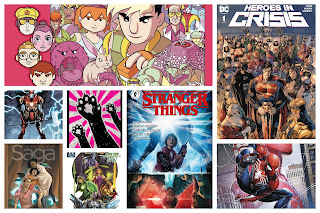 September, you've been great but it's almost time to say good bye. A massive week of books, sporting finals and store events. We've got the next Women's Club Meet Up on Sunday afternoon and a little something special lined up for you for later in the week, so be sure to check back in for more on that. Until then though, check this!

After months of hype, Tom King and Clay Mann's new story of crisis arrives with HEROES IN CRISIS #1 (OF 7). This new limited series tackles the important issue of PTSD and how the heroes of the DC Universe handle it, in the halls of the Sanctuary. When something goes wrong and many patients wind up deceased, everyone is out to catch the two suspected of committing such a heinous act: Harley Quinn and Booster Gold. You don't want to miss this modern classic in the making.

The worlds of animation collide when "Star Trek: The Animated Series" and the 80s "Transformers" series crossover in STAR TREK VS TRANSFORMERS #1 (OF 4). Veteran Transformers comic writer, John Barber, teams up with writer Mike Johnson, of Star Trek comics fame, to deliver a battle between the Autobots, along with the Enterprise crew, against the Cybertronians, all presented in artist Philip Murphy's rendition of the animated classics.

Brilliant "Immortal Hulk" writer Al Ewing and all-star Spidey artist Humberto Ramos combine like Thor and Iron Man to present INFINITY WARS IRON HAMMER #1 (OF 2). When Stark Odinson is captured by Frost Giants to forge them an armory, Odinson instead turns their forges against them to form a suit of armor. Now he is the armored Asgardian... the Iron Hammer!

The star of the video game sensation of 2018, "Spider-Man", breaks into the larger Marvel Universe with SPIDERGEDDON #0. Be sure to complete the game before you pick this one up to minimise the spoilers, then sit back and watch as Christos Gage and Clayton Crain weave the latest Spider-Man into the web of the Spider-Verse.

After nearly three months of delays, JUSTICE LEAGUE ODYSSEY #1 finally hits the store shelves. Spinning out of "No Justice", Odyssey combines the might of Cyborg, Starfire, Green Lantern Jessica Cruz and Azrael, looking very much out of his comfort zone. But the true wildcard is Darkseid, whom the team encounters whilst travelling in their Brainiac Skull Ship. Is he really there to be, dare we say, a hero? Or maybe the better question is: were the delays worth it? The only way to find out is to secure yourself a copy.

Equal parts Pokemon and Power Rangers, check out GAMMA #1 (OF 4) for some kaiju monster collecting and battling. In a world of cute, but deadly, monsters, one monster trainer will find his dreams of glory and arrogance clash with his hubris as the world collapses around him. Fingers crossed he can put it behind him and become the hero he needs to be.

The Netflix sensation looks to repeat its success on the comic page with STRANGER THINGS #1, from Jody Houser and Stefano Martino. Witness Will Byers' journey into a dimension of decay and destruction, and his escape from the clutches of the Demogorgon and the Upside Down. The anticipation for this book is immense, be sure to have your copy ordered because it's not gonna last long on the shelves.

In the wake of the "Vision" miniseries cancellation, Eisner-nominated and New York Times best-selling writer Chelsea Cain hits back with MAN-EATERS #1. A mutation in the Toxoplasmosis disease is causing menstruating women to become killer wildcats! As the affliction spreads and the situation becomes dire, the fate of the world rests upon the shoulders of a twelve year old girl. How can she save the world, and will she be able to accept the full responsibility such a task comes with?

If you missed out on the comic book sensation of the year, or you just couldn't choose which awesome cover you were after, then be sure to check out ACTION COMICS #1000 THE DELUXE EDITION HC. Along with the stories contained within the issue itself, this deluxe package also comes with all variant covers, both standard and store exclusives, as well as the Superman stories from Action Comics #1 & #2, where it all began. With other bonus content, don't miss out on this one.

Marvel legends Roger Stern and Kurt Busiek's epic Avengers limited series is finally back in print with AVENGERS FOREVER TP. Avengers from across all of time must team up and work together to fight Kang the Conquerer and his foe, the Master of Time: Immortus! Never had an Avengers story been so huge, so epic, and now it's all here for you in one, convenient volume.

Get closer to the world of the "Dark Crystal" with the interactive JIM HENSON DARK CRYSTAL DISCOVERY ADVENTURE HC. Wonderfully illustrated by Ann Marcellino, each page features treasures for the reader to locate and advance the story, whilst also keeping an extra eye open to catch all the fun easter eggs peppered around the treasures. A fun book which would be enjoyed by anyone of any age.

DC's "New Age of Heroes" line makes another trade paperback debut this week with SILENCER TP VOL 01 CODE OF SILENCE, from John Romita Jr. and Dan Abnett. The meta-human covert agent known as the Silencer was the Leviathan's top assassin. With her invincibility waning, she managed to make it out of her life of danger and settle down... until her former boss, Talia al Ghul tries to drag her into taking one more mission, and she's not taking no for an answer.

Speaking of Talia al Ghul, she's back again in SUPER SONS TP VOL 03 PARENT TRAP, once again trying to reclaim her son, Damian AKA Robin. But with his dark past reveal, can the world's most superb friendship survive, especially upon the revelation of Talia's next target? If that isn't enough to get you excited, this volume also features a team up between the super pets: Krypto and Titus!

The heroes of in a half-shell have teamed up with the rabbit ronin in several adventures, and here they all are for your convenience in USAGI YOJIMBO TMNT TP COMPLETE COLLECTION. Written and illustrated by Usagi's creator himself, Stan Sakai, it also includes bonus behind-the-scenes material from his studio, as well as an introduction from one of the Turtle's co-creators, Peter Laird.

Hey there, everyone, your pal Deadpool here! Ever wanted to experience an exciting day in my life? Then grab this copy of YOU ARE DEADPOOL TP, from the unsung hero we know as Al Ewing! Traverse the wild history of the Marvel Universe in the safety of my regenerating form and interact with your favourite heroes and villains. Fun for all the family (except the kids). There, now that's how you do a preview. Be sure to read it in that lovable hunka hunka, Ryan Reynolds voice.

Explore a dimension unlike any other in FEARSCAPE #1, from Ryan O'Sullivan and Andrea Mutti. The Fearscape is built upon our greatest fears come to life, and it is up to the Muse to select the great Storyteller, the greatest writer from our dimension, to combat them. But when the Muse accidentally selects Henry Henry, a mere plagiarist, the fear may finally win at last.

Leo was forbidden from playing with toys as a child, now he's fully grown, he's setting out to play with everyone else's. He would have accepted his misfortune and grown up, but his new friend, Jerry, hadn't decided to push Leo's basest instincts in FRIENDO #1. Except Jerry isn't human... he's marketing VR, and he's malfuntioning.

We're always told things will be better in the afterlife, prepare to be proven dead wrong in HIGH HEAVEN #1. Tom Peyer delivers biting satire as malcontent David Weathers dies and finds himself in Heaven... where everything is terrible! Along with another back-up story from Peyer and a prose story from comics resident madman, Grant Morrison, don't forget to pick this one up.

More on the Morrison front. Has it really been 10 years already? Grant Morrison's epic DC event comes to top-shelf, omnibus format with FINAL CRISIS 10TH ANNIVERSARY OMNIBUS HC. Collecting issue and tie-in book, get the entirety of the largest battle between good and evil since the original battle between New Genesis and Apokolips in "New Gods" creator Jack Kirby's own work.

Another healthy dose of Grant Morrisony goodness awaits in KLAUS HC NEW ADVENTURES OF SANTA CLAUS, with art from the Eisner-nominated Dan Mora. Their reinvention of Santa Claus arrives in the 21st century as he saves Christmas by fighting foes and threats from across different  dimensions.

From Jose Diaz Canales, famed co-creator of "Blacksad", comes FRATERNITY HC, with artwork from the talented Jose-Luis Munuera. Set during the American Civil War, a small frontier town discovers a terrifying monster prowling in their foresty surrounds, one that may have a connection to a feral child found years previously. A book that is perfect for fans of Canales' previous work and those who love the classic Universal monster movies.

Currently being developed for the big screen, Pornsak Pichetshote's debut comic book series is collected within the pages of INFIDEL TP. The haunted house genre gets a 21st century makeover as an American Muslim woman and her multiracial neighbours move in to a building, haunted by spirits that feed off the misguided xenophobia of humanity.

The third, final and most introspective volume in the "Inside Moebius" series lands with MOEBIUS LIBRARY INSIDE MOEBIUS HC VOL 03. Not only does Jean "Moebius" Giraud interact with his creations, he also encounters various versions of himself from decades past, stopping to chat and argue about art and creativity. A treat for the legions of Moebius fans, and for fans of the purely surreal.

Alien visitors continue to pour into the Port of Earth to import and export, but amongst that, an old alien threat emerges in PORT OF EARTH TP VOL 02. It's up to Earth Security Agents Rice & McIntyre, traumatised by recent events themselves, to keep the peace between humans and aliens and stop the oncoming threat.

Finally, at long last, the latest volume in Brian K. Vaughan and Fiona Staples' long running saga arrives with SAGA TP VOL 09. It's the most shocking, most impactful chapter of "Saga" yet, with an action-packed adventure involving terror and fake news! Take your time with this one, folks, it's gonna be a whole year till the next story arc starts.

BAH! What a week! And that's all before we get to the surprise we've got for everyone later this week! Definitely not a week to miss out, if you spot something else you need, make sure to let us know before Tuesday night for us to get it sorted for you.
Until we see you next then, have a great week, live life and read comics!

YOU ARE DEADPOOL TP

Posted by All Star Comics Team at 8:01 PM