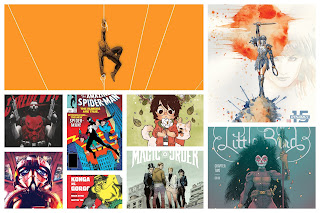 Creeping closer to the first Saturday in May, Free Comic Book Day is just around the corner but before then you'll need some Easter reading to get you through next weekend. Let us help you out.

With the final winner of our international challenge with Chicago's own Challengers Comics still to be decided, the real winners are everyone who checked out the exciting first issue of Little Bird.
Now, you can continue the journey set up by Darcy Van Poelgeest and Ian Bertram in LITTLE BIRD #2 (OF 5), as Little Bird, in a dreamscape, is reunited with her mother and the mysteries of her family lineage are revealed to her.

With Buffy the Vampire Slayer making a triumphant return to pop culture with a new series from Boom, it wasn't going to be long until a certain vampire reared his head as well. Now, the fan-favourite bloodsucker, Angel, returns to comics with the super secret and surprise ANGEL #0, from Bryan Hill and Gleb Melnikov, continuing to protect the world to redeem himself for his monstrous beginnings.

When a world embroiled in turmoil cried out for a hero, Xena the Warrior Princess stood up for her people. Now, she's back for more action and bloodshed in her new ongoing series, starting with XENA WARRIOR PRINCESS #1, from Vita Ayala and Olympia Sweetman. In the first of many new adventures, Xena and her companion Gabrielle must learn the secrets behind a village of children exhibiting super strength.

Did everyone enjoy Symbiote Spider-Man #1? Great... wait? You already want more black suit Spidey? Gee, I guess the best we can do for you all is the AMAZING SPIDER-MAN #252 FACSIMILE EDITION, from Roger Stern, Tom DeFalco and Ron Frenz! It's a recreation of the original comic debut of the symbiote suit for Spider-Man on Earth and is perfect way to fill the void left until the second issue of Symbiote Spider-Man hits the stands.

Following the events of issue number 3, Matt Murdock sure has his work cut out for him in Chip Zdarsky and Marco Checchetto's DAREDEVIL #4. If being wanted for crimes he didn't commit wasn't hard enough, as well as being chased by a detective with zero time for vigilantes, now the Punisher is back in Hell's Kitchen, and Daredevil will need to stop him from bringing too much pain along with him.

If Daredevil doesn't satiate your appetite for Mr. Zdarsky this week, then you should also grab a copy of SPIDER-MAN LIFE STORY #2 (OF 6), especially after that epic first issue with art from Mark Bagley. It's now the groovy 70s, and Peter and Gwen are trying to find happiness, despite the Green Goblin being after their lives. But while the Goblin is after them, Norman Obsorn is not. The web of intrigue continues to weave it's storytelling magic.

The war between the Galactic Empire and the Rebel Alliance continues to wreak destruction on the galaxy, and it's the innocent civilians of the Empire that are suffering. But now a new squadron, Shadow Wing, has been formed to take out the threat of the Rebellion in STAR WARS TIE FIGHTER #1 (OF 5), from Jody Houser and Roge Antonia.

The excitement continues in Jason Aaron and Russell Dauterman's WAR OF REALMS #2 (OF 6) WR, which sees Malekith and his legion continue to devastate the Earth. Thor is the only one who can stop them, but he's trapped in the Land of the Frost Giants. With the rest of Earth's Mightiest Heroes duking it out in New York and beyond, a hero will fall, as befitting all of Marvel's big events.

Monsters stalk the streets of New York City, but a monster of the city's own making is ready to send them to meet their maker in WAR OF REALMS PUNISHER #1 (OF 3) WR, from Gerry Duggan and Marcelo Ferreira. Frank Castle has been stepping up his game in taking out the most deadly of criminal forces, and now he has a real challenge before him as Malekith's minions face off against the Punisher.

Like all of Marvel's big comic book events, there's almost a library's worth of tie-ins to accompany the main series, but if you're looking for that one little extra book to expand the event, then you can't go wrong with WAR OF REALMS WAR SCROLLS #1 (OF 3) WR, from the writer of the event, Jason Aaron, with art from Andrea Sorrentino. Gifted with Heimdall's sight of the Bifrost, the blind Daredevil will see more than he could ever imagine, and he'll need it to be not just Hell Kitchen's guardian devil, but one for the Earth. Maybe most important it gives us our third Zdarksy hit in the same week with an all new Howard the Duck story with Joe Quinones art!

Before Spider-Man, Doctor Strange, Blue Beetle, the Question and many more epic heroes, Steve Ditko was a master of the art of drawing monsters, and some of his best works featuring Gorgo and Konga are collected in DITKO MONSTERS, with words by Joe Gill. They're not fighting each other, but as they face down commies and other foes, they will fight for your love in this horror-ific book.

A challenge for both the creation and the creatives, the KAMANDI CHALLENGE TP collects the limited series, with a new creative team tackling each issue, and in paperback for the first time. All-star writers and artists featured include: Gail Simone, Tom King, Peter J. Tomasi, Paul Levitz, Neal Adams, Amanda Conner, Dan Jurgens, Walt Simonson and many more have the last boy on earth really put through his paces.

Worlds collide in Peter David and Rick Leonardi's SPIDER-MAN 2099 VS VENOM 2099 TP, which brings us more of Miguel O'Hara's, the Spider-Man of 2099, crazy adventures. First off, he undergoes time-travelling, body-swap with his inspiration, the original Spider-Man: Peter Parker. Then, if that wasn't enough for one spider, he'll have to find his way out of the intricate web of traps set by Dr. Doom of 2099, before clashing with the Venom of 2099, who possesses a secret connection with Miguel himself. If the present is too dull for you, then you need more 2099 in your life.

For nearly two hundred years, it has been debated how the author supreme, Mary Shelley, was able to so scarily and vividly bring a creature like Frankenstein's monster to life with her words. That answer is finally coming to light in Adam Glass, Olivia Cuartero-Briggs and Hayden Sherman's MARY SHELLEY MONSTER HUNTER #1. In this series, learn about how Shelley didn't just create the events of Frankenstein, she lived them!

Back in the 1980's, jocks ruled the school yard, and anything outside of sports was a source of ridicule. So when three jocks are accidentally frozen in a cryogenic experiment gone wrong in Paul Constant and Alan Robinson's PLANET OF THE NERDS #1, they awake in a future year ruled by nerds and their culture: 2019.

Jeff Lemire and Andrea Sorrentino's sleeper hit of 2018 returns for another story arc, collected within GIDEON FALLS TP VOL 02 ORIGINAL SINS. As the man called Norton continues his hunt for the elusive Black Barn, whilst the out-of-his-depth Catholic priest, Father Fred, reveals the secret behind a series of grisly murders.

While ordinary folk live their lives never witnessing anything strange or unusual, they would never suspect that the unusual is hiding under their very noses. That's thanks to the five magical families that compose the eponymous Magic Order in Mark Millar and Olivier Coipel's MAGIC ORDER TP VOL 01. But now someone is taking out members of the order, one by one. Will there be enough of the order left to defend the Earth?

From Mai K. Nguyen comes a touching story of friendship between Willow, a lover of forests, and Pilu, a tree spirit that lives in a magnolia grove Willow's mother used to take her to in PILU OF THE WOODS GN. When Pilu gets lost and can't find her way back home, Willow sets out to reunite the tree spirit with their home and forcing Willow to face her turbulent past.

In the world of Karmome Shirahama's WITCH HAT ATELIER GN VOL 01, magic is a natural part of life, but can only be accessed by those born with the gift, as everyone knows. Coco is a young girl determined to be a witch, but was born without the gift, however, that doesn't mean she'll let that stop her. A chance encounter with a magician reveals that maybe there is a way for Coco to achieve her dream, and what everybody thought they knew about magic was wrong.

From one of the best artists around comes one of the best looking Hal Jordan Green Lantern statues around with Ivan Reis' DC DESIGNER SERIES GREEN LANTERN BY IVAN REIS STAT. Featuring Hal in a kick-ass pose, ready to bring the will-fueled smackdown on the unfortunate foe that got in his way, you don't want to miss out on owning this one.

As you can see plenty to keep you busy this holiday weekend when you aren't eating chocolate.
If there is something here you are after, just let us know before close on Tuesday and we'll get you sorted.
Until we see you next, have a great week, live life and read comics!

Posted by All Star Comics Team at 9:58 AM