New Comics For Wednesday 22nd of May 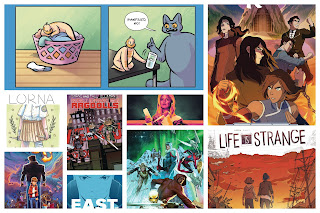 After the craziness of the weekend just gone, let's focus on a small win that is this week's shipment.
Just look at some of these latest comic treasures right here!

Back when just about every superhero was an American, John Byrne struck out from the rest by giving Canada its own superteam called... Alpha Flight! Featuring the heroes Vindicator, Northstar, Aurora, Sasquatch, Snowbird and Shaman, you'll get to know them in their first appearance with the ALPHA FLIGHT #1 FACSIMILE EDITION, through the eyes of new recruits, Marrina and Puck. The team may have officially been shut down with Department H, but that's only the beginning for this team, and now you can experience their very first adventure exactly how it originally appeared.

A looming presence in the Original Trilogy, the gangster Jabba the Hutt virtually ruled the Outer Rim from his palace in Tatooine. But what is it that makes Jabba such a force to be reckoned with? You'll be able to find out in Greg Pak and Emilio Laiso's STAR WARS AOR JABBA THE HUTT #1, and then you might want to re-evaluate the Hutts.

Thor, the only being who can stop Malekith's War of the Realms, has been trapped in Jotunheim, the Land of the Frost Giants. To rescue him, Captain America has taken up the ax, Jarnbjorn, and formed a team to accompany him in Melbourne writer Tom Taylor and Jorge Molina's WAR OF REALMS STRIKEFORCE LAND OF GIANTS #1 WR. With Spider-Man, Wolverine, Luke Cage and Iron Fist with him, Cap can't fail. Or can he?

Dash Shaw takes you into his interpretation of the world featured in the popular board game, Clue (or Cluedo, as we call it), with CLUE CANDLESTICK #1. In this first issue, get to know the world that is one big, suspenseful murder mystery, where everyone is a suspect and anyone can be the victim. Can you figure out who is which from the secrets, puzzles and clues?

When breaking out of your prison, sometimes the breakout isn't so hard, it's where to go once you've escaped that's the real battle. That's what Roman Mozorov starts to learn in Rich Douek and Alex Cormack's ROAD OF BONES #1, set in 1953, when imprisonment in a Siberian gulag was hell on Earth. But now that's he out, Roman and his fellow escapees realise that there's still hundreds of miles of frozen hell to trek through to reach freedom.

From the highly-acclaimed creative team behind Grass Kings, Matt Kindt and Tyler Jenkins, comes BLACK BADGE HC VOL 01. While every adult in espionage is easily suspected, there are some jobs that need that extra level of undercover work. Who better to perform those duties than children? The Black Badges are a top-secret branch of government spies, composed of boy scouts, but now their latest mission may be in jeopardy as their leader is split between their duty and finding a lost team member.

Your favourite, neighbourhood vampire slayer is back in the modern era with BUFFY THE VAMPIRE SLAYER TP VOL 01, from Jordie Bellaire and Dan Mora. Taking you right back to the beginning of Buffy's journey from everyday teenager to supernatural hunter, same characters but different direction, this is a great place for fans new and old to jump right in to the terror and melodrama.

Another new series from Brian Michael Bendis lands in trade paperback format with COVER TP VOL 01, featuring art from David Mack. The intelligence community is in need of new agents to perform espionage, and they've found their new recruits in the form of comic book creators. With conventions happening across the globe, what better cover is there for someone to travel America and around the world? Find out how a well known comic book creator handles the pressure of being both a creative mind and a superspy.

They've been a couple in comics since the 1960s, and after a few bumps in the long road, Ben Grimm and Alicia Masters are finally tying the knot in Dan Slott and Aaron Kuder's FANTASTIC FOUR TP VOL 02 MR AND MRS GRIMM. We know what you're worried about, and don't you fret, there's no Skrulls, no Mephistos, no Joe Quesadas to undo all the character development and reset the clock. So grab your copy and shed a tear of joy.

The acclaimed TV series is over, but the Legend of Korra continues in graphic novel format with LEGEND OF KORRA TP PART 01 RUINS OF EMPIRE, from Michael Dimartino and Michelle Wong. With the Turf Wars over, Korra finds herself roped into another adventure, where she must decide who she trusts, lest the Earth Kingdom falls in the wake of a mistake.

With the Fantastic Four and Avengers lost in the Onslaught, the Earth needs all the heroes it can get, so thank goodness the Silver Surfer returns in SILVER SURFER EPIC COLLECTION TP INNER DEMONS, featuring J. M. DeMatteis' debut writing the book with art from Ron Garney. But with his memories frayed, can he mourn his fallen comrades? A visit to Alicia Masters, the woman who taught him compassion, may be the fix he needs. Then he'll go on a quest to learn a world-changing secret about his home planet, Zenn-La. Could you possibly ask for anymore action than that?

Kraven the Hunter, Mysterio, Sandman, Electro, Vulture and their leader, Doctor Octopus; these were the six dastardly villains that came together to form... the Sinister Six! Spider-Man had bested each of these foes on their own, but how would he fair against them as a team? That's for you to find out in SPIDER-MAN TP SINISTER SIX, which collects their debut in the Stan Lee and Steve Ditko-made Amazing Spider-Man Annual #1, as well as their insidious return (sans Kraven, but plus a Hobgoblin) in later issues of Amazing Spider-Man, featuring work from David Michelinie and Erik Larsen.

Kevin Eastman returns to indie comics with the self-published, almost auto-biographical DRAWING BLOOD SPILLED INK #1 (OF 4), with art from the man himself and Troy Little. Drawing Blood stars a once-successful comic book artist, Shane "Books" Bookman, who's trying to find his way after his early success, Radically Rearranged Ronin Ragdolls, has taken off and left him behind. Sound at all familiar? Begin the journey with this first issue to find out if Bookman can reignite his creative spirit.

Speaking of all things radical and ragdollish, you can get a taste of what Shane "Books" Bookman was capable of with RADICALLY RONIN RAGDOLLS ONE SHOT, a one-shot based on his fictitious creation, brought to life Kevin Eastman and Troy Little. Riffing off of Eastman's own TMNT, learn all about the trio of crime-fighting mutant cats that launched the Ragdolls franchise found within "Drawing Blood".

He's nearly ready to take on the X-Men, but Jonathan Hickman still has unfinished business with his acclaimed creator-owned series, East of West, which reaches is penultimate volume with EAST OF WEST TP VOL 09, featuring art from Nick Dragotta. Will love prevail in the face of the end of the world?

The fan-favourite video game has become a fan-favourite comic book, thanks to LIFE IS STRANGE TP, from Emma Vieceli and Claudia Leonardi. Set a year after their home is destroyed, experience the emotional reunion between Max and Chloe, which no fan was expecting. As they reunite, they'll have to face some harsh realities and twist the timeline to make everything settle once more.

Creator Benji Nate present a story starring a young girl, who's an awkward cat-lover and enjoys pulling knives on those she doesn't like, in LORNA TP. That girl's name in Lorna, and she's going to enjoy activities all young girls love, like fashion, friendship and romance. If that sounds too sappy for you, she'll also take part in more unique activities, like murder; refined, cold-blooded, deliberate murder.

The world where cats rule the world and mankind are just pets to played with returns with Caitlin Major and Kelly Bastow's MANFRIED SAVES THE DAY GN. Things have been looking up for tomcat, Steve Catson, and his man pet, Manfried, but that doesn't create the drama or humourous antics comics are known for, so things are about to get tricky when the local man shelter is short on funds and about to close down. Can Steve and his purrfriend Henrietta save the shelter and their relationship? Will Manfried be able to help, or will he be too busy fighting the new man pet Steve's adopted, Garfield?

Kat Verhoeven delivers a queer, slice-of-life story of dating and eating with her latest graphic novel, MEAT & BONE GN. Anna is looking for a fresh start, but when she meets the new girl moving in downstairs from her, Marshall, she'll have relapses of the body image issues she thought she'd left behind. Meanwhile, her roommate, Gwen, is trying her hand at polyamory, while friend Jane starts practically living at the gym. It's an interesting and well-crafted look at how women define themselves.

The latest series from all-star creator, Skottie Young, comes to trade paperback with MIDDLEWEST TP BOOK 01, with art duties taken up by Jorge Corona. Following a terrific storm, a young boy named Abel, along with his accompanying fox, sets off on a journey across a land filled with hidden magic, to learn the secret of his family's history, and reconcile it.

For you Hellboy fans, not only do you have a movie to go see, but you have the chance to land yourself a sweet set of Hellboy pins, with the HELLBOY ENAMEL PIN SET. A set of four pins based on Mignola's artwork, of course featuring two Hellboy pins, you can't go past this one.

It's a nice little week, great books or the chance to catch up on your reading pile.
If you spot something else you'd like, just let us know both close Tuesday for us to get it sorted.


Until we see you next, look out for each other, have a great week, live life and read comics!

Posted by All Star Comics Team at 3:00 PM