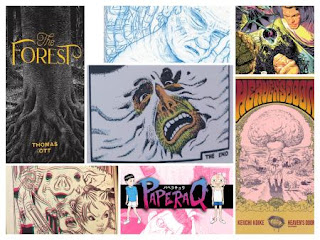 This was supposed to be ready to go two months ago but life, and COVID-19, cares not for our petty deadlines.

Which brings me to 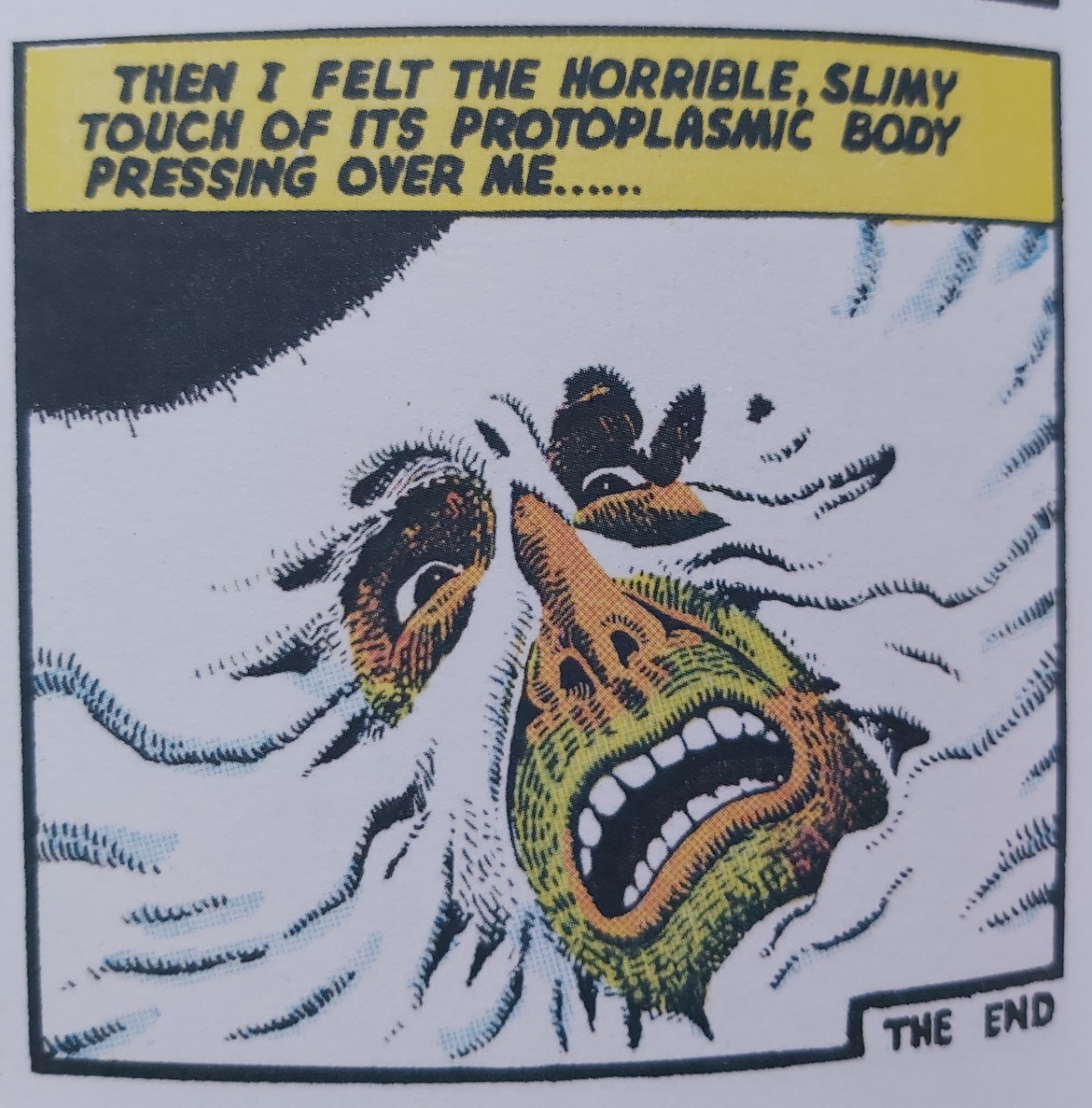 COVID sucks, I’m sure we can all agree. I don’t know if you visited the shop at any point during the last 3000 years of this pandemic, but everyone working in that lovely place deserves a round of applause and your comics-buying dollars in perpetuity for not just weathering the storm and ensuring we all got our comics but also for maintaining a great COVID-safe business plan whilst doing so. It must have been/still be scary for at least some of the crew - the commute, the customers (no offence), the general doom of it all - but, as always, they are nothing but the best.

So, keep yourself safe and keep keeping them safe. Because, as a human of…advancing years…COVID was not fun. It took me ages to recover from it and, not only that, but during the awful fatigue and the sadness of it all I did not even want to read comics.

Can you imagine? I would have rather lost my sense of taste and smell for a bit.

(that’s the final panel from Basil Wolverton’s The Eye of Doom circa 1950 btw).

Okay. The first column of the year is usually my Best Of for the preceding year.  Given that March is now here, I’m not sure how relevant that is to focus on too much, but….

ALL STAR RECOMMENDS BEST OF 2021 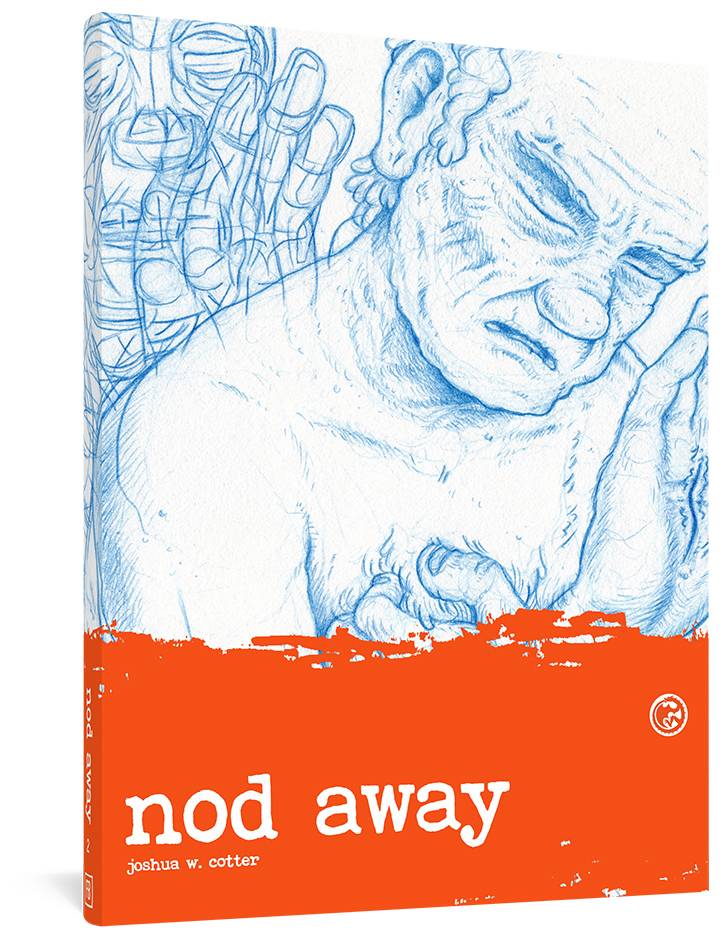 3.    The Thud by Mikael Ross (Fantagraphics)

You can throw in the wonderful Hershey (2000AD),

Red Flowers (D+Q), and The Grande Odalisque (Fantagraphics) as the most honourable of mentions. Cracking comics, all. 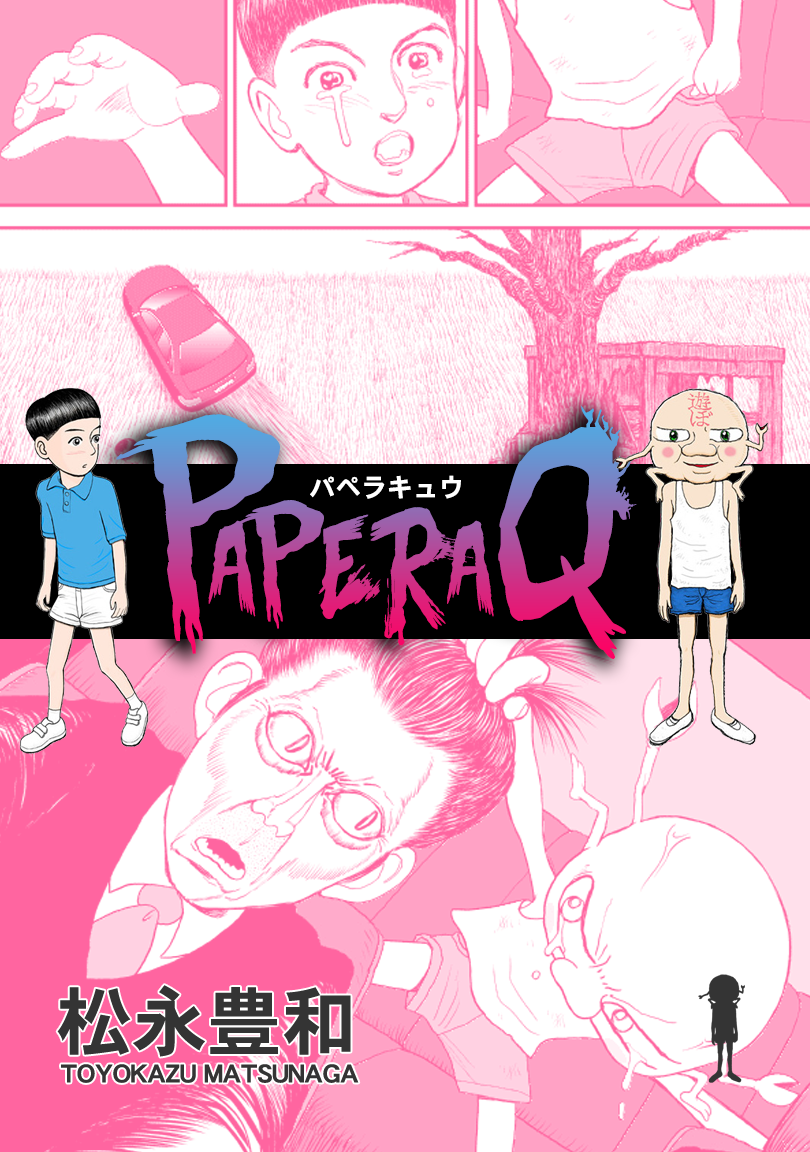 As this will never ever ever see print, I highly recommend going out of your way to read this particular comic digitally (ew, I know). Ten years in the making is PaperaQ by Toyokazu Matsunaga of Bakune Young infamy. All told, it is 3,000 pages of pay-what-you-want translated manga.

PaperaQ is easily one of the most unique and singular things you’ll find this year, or…possibly any year…guaranteed. The first part, roughly equivalent to a collected volume of manga from Viz or whoever, is completely free to read. Get through the first 20 or so WTF pages and you’ll likely be as hooked as I am. It’s astonishing.

You can also read more about it here.

Yes, sorry about that too. Normally, I trawl through advance solicitations and publisher PR and instagram hints and whatnot and smoosh together an approximation of (hopefully) interesting comics due over the course of the year.

This is a task that’s become harder and harder. I’m not exactly sure why but in recent years, I’ve ended up with a list that’s pretty top heavy with releases for the first quarter-to-half of the year.

Again, as it’s March (howww?!), I do not see too much value in it. I’ll try instead to stack up the Upcoming and Under The Radar section of this column in future with releases closer to current month to perhaps better suit our ever-shrinking attention spans/substance-addled memory issues.

I will say though, that it appears as though we will FINALLY be getting Chantal Montellier’s Social Fiction not in French from NYRC this year,(pictured above), there’s a new Nick Drnaso comic on the way called Acting Class, Ho Che Anderson is diligently wrapping up the second and final volume of his epic Godhead, an omnibus of the complete Alan Moore Miracleman run is coming, we may finally see the first volumes of Otomo: Complete Works and l and I never thought I would ever actually look forward to an Alex Ross comic in my adult life. 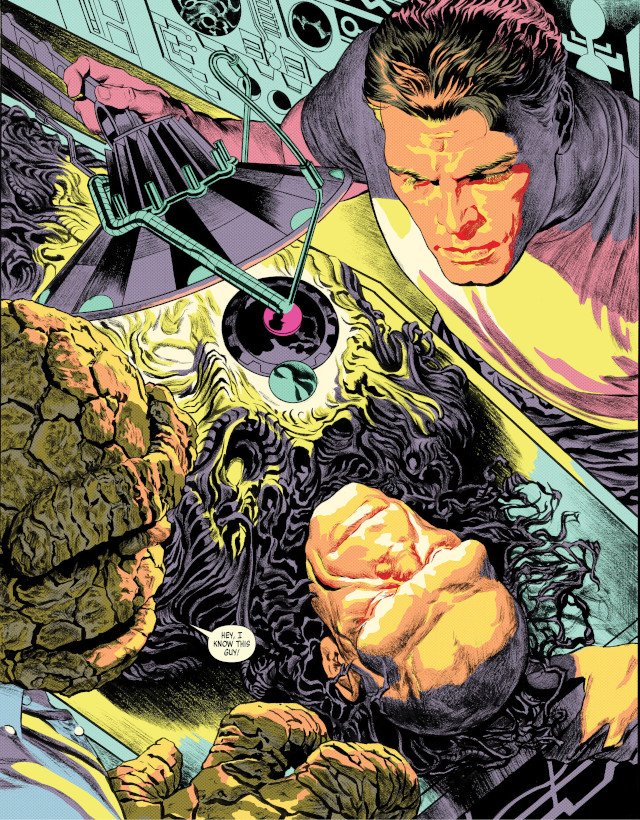 Truly, these are the End Times. 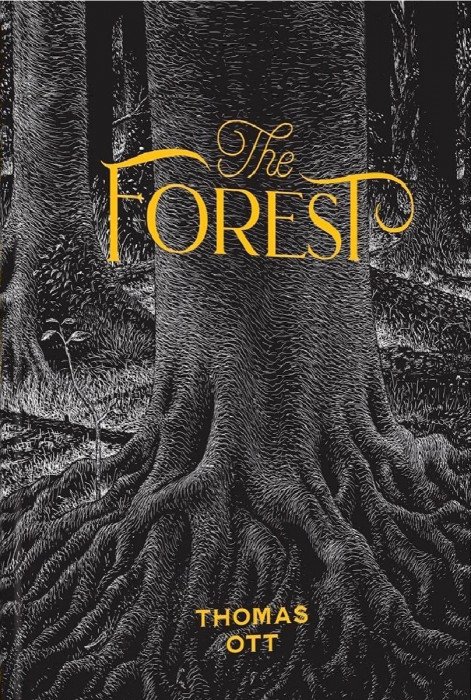 Surely, one of the most fascinating things about comics, as a form, is how that despite the best efforts of all creators involved, ultimately the speed at the end product is read is ultimately decided by the reader.

I will never forget, in my Japan days, watching boys on the train absolutely blow through phonebook-sized issues of Jump like they were flipbooks. Granted, much of that style of manga is built for speed - lean, cut back, spare on background, heavy on motion lines. My own inner craft-nerd might be why so much modern shonen hasn't clicked with me - I see corners cut and details skimped when, really, I should be viewing those comics as race cars.

All of this brings me to Thomas Ott’s remarkable The Forest, a silent comic of 25 splash pages which could literally be read in two minutes or lingered upon for hours. I myself took a great deal of time soaking the thing in. it’s not only so magnificently detail-rich and painstakingly crafted, but I also found myself staring at points in the background and discovering hidden or obscured shapes that once seen couldn’t be unseen. It’s perhaps the closest I’ve ever come to seeing a child’s imagination realised, objects in the dark turning ominous and metamorphosing into ‘scary things’ right before my eyes.

This is all very fitting considering The Forest’s main character is a small boy who has just experienced the death of a loved one and wanders away, sadly, from the funeral, to travel through darkness, both literal and metaphorical to find light again. My own son is currently afraid of the dark and no matter how many times I tell him that there is beauty in the darkness, that it’s a place for his mind to free itself to imagine and dream, a space where the problems that come in the light of day may resolves themselves, that it is warm and personal, he’ll ultimately have to resolve this fear on his own, make his own trek through this night-forest populated with all the things that he believes may lie in the dark and emerge out to the other side of morning. It’s up to him. 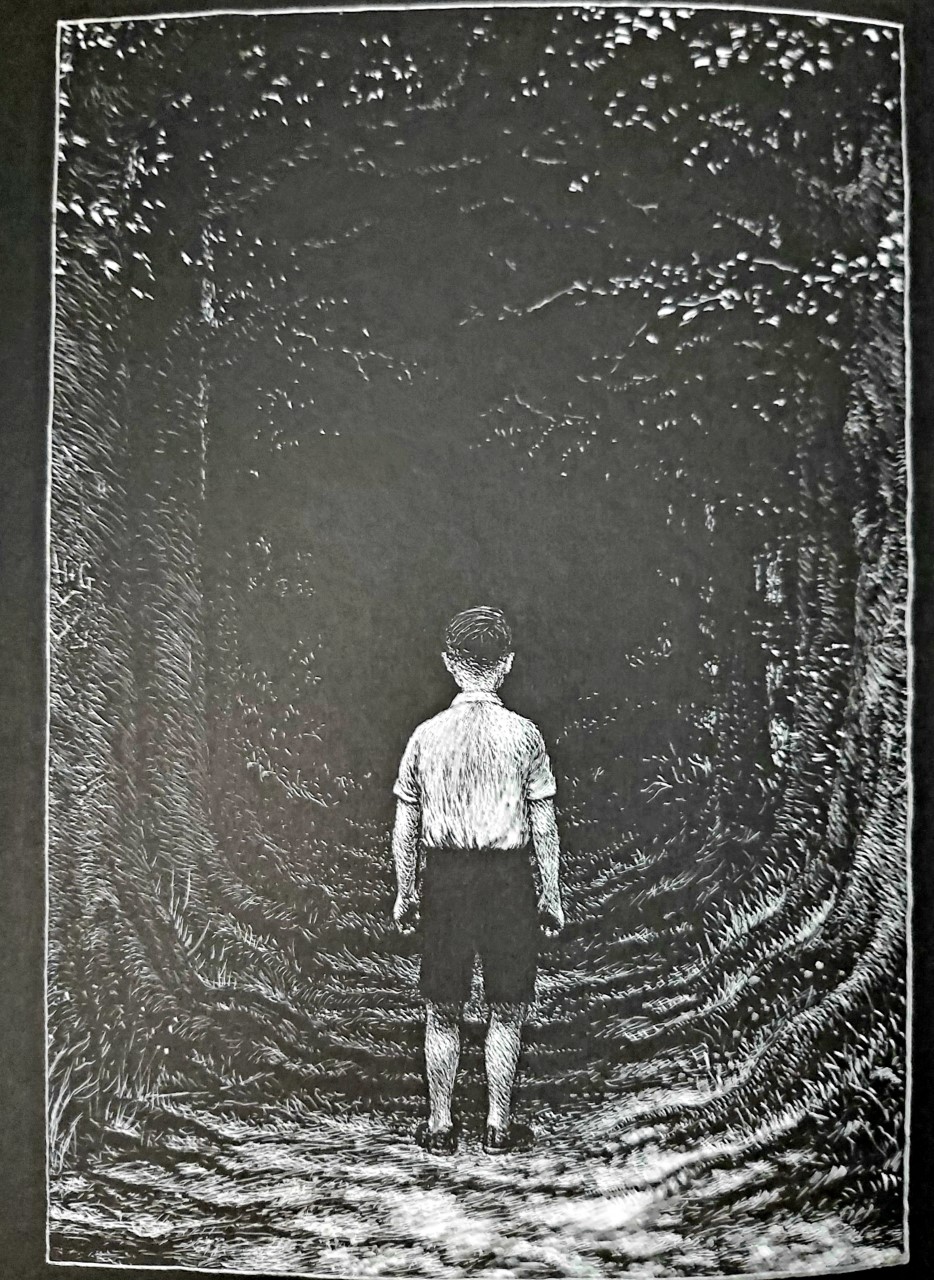 The plot of The Forest is as delicate as Ott’s artwork and, as result, I’m hesitant to say too much more about it. The Swiss artist (possibly most notable for his Cinema Panopticum, 2011 from Fantagraphics) works on black scratchboard, etching away at the surface with incredible care, to bring forth the white underneath. Every page is stunning in its own way, whether it’s the expression on the boy’s face, the alternating beauty and ominousness of the surrounding nature or the almost John Totelben-vibes of the folk horror nightmares living within the darkest parts of the forest (or the unconscious, if you dig Jung).

Death is omnipresent in this forest. seemingly with every twist and turn our boy makes, he’s upon another horror, another grim “version” of death: men swing from nooses, a pit of human bones is clambered over. Yet you might be surprised to hear that The Forest is, in my opinion, ultimately one of the warmest, most affecting and beautiful mediations on death and the process of grieving I’ve ever seen. Ott’s lovely, enveloping artwork is obviously a large reason as to why this is, but there’s a LOT going on here for such a slender book and I think perhaps its use of archetype during what’s, essentially, a rite of passage, strikes something at pretty primal within.

I dunno. That’s all rather highfalutin’ but there is real power between these covers. Not just that, but it’s a genuinely moving portrait of grief. Who hasn’t felt lost after a significant passing? To see that idea expressed so literally yet so expertly, beautifully and briefly is pretty incredible.

Pore over these pages. Get lost in Ott’s forest. We eventually all take this journey in some form or other whether we want to or not. The darkest journeys are often the most rewarding in many ways. Particularly journeys such as we find in The Forest, where the light at its end is oh so very bright.

WHAT MADNESS IS THIS: STRANGE THINGS FROM THE SHELF 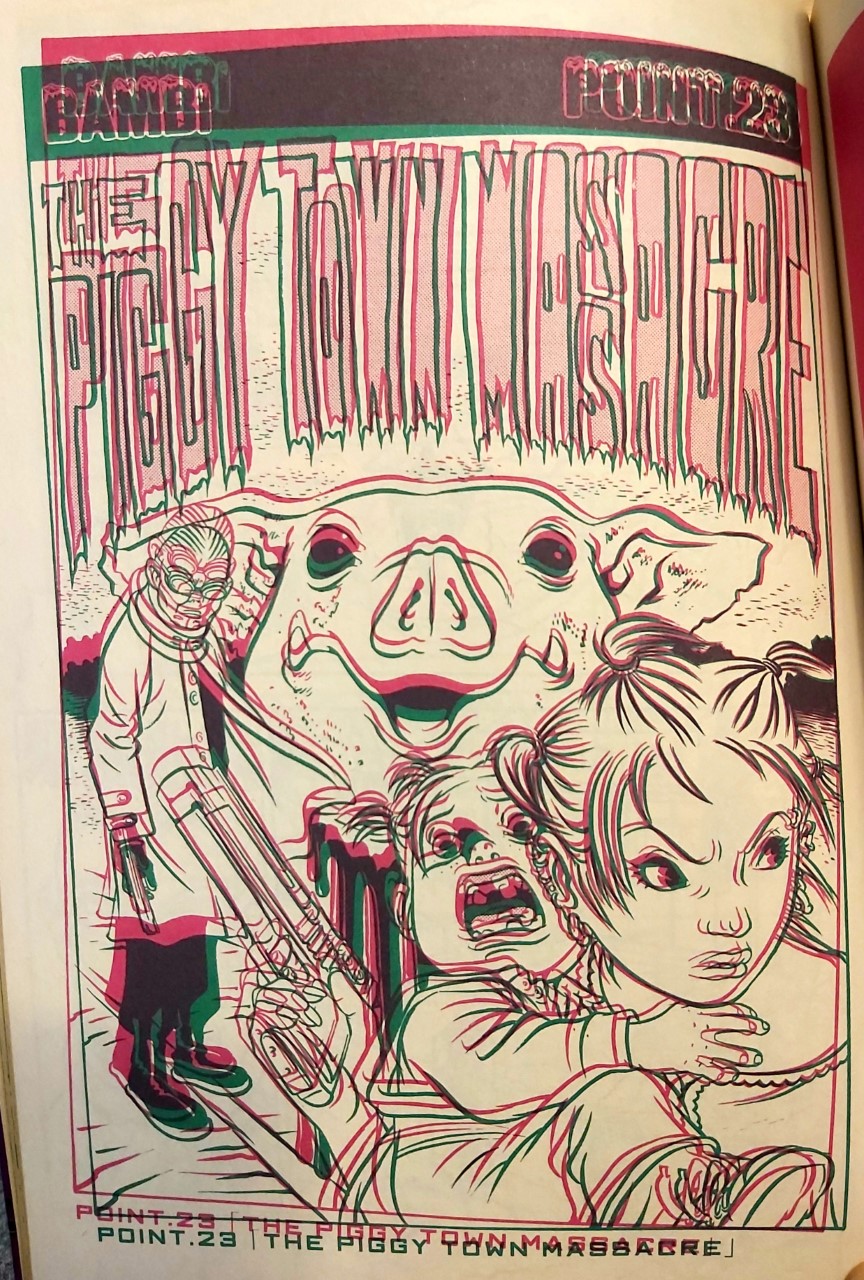 Atsushi Kaneko’s Bambi was originally serialised between 1998 and 2001. It came recommended to me in 2003 by at a Yeah Yeah Yeahs concert in Osaka by a guy named Vladimir. Wild times. It’s now 2022, I am old, the Yeah Yeah Yeahs haven’t made any music in a decade and we still can’t buy Atsushi Kaneko comics in English.

Anyway, do not adjust your screen or your eyeballs - Bambi often did this really cool thing where it would shift ink colours between chapters (one would be pink, the next green, the next purple, etc) and Kaneko would create these amazing chapter frontispieces using the colour of the previous chapter and the colour of the next. The results were these kind of wild, faux-3D effect splash pages utterly unlike anything else in comics.

In short, Bambi is a mysterious 16 year old girl armed with a pink gun and a kidnapped child named Pampi. Bambi has stolen Pampi from the Gabba King, a vampiric fat-Elvis rock star who sends scores of assassins out after her.

Kaneko playfully blows through genre after genre over successive arcs of this six-volume action romp. here we see the intro to “The Piggy Town Massacre,” where Bambi battles a clearly Leatherface-inspired, chainsaw wielding maniac.

Bambi Remodeled was released in 2014, stripping away the coloured inks and presenting the story in pure black and white. While definitely a better showcase for Kaneko’s amazing artwork, this version lacks a lot of the fun and visual punch of the original books (brown chapters aside).

If you’re curious and want more Atsushi Kaneko in your life (who doesn’t?) here’s a link to a terrific little documentary on the artist and his work.

UPCOMING AND UNDER THE RADAR 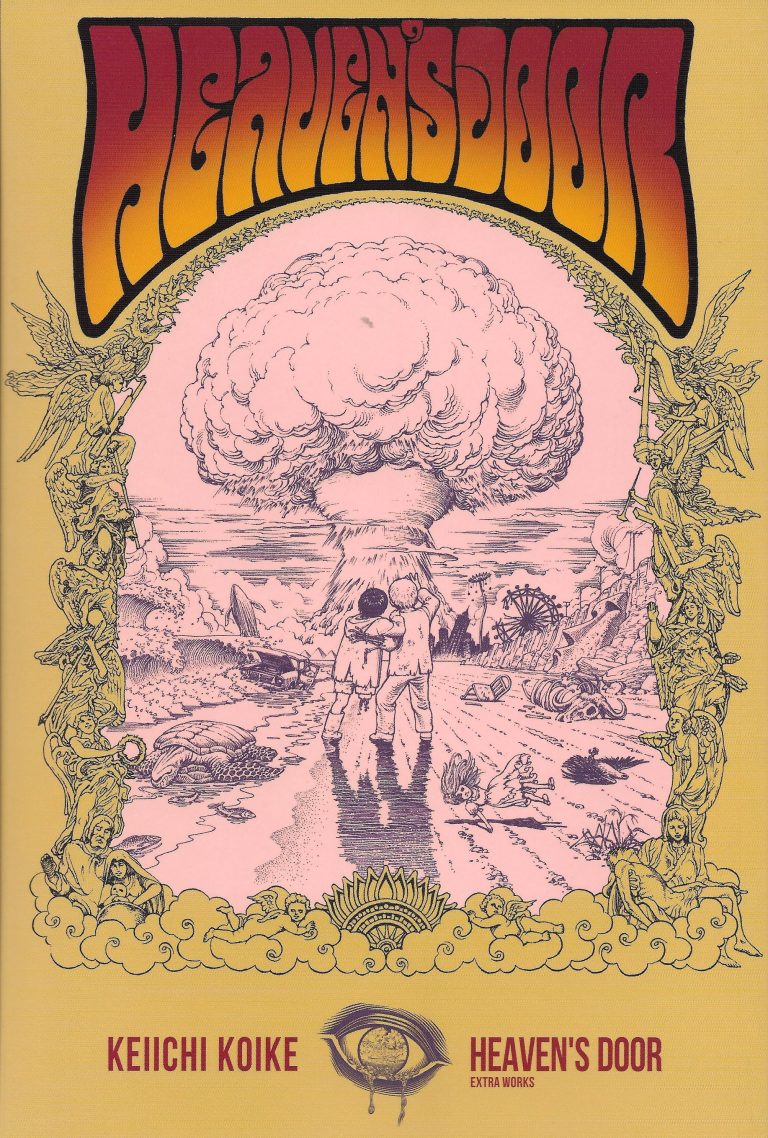 Last August, I bemoaned the lack of translated manga by Keiichi Koike, whose work kind of reads like a Frank Quietly comic and a Katsuhiro Otomo comic took too much acid, rolled around together and birthed an experimental manga lovechild.

I need moan no more, for out very very soon, maybe even now, is Heaven’s Door: Extra Works, a collection of Koike’s short stories from the ‘80s and ‘90s, thanks to those countercultural publishing gems over at San Francisco’s Last Gasp.

The Comics Journal’s Joe McCulloch has a stellar review of Heaven’s Door here and I highly recommend any readers interested in not just alt-manga, but the construction of pages and just how much an artist can play around with layout check that out.

Hopefully, if Heaven’s Door does well enough, we may finally get all three volumes of Ultra Heaven, Koike’s psychedelic epic, sooner rather than later.

I shall make every effort to return to this space before May, but if not, I will see you for the annual Free Comic Book Day Preview column, in which I will again break down every single FCBD comic on offer from All Star prior to the day itself.