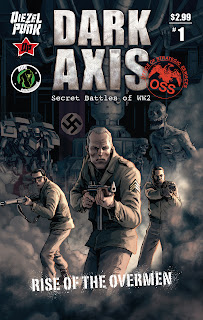 Thanks to the very generous folks behind the upcoming Dark Axis Comic by film maker Greg Mclean, we are very excited to announce our next giveaway.

The story of Dark Axis follows an alternate World War II history as you’ve never seen it before! A battle-hardened veteran, Sgt. Bryce, is given a cushy mission to scout a mountain valley. Only problem is, he’s given a squad of useless recruits for the job. After finding a treasure map on a dead SS deserter, Bryce leads his squad to a hidden German facility, full of incredible machines and advanced technology. It appears completely deserted, but when one of his squad vanishes, ripped apart by ‘something’ lurking in the shadows, Bryce realizes too late…they’re not alone.

All you need to do is simply pre-order Dark Axis with us and you go into the draw.

All Standing Orders customers can simply add the title to their list but if you don't already have an order with us, you can just as easily come in and start one for this book. Details of the time of the draw are to come.

If you'd like more of a look at the first issue, pages can be viewed at Ape Entertainment's site here. For a more in depth behind the scenes look, check out some amazing concept art and a fantastic short video clip at Fangoria.

So if WWII, zombie-nazi smashing looks like it might be for you, let us know and go into the draw to win some great prizes!
Posted by All Star Comics Team at 8:48 PM