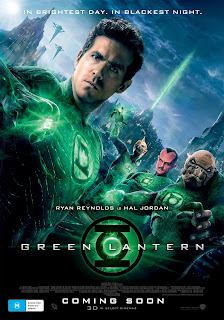 Thanks to Warner Bros Pictures and Village Roadshow we have been granted a Green Lantern ring and the constructs we're creating are prizes for you. The best part is, it couldn't be any easier to win.

So as we've done with the last couple of contests, we're giving you the chance to either write in your entry here, on Facebook or on Twitter OR you can draw your entry, email to us, display your art to the public and have them vote on it. So what is it we want you to have your creative minds work overdrive with this time?

If you were given a Green Lantern power ring, what is the first construct you would create?

Remember, we're a family store so please keep it PG.

But what is it you win? Well, we didn't lie when we said we had some amazing prize packs and they are as follows:
All entries (written and drawn) will go into the Grand Prize pack draw. The winner will be drawn from the All Star Barrel 5pm Sunday the 7th of August and must make themselves available to pick up their prize by Monday the 8th of August.
The rest of the prizes will be drawn/ votes tallied  midday Friday the 12th of August.
Until then, either get with the commenting or to the drawing board.

Big thanks once again to Warner Bros. Pictures and Village Roadshow for these amazing prizes.
Green Lantern, only in cinemas from Thursday the 11th of August 2011.
Posted by All Star Comics Team at 1:33 PM