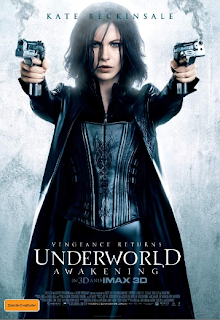 Kate Beckinsale reprises her role as Selene, a vampire warrioress, who after being captured and cryogenically frozen by humans, 12 years later escapes, only to find herself in a world where humans have discovered the existence of both Vampire and Lycan clans, and are conducting an all-out war to eradicate both immortal species.

Thanks to Underworld:Awakening we have 5 in-season double passes to give away.


To go into the draw to win one of five double passes, all you need to do is tell us which Robert De Niro or Robin Williams film would be greatly improved with the inclusion of werewolves or vampires?

Winners will be drawn at random from the All Star Barrel 7 pm Friday the 3rd of February. Tickets must be picked up from the store and will be available from Saturday the 4th. ID must also be presented upon pick up.

Thanks again to Underworld Awakening, in cinemas now.

Posted by All Star Comics Team at 3:33 PM