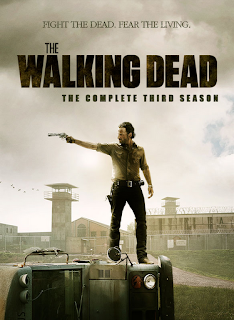 THE WALKING DEAD SEASON 3
FIGHT THE DEAD. FEAR THE LIVING.
AVAILABLE ON iTUNES, xBOX & SONY PLAYSTATION FROM 17 OCT, FAST TRACKED FROM THE US.
In the highly anticipated third season of The Walking Dead, Rick Grimes and the group of survivors continue to seek refuge from the “walkers” in a post-apocalyptic and desolate world. However, there are greater things to fear than just the walking dead and with the introduction of a new Governor (David Morrissey), the struggle to survive is rapidly increasing. Season three also introduces the graphic novel fan-favorite Michonne (Danai Gurira), along with her zombie pets. Australia will be one of the first territories in the world to view season three. Episodes will be available on iTunes, xBox and Sony Playstation the day after the Australian broadcast – 33 hours after the initial US broadcast. The season will air in two parts: 8 episodes released weekly from 17 October, with a break over Christmas (occurring worldwide) and 8 episodes recommencing in mid-February (date to be advised). Season three promises to deliver the same nail-biting tension and drama as
season two, which broke ratings records history in the US drawing in a total of 9 million viewers for the final episode.

All you need to do to go into the draw to win is tell us where you would hold up in a Walking Dead like Zombie Apocalypse.

If you are keen to view the new season of Walking Dead only 33 hours after it airs, head to
http://itunes.apple.com/au/tv-season/the-walking-dead-season-3/id564645323

Thanks again to Hopscotch Films and for more information go to: hopscotchfilms.com.au