With the recent release of Brian Wood's eco action drama, The Massive to trade, his Star Wars series coming along nicely and the impending hit, X-Men out later this month, we thought the time couldn't be better to showcase Wood's take on the era of Vikings with art by David Gianfelice in NORTHLANDERS.

Vikings. The word alone immediately evokes certain images to peoples minds. Helmets with horns attached to the sides, yes but also the darker images as well. It is that darker, brutal and more honest approach that Wood has taken with the subject that makes this series well worth while.
Northlanders is almost an anthology of tales, each collection of stories standing alone with a different artist each time. Rewarding enough as separate reads but amazing as a whole chronicling the journey of survival, race and religion during this darker part of history.

Northlanders: Sven The Returned is the first book in the series and Wood doesn't give you a moment before the first life is taken within panels of the first page. This might have you thinking this series is bound to only be about blood letting and swords play (which it is in some part) but it is hardly without reason or rhyme. The story of Sven reads a lot more like a pulpy crime novel at times, it just happens to be set in the era of Vikings. Returning home to reclaim his family birthright and fortune, after years of self imposed exile, Sven gets more than he bargained for and must face a time of reconnecting with the people and land he turned his back on years ago. 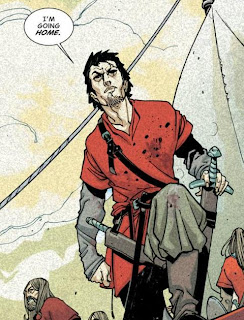 As always Wood is on fire here. His writing on Sven as a driven man of means, with a strong sense of entitlement is as great as any classic crime noir protagonist. Wood's greatest strength in most of his stories is the world building he does around his main cast, which along with the stressed gaunt line work of David Gianfelice will easily have you transported to 980 AD, almost feeling the harshness of the biting northern winds. Panels with nothing more than barren landscape filling them have you instantly understanding the hardships the cast face as much as the pages of characters holding the line to defend their homelands from invading parties.

Ultimately Northlanders is a great series showcasing more modern story tropes in a viking setting, while at the same time serving as an interesting lesson in the history of the time.

If you have any questions, you know where to ask them. You can start to buy the Legend from this Thursday the 11th of April.

All Star Legends. The legendary titles of the highest recommendation.
Posted by All Star Comics Team at 10:27 AM