ALL STAR RECOMMENDS FOR APRIL 19TH

With Countdown To Moz Metal ending this column, there will likely be a couple of weeks with no “extra” material, but in its place I have several little features planned that I’ll soon rotate around on a weekly basis according to my whims and reading habits and time constraints. One will be focused on some incredible untranslated manga and bande dessinees I own (Comics I Can’t Read), one focused on out-of-print gems to scour back issue bins for (Comics Trawl), and one focused on the late, great Epic Comics (Epic Reads). Pray for Mojo. 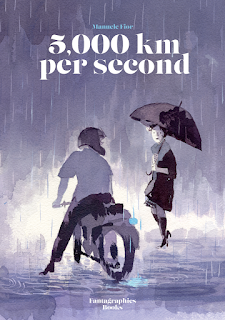 
By Manuele Fior
Published By Fantagraphics

In Italian creator Manuele Fior’s beautiful 5000 Km Per Second we are introduced to Piero and Lucia, two young Italians whose intimate connection will remain unbroken across decades and continents no matter how hard they try to snap it. This is no Hollywood romance, however, as Fior explores the couple’s “almost love” story in this tale of two very human characters whose meeting defines who they are and partly who they will become, even as the years whizz by at blinding speed (particularly for the reader) and both the physical distance and emotional separation between the pair increases.

Piero and Lucia first meet as teens, Piero instantly smitten with his striking new neighbour. From this moment, however, Fior rips through the years, first picking up with Lucia in Norway and then Piero in Egypt before taking them both all the way back home again, wisely letting his readers fill in many of the narrative blanks along the way.

Fior’s watercolours and deft seemingly ‘60s inspired cartooning are simply gorgeous. The palate shifts as does the location and season, the characters living and breathing and ageing on the page, their expressions vividly captured in his panels in all the sweetness, confusion, enraptured love and ill will that occurs when a romance simply refuses to work but is never truly dissolved.

A feverish Piero’s fifteen-hour train journey across Egypt is a beautiful and hallucinatory highlight, with Piero’s nightmarish cross-country trip expertly told by Fior as real time and fever dream collide into a single reality. Peiro, given a sickly green pallor, vividly conjures Lucia before him as he longs for the comfort of her body, the peace of her presence at the time when he could literally not be further from her.

Lucia’s isolation in Norway is explored during another stunning sequence in a book stuffed full of them. Fior shows us a lone boat adrift in a sea of white, unmoored, seemingly drifting – the perfect visual metaphor for Lucia at this stage of her life. The boat docks as her decision to return to Italy is made, turning from a symbol of loneliness into a literal vehicle for her escape.


“I always think about you,” Piero confesses during a call that spans Oslo to Cairo as the inevitability of another meeting hangs in the distance between them. But with even more time and even more space separating them, it’s a meeting with inescapable sadness and even a degree of closure – as close to a goodbye as Fior could conceive for this couple, forever entwined, as shaped by their young love as they were by all the time, travel, experience, complication and journeying that life threw at them in the subsequent years.

5000 Km Per Second is honest and oh so bittersweet. It is real, cruel in how real it feels at times in its intimacy and heartbreak. We all could be either one of these characters, so much so that I daresay that if you find no connection with them or their circumstances whatsoever then you’ve got a great deal more life to live.

Sad but oh so, so beautiful, 5000 Km Per Second seems destined for year end lists, yep, it’s already on mine. It’s a triumph of the art form as well as a beautifully designed example of it (typical of Fantagraphics’ design standards) for readers to return to again and again. Scroll down to this week’s video to see this true artist at work.

Proving once again that there is no topic that comics cannot handle with honestly, delicacy and humour are these two strips by Tille Walden and Anna Sellheim on Planned Parenthood centres. Covering everything from menstrual pain to possible cancer to being pro-choice, these two cartoonists share true life stories about their own experiences with Planned Parenthood and in the process drive home just how important these places are to all women of all ages suffering a variety of ailments or issues or, of course, pregnancy, wanted or otherwise. I cribbed this from Tom Spurgeon’s Comics Reporter (as I do with a bunch of these webcomics), so thanks to Tom for bringing it to an even wider readership beyond the confines of Tillie’s Tumblr followers including, of course, you and I. 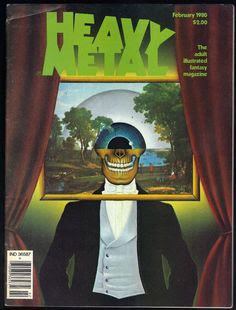 As if sensing that this is the end of the road for Countdown To Moz Metal, the February 1980 issue opens with a letter from a regular reader, which sums up my essential thesis on the life and times of HM, its ups and downs and throughout it all, its driving, overarching aesthetic and probable manifesto:

“Being stoned and reading Heavy Metal – just can’t do one without the other.”

Thank you reader named T.H.C (no, I am not making that up) for such perfect brevity.

For the record, I have never written Countdown To Moz Metal high, which might actually surprise some. It’s been written, largely, in the lunchroom of a Southbank office in small, Rhodia reporter notepads, stream of consciousness style, as I rip through an issue a week and cherry pick its contents. The constant advertisements for rolling papers and the LSD-themed contents have silently mocked this writing method and venue each and every week.

Anyway, Richard Corben, about whom so much of this segment has been dedicated, appropriately kicks things off with part one of “The Beast of Wolfton.” Concerning villagers plagued by some woods-dwelling horror, this story features an arriving Sir Hornib, who vows to find and slay this mystery beast. Corben leaves us with this right before his cliffhanger, as Lady Chabita, Hornib’s wife, hopes that the monster “tears off his cancerous dong!” Farewell, HM Corben and thanks for the memories!

Moebius provides two chapters of the still ongoing, occasionally confounding “Airtight Garage,” creating an astounding cityscape and revealing that the garage itself is something of an elegant Death Star. All this does is whet the appetite even more for Dark Horse’s upcoming Library editions of Moebius’ work, for which we will have to sell organs to procure all of, but it will be oh so worth it.

Enki Bilal provides “The Road To Ruin” about an android in love (he seems to really like this theme) who goes to a kind of robot confessional (via TV screen). However guilt-plagued or conflicted he may me, his holy pardon is denied and he’s shipped off for repair. Love! The one thing the singularity cannot plan for! This is typically bleak but equally typically gorgeous stuff from Bilal, whose Nikopol Trilogy is the first of hopefully many releases Titan has got its reprinting mitts on.

Dutch artist Dick Matena’s “9 am” is one of two duelling-themed stories in this issue and the one we’ll close up shop with. Matena, who I’d never heard of before (one of the perks of doing this has been the encounters with artists either brand new to me or forgotten by me almost every week) gives us a kind of SF samurai knight riding his armoured donkey across an arid landscape, passing oddly art deco structures along the way to dual with a fellow warrior over a (presumably) kidnapped beauty who’s naked, bound and gagged and awaiting release.

The warriors duel elegantly across the page with oversized blades, but in the midst of their conflict, one loses his sword, the blade flies through the air and lands squarely in the forehead of the captive female. With her dead, the duel is over and the warriors go their separate ways. Well, it wouldn’t be an issue of HM without a dash of misogyny, but I’d be remiss to just write this off as a sort of spoof of sexist fantasy fare (which it is) without mentioning just how pretty it is. Matena’s art is just sensational – imagine Raphael Grampa going ligne claire and you’ll get some of the way there in your own brains, but screw it, let’s have a look at a couple of pages for old time’s sake: 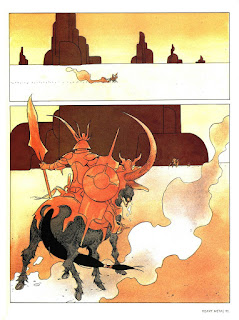 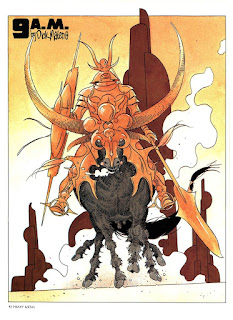 So in conclusion, we’ve gotten through roughly 3 ½ years of HM, the glory years up until the present. Overall, the quality has been frankly ridiculous. This run of comics should be coveted, near-mythologised as sequential art objects for comics lovers. Every anthology, comics or prose, is hit and miss. I’ve likely completely ignored things in every issue you might have really loved, that’s how chock full of content they have been, even at their worst. With these issues you have arguably more quality than in any other comics anthology series ever, certainly in anything SF/fantasy based. To sustain this level over a three year period, material vastly plundered from Europe or not, is an incredible editorial feat, one that Grant Morrison, with his tenure beginning in next week’s brand new issue, will simply not be able to match. There’s just no way. If he gets anywhere close, he’ll have done remarkably, but these comics are just so good, I can’t see it happening. Thank you Tardi, Dionnet, Montellier, Corben, Moebius, Druillet, Bilal, Strnad, Kirchner, Vozz, Caza, Marrs and so, so many more for filling these pages with such mind-blowing material month after month. I can only imagine what it must’ve been like to pick these issues up as they came out…

Yes, it’s in French but with drawing this stunning just let the musicality of the language flow over you as you watch the incredible Manuele Fior at work for five minutes. It’s a video more relaxing than a float tank session. He’ll be at TCAF this year, Fior will, another reason why our Canadian cousins trump us.

Cameron Ashley spends a lot of time writing comics and other things you’ll likely never read. He’s the chief editor and co-publisher of Crime Factory (www.thecrimefactory.com). You can reach him @cjamesashley on Twitter.
Posted by All Star Comics Team at 2:33 PM