ALL STAR RECOMMENDS FOR APRIL 26TH 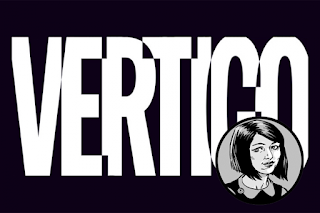 ITEM! Free Comic Book Day is next Saturday, May 7th! Whhhaaaaaaa---?? Yes, it’s Festivus for the rest of us time again. Next week I shall gamely be breaking down previews of EVERY SINGLE FREE COMIC BOOK on offer. Well, that’s the plan anyway.

ITEM! But before that, this coming weekend is Homecooked and All Star’s own Cazz will be on hand to MC giveaways on Sunday. She’s great. So is Homecooked, so get down there.

ITEM! DC fires Shelly Bond and everyone from Neil Gaiman to Becky Cloonan voices genuine thanks for her many years of service to the struggling Vertigo brand and even more voice their outrage at the decision. If I were a Marvel honcho, I’d call her up, bring her in and relaunch the Epic brand in a bid to woo some talent away from Image and to really stick it to the competition. (Disclaimer: It’s decision-making skills like this that have led me to be the outstanding success I am today in life.)

Here’s a personal fact: Shelly Bond is at least partly responsible for my comics reading taste (so blame her). I was reading Vertigo from literally day one, back when she was Shelly Roeberg. Her presence behind many a title through some real formative years, ups and downs, cannot be understated. And I’m one of a legion of readers, I’m sure. Where Vertigo seems to have gone a bit wrong of late, aside from the whole unfavourable creator contracts thing (not her fault) is that its titles once formed a perfect ladder between the mainstream and the underground comix worlds. It doesn’t feel like that at all anymore. Vertigo really was a comics gateway drug and lately things seem a bit desperate, a bit high-concept driven in an effort to claw back some market share, like someone took that whole “It’s HBO for comics!” thing a little seriously.

Anyway, if you are somehow like, “who dat?” then here’s a sampling of titles Bond, Shelly Bond, worked on over the years:

Imagine, for a moment, that this is just part of your resume…and you were just fired.
Mind-boggling. 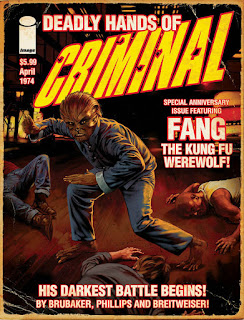 
Jesus Christ. Ten years. Way to make me feel old(er), guys. Following on from last year’s stellar Criminal: Special Edition, which celebrated the move of Brubaker and Phillips’ beloved noir title from Marvel/Icon to Image, and following up the conclusion of the creative teams biggest hit to date, The Fade Out, comes yet another stand alone Criminal tale…this time commemorating the title’s first decade of existence. As with last year’s special, Criminal: Tenth Anniversary Special is available in two editions, regular comics size and magazine size and, again like last year, it’s well worth springing for the upgrade.

Criminal fave Tracy Lawless is a young boy, hitting the road with his dad, fellow series regular Teeg, presumably as Teeg’s skipped bail. Again. Tracy’s hunch is off, however – Teeg’s on a job, searching for someone for reasons we’ll keep quiet about here. Arriving up in a small town, Teeg goes on the hunt, leaving his young son holed up in a run down hotel with nothing but eight bucks and an old copy of Kung Fu comic Deadly Hands that Teeg stole from a gas station attendant, along with the day’s takings, at gunpoint. At first, Tracy’s not too happy with this “old” magazine but he quickly gets sucked into the adventures of its star protagonist – Fang, The Kung-Fu Werewolf.

How could he not, right?

The story follows the same format as last year’s special where Teeg was in lock up, counting down to release and trying to lose himself in the pages of a comic called Savage Sword. Here, Tracy just wants to read Fang’s adventures, but is constantly pulled back to the real world by various things including his dad getting him to run errands and the sudden arrival of a local girl named Gabby. Gabby, despite at first being a prime annoyance, and Tracy quickly strike up a friendship and Gabby’s keen to help hunt down more Deadly Hands issues at a local second hand store. It all sounds rather charming, and it actually is, but Criminal being a noir book, things inevitably darken and darken and darken again and Tracy, even as street smart as he is, will be exposed to a side of his father he is in no way ready to see.

It’s quite a balance – the craziness of Fang’s adventure, hunting down a villain named Mystiko, (drawn with an extra cartoonish bounce by Phillips) against the realness and darkness of Tracy’s story (featuring possibly Phillips’ most photo-realistic art to date – ably enhanced by Breitweiser’s colours). But we all know the creative chops this team has and this effort is no exception: its construction is seamless. There’s something desperately sad about poor Tracy, so worldly (he even drives his father around at times, as regular readers would remember), so exposed to his father’s reality, trying to lose himself in the pages of possibly the most ridiculous (but awesome) ‘70s –themed superhero ever created. But it works so well. A page where Fang, unable to change back into his alter-ego of mild-mannered college student Dane Draven, has his identity exposed to love interest Mona foreshadows the “real world” reveal to Tracy of just how monstrous his father is, demonstrates just how well Brubaker’s paced his story. The friendship between Tracy and Gabby, also, is made extra sweet for its obvious and inevitable fleetingness.

If I could nit pick, and I will, I’ll say that I really wish the Deadly Hands pages were hand lettered to give that extra layer of both authenticity and distance between the craft of the Silver Age and the modern era, but really, that’s a minor quibble. Criminal has returned, as compelling, as clever and as accomplished as ever. Here’s to the next ten and let’s have one of these a year, please, it’s great fun seeing Brubaker and Phillips give their comics world its own comics world. 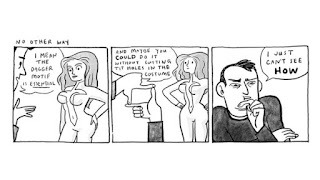 WEBCOMIC OF THE WEEK : TIT WINDOWS WITH CLOAK AND DAGGER
By Kate Beaton


Last week, the always-hilarious Kate Beaton turned her comedic attention to Marvel’s superhero duo Cloak & Dagger after learning of the characters’ upcoming move to television. The pencils for Beaton’s little strips, scathingly mocking Dagger’s outfit for its general design perviness and total impracticality for crime fighting, were posted on Twitter to howls of both laughter and fanbro outrage. Now here they are, inked up and all in the one spot just for you. If you didn’t follow the debate that ensued after Beaton took to the internet with her justifiable cries of “What the hell...?” you should look into it. “But she’s a dancer and dancers wear costumes as revealing as this!”came one of my favourite idiotic retorts.

In case you think any different, I’m actually a real fan of the characters, seriously, they are amazing cartoon metaphors for drug dependence. I bought their first ever mini-series as an impressionable lad and they are actually on a mental shortlist I call, Marvel Comics I’ll Never Get To Write (along with Night Nurse, Doctor Strange and Werewolf By Night, for the curious). Anyway, Beaton brings the funny and slams home her point perfectly here. Go take a look. Warning: contains boob. Cartoon boob. Cartoon boob repeatedly flopping out of a nonsensical superhero outfit.

Cameron Ashley spends a lot of time writing comics and other things you’ll likely never read. He’s the chief editor and co-publisher of Crime Factory (www.thecrimefactory.com). You can reach him @cjamesashley on Twitter.
Posted by All Star Comics Team at 4:27 PM