ALL STAR RECOMMENDS FOR APRIL 21ST 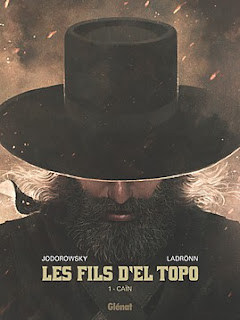 Released last week in France was the first album in the brand new Les Fils d’El Topo series. The comics sequel to Alejandro Jodrowsky’s classic 1970 film El Topo, Les Fils d’El Topo (or, The Sons of El Topo) sees writer Jodorowsky returning to the character he wrote, directed and played on screen, creating the original “Midnight Movie” in the process. Gorgeously illustrated by Jose Ladronn, who has come a very long way since his Kirby-goes-Moebius stint on Cable back in the day (which I dug immensely) this is a much-anticipated project and a welcome return by Jodo to arguably his most iconic creation. Take a look at the images below and place your bets on which publisher will bring this project to English. Given the quality of Titan’s recent French reprints, I’d be pretty happy if it was them but whoever ends up publishing the translation it can’t surely come soon enough. 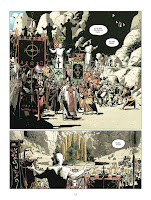 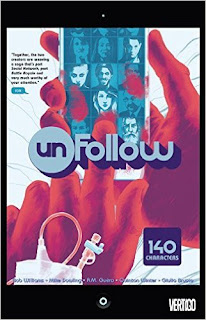 Billionaire Larry Ferrell, the creator of wildly successful social media platform, Headspace, is dying rapidly and cruelly from an aggressive cancer. Ending his days on a private island in the Bahamas with Dr Zhu, the finest oncologist money can buy, and his mentally-unhinged Mr Fixit, Rubenstein, Ferrell decides to conduct a grand social experiment with his passing by bequeathing an equal share of his billions to 140 Headspace users selected at “random” by a computer program. The winners are whisked away to his island for a few days of celebration where they also informed that not only are they now filthy rich, they stand to get even richer. If a member of the 140 dies, the deceased’s wealth will be equally distributed amongst the remaining survivors meaning that, potentially, the last living member of the 140 stands to earn 18.4 billion dollars.

And so the deaths begin.

Packing the kind of delicious high concept that Vertigo, the professed “HBO of comics,” found too delicious to resist, co-creators Rob Williams and Matt Dowling have mentioned Jack London’s The Call of the Wild and comedian Louis C.K’s bit about humans escaping the food chain as influences on their work, as well as the obvious notions of the narcissism and cruelty inherent in internet and celebrity culture. What surprises me, however, is that there seems to be no mention of H.G. Wells’ The Island of Doctor Moreau, for if anything Unfollow reads like a 21st century rewriting of that particular classic. Ferrell seems an obvious Moreau analogue, using the technology of the internet rather than surgical procedure to turn his “beasts” into something more transcendent, only to have the animalistic tendencies of his “creations” tear it all back down. “For everyone the want is bad,” says one of Moreau’s creatures, struggling against his animalistic instincts, “some want to go tearing with teeth and hands into the root of things…it is bad.” That’s a pretty perfect summation of Unfollow to me.

Complicating things is Ferrell’s actual motive. He’s well aware of what he’s potentially unleashing but, at least by the conclusion of volume one, his true motive remains unclear. Tears well up as, addressing his 140 characters, he says, “Every human seeks meaning in life. And in death. I want my legacy to be proof of who we truly are.” Whether Ferrell wants his “creations” to rise above the greed inherent in human nature or murderously succumb to it is actually unclear, even if Williams shades him as something of an evil, rich mastermind.

Of the selected 140, Ferrell is presented with something of an opposite in Akira, a famous Japanese author and activist, whose novel, The Humans, inspired Ferrell’s social experiment in the first place. Akira is convinced Ferrell’s experiment is to the detriment of mankind and leaves for the island determined to show the world “hope.” The dynamic between the two characters is intriguing - the dying, emaciated billionaire and the strikingly handsome author with his twin prosthetic legs and fondness for wearing wedding gowns seems too rich a relationship (and too obvious a bad guy-good guy dynamic) to not explore and twist as the series progresses.

The series does get off to a slightly awkward start, however. The first two issues spend unnecessary time, particularly considering the current climate of brutal monthly comics attrition, fleshing core characters out. The creators would perhaps have been better served dropping readers off at the island with the 140 assembled from the get-go and unspooling character depth from there, potential comparisons to Lost be damned. The last issue collected here (the first six are included) is a stand-alone featuring the character of Deacon, a religious loon and gun nut, and would seem to back this structural quibble up as, already hooked into the story, readers move back and forth in time with Deacon in between major ongoing plot beats and we learn there’s a lot more to him than just stereotype and caricature. Scalped’s R.M. Guerra fills in artistically for this particular chapter, bringing his traditional grit to this particular tale of wonderful psycho noir.

Obviously, the volume ends strongly but thankfully it’s from issue three that Unfollow hits its stride and clicks terrifically, ramping up both the paranoia and tension built into its premise as well as the thrills promised by its high concept. Overall, it’s smartly scripted by Williams and Dowling’s artwork, a mix of Arthur Ranson and Alex Maleev, brings perfectly fitting realism and gravitas to the story and he’s also capable of injecting in traditional beats of Vertigo weirdness; spirit animals, visions, death masks, all of which help skew reality for character and reader both.

Already optioned by network (boo) television in the States, Unfollow is off to a really solid start. It’s a title that, hopefully shakes off the stank of the Vertigo cancellation curse (although I believe it’s not looking good). Strikingly drawn and filled with distinctive and well-defined characters, Unfollow oozes with potential. I’ve not even mentioned it’s skewering of internet culture, Twitter as a survival-of-the-fittest ideological battleground, fame for fame’s sake, the number of “followers” dropping with each demise, as there’s so much more to the title than all that. If books like Unfollow do not succeed, if association with the brand is that toxic to readers, then Vertigo should probably just shut its doors. It’s been sad to see the imprint’s struggles, creatively and editorially, over the last few yearsand if there’s no reader support anymore, just end it and let books like Unfollow find an audience elsewhere – I can’t help but think that if it was an Image title, it would be all anyone would be talking about. 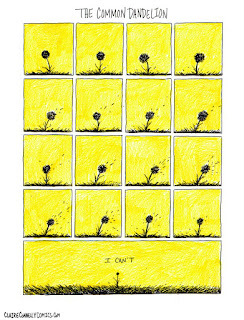 WEBCOMIC OF THE WEEK : THE COMMON DANDELION
By Claire Connelly

One more from the prolific and versatile Claire Connelly, “The Common Dandelion,” which she apparently drew on a lunch break.

It has probably the shortest reading time of any webcomic I’ve included in the history of this column, but will likely resonate with the most. Created quickly, it’s the perfect example of just how simply and cleverly comics can convey emotional weight and reflect back at us, in good times or bad, something essentially human. Lovely work.

Dan Clowes sits down in Marc Maron’s garage and chats about his life, his comics and his process. Informative and engrossing, Maron is his typically easy-going self and Clowes proves a fascinating and forthcoming interviewee. Process nerds will love it. Come for Clowes, but don’t fast forward past documentary maker Ezra Edelman, who’s on first to discuss his surprisingly complex seven-hour documentary series, OJ Simpson: Made In America, which filters the birth of modern tabloid journalism, fame, wealth, race relations and narcissism through its subject. A perfect subject for a week in which we feature Unfollow.

Posted by All Star Comics Team at 4:47 PM