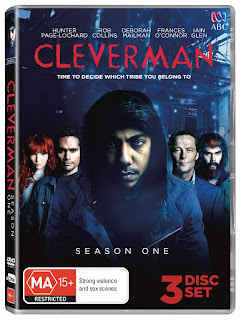 Set in the near future, a species from ancient mythology must live amongst humans and battle for survival in a world that wants to silence, exploit and destroy them.

Thanks to the Home Entertainment release of hugely critically acclaimed
CLEVERMAN: SEASON 1 available on digital, Blu-Ray and DVD now , we have 5 DVD Sets to give away!


To go into the draw for your chance to win all you need to do is comment "I'm keen for Cleverman" and you'll be entered in the draw.

Entries close 7pm Thursday 8th of September and winners will be announced Friday the 9th. Winners will be notified by Facebook as to when their prizes will be available to be collected.

A huge thanks again to Entertainment One and CLEVERMAN: SEASON 1 available on digital, Blu-Ray and DVD now!

Posted by All Star Comics Team at 1:39 PM