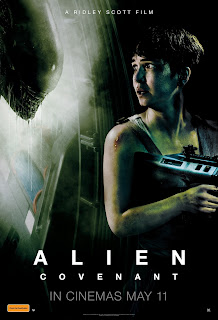 Ridley Scott returns to the universe he created, with ALIEN: COVENANT, a new chapter in his ground-breaking ALIEN franchise. The crew of the colony ship Covenant, bound for a remote planet on the far side of the galaxy, discovers what they think is an uncharted paradise, but is actually a dark, dangerous world. When they uncover a threat beyond their imagination, they must attempt a harrowing escape.

Thanks to the terrifically terrifying team behind ALIEN : COVENANT IN CINEMAS MAY 11, we're giving you the chance to be some of the first to see the film by giving away 1 double pass to a Special Preview Screening on the evening of Monday May 8th in Melbourne.
To go into the draw for your chance to win all you need to do is tell us,
"Even with ______ as my artificial space companion, I don't think we'd stand a chance against an Alien"  filling the blank with the tag of the person you can see yourself screaming in space with and you will be entered in the draw.

SPECIAL NOTE:
As this prize is for a specific time and date, please only enter if you are free that evening.

Terms and Conditions:
-Only entries made via the comments on the Facebook post will be included in the draw.
-All entries will go into the All Star Barrel and winners will be drawn at random.
-Entries close 6pm Monday the 1st of May and winners will be announced Tuesday the 2nd and notified soon after as to how to collect their tickets.

A huge thanks again to ALIEN :COVENANT IN CINEMAS MAY 11
Posted by All Star Comics Team at 12:46 PM