ALL STAR RECOMMENDS FOR APRIL 11TH 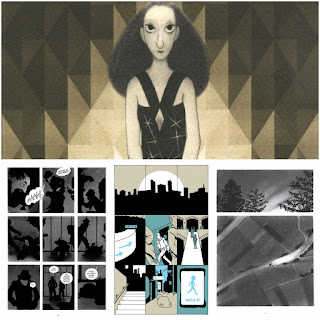 Preamble be damned, I'm back and I brought the good comics with me.

COMIC OF THE WEEK : THE INTERVIEW
By Manuele Fior
Translated by Jamie Richards
Published By Fantagraphics

It's Italy and the year is 2048. Things are peaceful after a period of great turmoil, but the traditional social foundations of generations past are beginning to wobble as a younger generation begins to redraw the boundaries of sexual morality and the conservative nuclear family. Raniero is a middle-aged psychologist with a crumbling marriage who eschews technological advancement and clings to the social structures of a world passing him by. Everything Raniero believes is soon challenged on two fronts, firstly by the appearance of bright, glowing triangles in the sky carrying extraterrestrial messages and secondly his sessions with a new patient, Dora, who claims that she is in contact with the aliens.

The Interview is Italian cartoonist Manuel Fior's second work brought into English by Fantagraphics after last year's 5,000 kms Per Second, which easily made my own Best Of list for the year. 5,000 kms Per Second was a book about an intimate connection and the fear of change. It was beautiful and heartbreaking and subtle. Similarly, The Interview uses its SF conceits as something of a mannequin for Fior to hang his resonating themes on once more, as despite glowing triangles and possible telepathic communication, The Interview is primarily concerned with connections lost (Raniero with his lovely wife Nadia) and found (Raniero with Dora) and the loss of not just one's youth through time's passage but the world in which that youth existed as reshaped by new generations.

Dora is part of something called The New Convention which favours an end to monogamy and traditional family and social structures. It's hardly a new idea and, to be honest, actually feels a little too traditional itself in its communal nature to be in any way shocking, but its aim of living polygamously to shatter "...measures of emotional repression" proves controversial to this Italy of the mid-twenty-first century, particularly as Raneiro grapples with his obvious attraction to Dora. For Dora, despite her beauty, despite her profound philosophical differences with Raniero, opens the sad psychologist up and their increasingly deep connection allows him to contemplate the reality of not just a different society, but a universe filled with far more than just us homo sapiens.

If this all sounds a bit dull, fear not, Fior's rock solid grasp on his characters, their voices and his interactions have this quiet little story humming along. And then there is the art, the utterly flawless and almost shockingly beautiful art. Working in monochrome for The Interview, Fior may even top the beauty of the gorgeous watercolours he used in 5,000 kms Per Second. The Interview is simply a lovely, lovely book. From its talking head sequences to its open and scenic landscape shots, Fior's "direction" is absolutely expert, his storytelling crystal clear, his pages not merely easy on the eyes in their artistic beauty, but also their author's facility with the mechanics of comics storytelling -- these pages seriously flow. 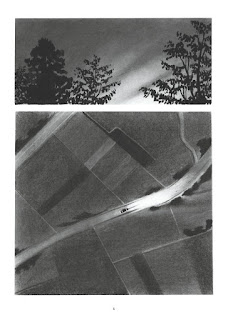 A rare moment of physicality comes in the form of a home invasion sequence early in the story, which, from the get go, makes for harrowing reading. Fior goes full film noir here, compacting the violence and shock over several pages of nine panel grids. Fior turns his figures into full silhouettes, stripping away the beautiful and soft grey tonal work readers will quickly become accustomed to, and instantly changes the book's pace, shattering the quiet beauty of much of its pages through this literal intrusion of compactly, expertly constructed violence. 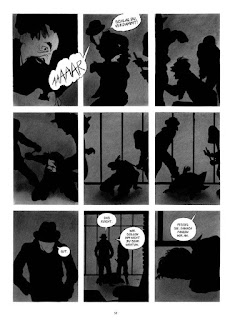 The Interview did not leave me as heartbroken as 5,000 kms Per Second but this likely a good thing. The emotional wallop is lessened here in Fior's follow up work, but it is a gorgeous and though-provoking work and a shining example of a very human kind of SF, where the idea of aliens communicating with us leads directly into an exploration of connection and communication on an extremely intimate and grounded way and how each relationship we share with another, whether tenuous or profound, is actually a shockingly rare thing in such a wide, unknown universe. 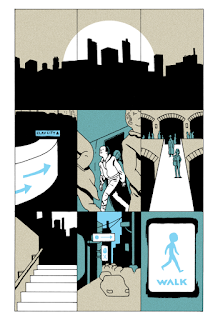 WEBCOMIC OF THE WEEK : CLAV CITY
By Tyler Landry

Where Manuele Fior explores the beauty and fragility of connection through an SF setting, Tyler Landry goes right for the throat of human ugliness. Clav City opens with the skyline of a towering metropolis, giving us glimpses of hover cars and high tech pedestrian ramps and more general, almost cliché, images of an SF utopia before very quickly intercutting panels of filth, degradation and exploitation into its very busy pages.

One suspects that Landry is not an optimistic about the future of built up urban environments. His next work, to be launched at this year's TCAF, is titled Shit and Piss and focuses on the custodial of a labyrinthine city sewer battling the creatures that dwell within. What Landry is, however, is a hell of an artist. From the opening pages crammed with intercutting scenes of city life, to the moment where everything just goes batshit insane, the psychopathology of a certain kind of technologically-obsessed city dweller is detailed with hilarious, if pitch black, intent. Two chapters of Clav City can be found over at Study Group Comics and both are well worth your time. Here's a sentence I never thought I would ever write: I can't wait for Shit and Piss.

There were few back in the heyday of Heavy Metal magazine that could out-hippy the work of Philippe Caza. Similarly, there were also few that could give the artist a run for his money when it came to social commentary. Why Caza is not as revered as his fellows, Moebius, Druillet and crew, is something of a mystery to me as he really could do it all from blazingly psychedelic silent sequences of cosmic goddesses born and dying and born again in an intergalactic ouroboros of life drawn in pointillism (!), to scathingly and seemingly heart-on-sleeve personal attacks on the plight of the underprivileged in cities that looked like Moebius and Corben jamming. He's a prodigious talent, as this video gallery of images proves. My favourite, possibly, is the picture of the android gazing up at the stars, which condenses a kind of Blade Runner existentialism into a single image. With seemingly everyone of merit finally being reprinted, Caza remains an odd omission and hopefully this gets remedied soon.

Posted by All Star Comics Team at 2:26 PM