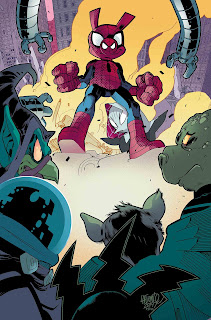 It's really cold outside! Stay warm by reading comics!

When Spider-Gwen's dimension-hopping teleportation watch is stolen, it's up to Peter Porker, the Spectacular Spider-Ham, to recover it in SPIDER-MAN ANNUAL #1, from Jason Latour, David Lafuente and, in his comic-book debut, Phil Lord, co-writer for the smash-hit Spider-Man: Into the Spider-Verse movie. What kind of cartoonish tomfoolery will Spider-Ham have to partake in to get back the watch?

If that annual left you in stitches, and you want more outrageous laughs, then you should also grab a copy of TRUE BELIEVERS MARVEL TAILS STARRING PETER PORKER #1, which reprints Spider-Ham's own comic book debut. With stories from Tom DeFalco, Mark Armstrong and Steve Mellor, see how the mighty Marvel heroes fare as anthropomorphic animals, always getting up to mischief.

One of the most powerful beings in the Galactic Empire, Darth Vader is also one of its most dangerous, but compared to the Emperor, the high ranking Grand Moffs see him as little more than an errand boy, theirs to command. But, in Greg Pak and Ramon Bachs' STAR WARS AOR DARTH VADER #1, the true fury of Darth Vader is about to be unleashed, and it'll make Tarkin's demise look like a picnic.

The grand finale of Jason Aaron and Russell Dauterman's epic event arrives with WAR OF REALMS #6 (OF 6) WR! The tides have been turning, the good guys are finally starting to taste victory, but Malekith the Accursed has one more trick up his sleeve, something... Venomous. Can Thor and the rest of the Marvel Universe be able to see this battle to the end, or is Malekith now truly unstoppable?

For nearly 40 years, he's been one of Marvel's most famous of their merry mutants. Having gone by Patch, Weapon X, Logan, he is mostly known as Wolverine. Now, some classic creators are back to tell all new stories in WOLVERINE EXIT WOUNDS #1, including Chris Claremont, Larry Hama, Sam Kieth, Salvador Larroca and Scot Eaton. It's the comic book one-shot that's the best there is at what it does, and what it does is very entertaining.

After a tumultuous run, to say the least, Brian Azzarello and Lee Bermejo's book that launched the DC Black Label imprint reaches its stunning end with BATMAN DAMNED #3 (OF 3). The strangest case Batman has ever been on, in the scariest version of Gotham we've ever seen, will have a resolution that no-one will see coming.

Magdalene Visaggio and Marley Zarcone embrace the 80s and its pop culture with MARILYN MANOR #1, as the President of the United States' darling daughter takes advantage of a power outage to throw a rave in the White House. With her best friend Abe, who claims to be possessed by the spirit of Abraham Lincoln, they'll throw the mother of all parties, which sets of a chain of events that will long dead historical figures rise and government secrets uncovered.

Following years of civil war, Optimus Prime and his fellow Autobots flee their home of Cybertron, leaving it in their foe, Megatron's metal fist. On their travels to find a new planet to settle on, Prime and his cohorts track a ghostly Cybertron signal in Erik Burnham and Dan Schoening's TRANSFORMERS GHOSTBUSTERS #1. As they follow the signal's origin to Earth, and that will lead to a fateful meeting between the Transformers and the Ghostbusters.

We hope you've all had the time to sit down and read the first arc of Jody LeHeup and Nathan Fox's hit book, Weatherman, for they're back for a second round with WEATHERMAN VOL 2 #1. Nathan Bright was accused of being the terrorist behind the worst attack on the Earth, with 18 billion lives lost. But now that Nathan himself is going down to the Earth to see the extent of the damage, he'll find something far more monstrous has taken root.

If you loved the Netflix series, Altered Carbon, then you'll also love ALTERED CARBON DOWNLOAD BLUES HC, from the author of the original source material, Richard K. Morgan, as well as Rik Hoskin and Ferran Sellares. In the future, the human body is a mere carrier of the consciousness of mankind, and for a little money, that consciousness can always move to a new home. See how this new reality takes its toll on Takeshi Kovacs, who's job as a stormtrooper for the Envoy Corps required multiple body changes, as he tries to retire.

In the world of Si Spurrier and Matias Bergara's CODA TP VOL 02, magic is in short supply, and in this dystopian fantasy world, people will do anything to get some. Bandits and rogues plan to profit from it, honourable knights die for it, but our hero, Bard, just needs the slightest drop of it to save the life of his darling wife. It's up to him and his mutant unicorn to get it.

The six-part miniseries that kicked off Brian Michael Bendis' Superman run comes to paperback with MAN OF STEEL BY BRIAN MICHAEL BENDIS TP. With each issue featuring a different, all-star artist, from Evan "Doc" Shaner to Ivan Reis, and many more, see Superman's world take a change as he tries to put out the fires of Metropolis; fights the evil Rogol Zarr, self-proclaiming destroyer of Krypton; and adjust to life without Lois and Jon around. It's a brand new era for Superman, and it starts here.

Having saved New York City from her fanatical Gang of Harleys, Harley Quinn wants nothing more than to go back to the quiet retirement that's awaiting in her own, private paradise. But nothing is ever that simple, especially not in the bleak future that is Frank Tieri and Mauricet's OLD LADY HARLEY TP, as the Laughing Boys take Old Lady Harley to their leader. But surely, their can't be the Joker? Harley was so sure she had gotten rid of him this time...

The latest in DC Ink's line of young adult graphic novels arrives with TEEN TITANS RAVEN TP DC INK, from #1 New York Times best-selling author, Kami Garcia, featuring art from Gabriel Picolo. Raven Roth has had her mother and her life taken from her in a tragic accident. Moving to New Orleans with a foster family, Raven now tries to finish her final year of school, as well as remember who she is and has an ongoing battle to quell the rising darkness within her.

Life's hard enough for most superheroes, but it's going to get harder for Kate Bishop, as she must now not only deal with keeping her new team of West Coast Avengers functioning, but now also deal with her former boyfriend: Marvel Boy, Noh-Varr. But that's only the beginning of WEST COAST AVENGERS TP VOL 02 CITY OF EVILS, from Kelly Thomspon, Daniele Di Nicuolo and Gang Hyuk Lim, as Clint Barton, the original Hawkeye, must save the chosen one, who is none other than his teammate, America Chavez!


If you love watching pilot episodes for TV shows, then be sure to get in on STEEL CAGE #1, from Mark Waid, Tom Peyer, Lanna Souvanny, Peter Gross and more. Inside are three stories, pilots for potential future series, and you, the reader, get to choose which one gets to continue. Will you choose a story about a boy who's kidnapped for an intergalactic zoo exhibit, and becomes the protetor of the animals? Maybe you'd prefer to learn about the anguish that motivates a superhero that's beloved worldwide? Or how about seeing what happens when you leave the smartest human in the world unchecked? These three stories may only be beginnings, but only one will  be able to seek an end.

The New York City art scene of punk, jazz, graffiti and hip hop of the late 70s/early 80s owes itself to Jean-Michel Basquiat, and now you can learn all about his influence in ART MASTERS SERIES GN VOL 07 BASQUIAT, from Julian Voloj and Soren Mosdal. Capturing the most seminal moments of his all too short life, from the SAMO graffiti project and his first solo show, to his relationship with Andy Warhol and the substance abuse that ultimately cost him his life.

One of the greatest mind of our time, Stephen Hawking was a genius, who persevered great trials with ALS to continue to push the boundaries of science. Now, Jim Ottaviani and Leland Myrick bring to you HAWKING HC GN, a graphic novel that takes you through Hawking's life, and how he was able to capture the heart of the world, through his theories and his public persona.

Marvel is really hamming things up this week, with the PETER PORKER SPECTACULAR SPIDER-HAM COMPLETE COLLE, featuring the talents of Tom DeFalco, Steve Mellor, Mark Armstrong and many more. Collecting the humourous one-shot and the hilarious ongoing series it spawned, see how the entire Marvel Universe fares as cartoonish animal parodies of themselves.

What started as a story from the minds of Zac Thompson and Donny Cates, Relay has now got its first arc wrapped up and collected in RELAY TP VOL 01, written by Thompson and with art from Andy Clarke and Dalibor Talajic. Throughout the galaxy, the Ga-Lactic Relay stands as a representation of unity and conformity throughout the disparate planets. But many resent its creation, and its current standing, and it's up to people like Jad Carter to keep the peace between the species. But when he finds the creator of the Relay, that peace may at last be shattered.

The Emperor of the Galactic Empire may have fallen at the hands of Luke and Anakin Skywalker, but there is still more work to be done to clean out the rest of the Empire. That's the job that the titular Alphabet Squadron, a group of Rebel pilots, are tasked to do in Alexander Freed's new novel, STAR WARS HC NOVEL ALPHABET SQUADRON. Will all the pilots survive to witness the birth of a new Republic, free of tyranny?

From the good people at Mondo, you can grab yourself the greatest He-Man figure ever made with the MOTU HE-MAN 1/6 SCALE COLLECTIBLE FIGURE. Measuring at one sixth the character's size, with thirty points of articulation and fun accessories, like the Power Sword and Battle Axe. If you were to only own one He-Man figure in your lifetime, this is the one to get.


With the new Spider-Man film, Far From Home, on the horizon, that means it's also prime time for some dolly action with SPIDER-MAN LEGENDS 6IN AF ASST 201902. Choose from the Far From Home versions of Spider-Man, in either classic or stealth suits, and Mysterio, while also being able to grab standard versions of Doppelganger, Spider-Woman, Scorpion and Hyrdro Man. But, if you grab them all, you'll have all the pieces required to built none other than Molten Man!

The first month of winter has been a chilly one, but you can already start looking forward to some warmer weather as you think about the books you could order from PREVIEWS #370 JULY 2019, which will release in the springtime. Comics, trades, figures and more await your notice inside, and if you can't get yourself a copy, be sure to look out for our Previews album that will soon be uploaded to Facebook.

Let us know if you spot anything extra, just make sure to do so before close Tuesday. So until we see you next, have a great week, live life and read comics.

Posted by All Star Comics Team at 6:06 PM