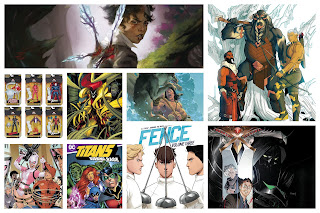 Hey! It's a new week, let's face it together with some new comics!

Heya everyone, Gwen Poole here, for now at least. After my ongoing book found its way out of publication, I've been trying to stave off the inevitability of comic book limbo, but thanks to my buddies Leah Williams and David Baldeon, it looks like I'm going to get a second chance. If you want to help keep me around, pick up GWENPOOL STRIKES BACK #1 (OF 5), where I'll try to emblazon myself into Marvel history and your memories by unmasking Spider-Man. Will I be successful? Well, you'll have to grab my book so the good people at Marvel keep making more to find out.

By combining the sci-fi nature of the Hulk with the genre of horror, Al Ewing and Joe Bennett have struck gold with their Immortal Hulk series. If you're after a better look at the creative process behind the Eisner-nominated book, then be sure to check out IMMORTAL HULK DIRECTORS CUT #1 (OF 6), with full pencils from Bennett and other fun bonus features.

When Patricia Robertson bonded with a clone of the Venom symbiote, she became the menace called Mania. Years after leaving that life behind, it's all about to come back to haunt her in Cullen Bunn and Gerardo Sandoval's ABSOLUTE CARNAGE SCREAM #1 (OF 3) AC, where she'll not only have to face down her hunter, the deadly Carnage, but her own demons as well.

But if you think that is all the symbiote madness Marvel has in store for you, think again, as Clay Chapman and Brian Level bring you ABSOLUTE CARNAGE SEPARATION ANXIETY #1 AC. Following Carnage's scrap against Deadpool, four of the five symbiotes from the Life Foundation have bound themselves to a canine host, left to wander the Midwest. But with Carnage now on their trail, with the siren song of Knull to lure them, will these symbiotes learn what separation anxiety truly is?

Another one of Robert E. Howard's creations gets the comic book limelight as Valeria, the heroine of 'Red Nails' gets a miniseries from Meredith Finch and Aneke, starting with AGE OF CONAN VALERIA #1 (OF 5). On the trail for truth, and revenge, Valeria of Aquilonia is after her brother's murderer, who has so far managed to escape justice. But can they elude Valeria's steel? Only time will tell.

Get ready for a modern triumph of artistic vision as Esad Ribic alone presents to you CONAN THE BARBARIAN EXODUS #1. A silent comic, Ribic gets the chance to fully flex his artistic muscles and tell the story of Conan's first ordeal of survival in the harshest of terrains through his art alone. Never had the young barbarian gone so far from home, and never before have you read a comic like this one.

With a scope unlike any other story told before in comic book history, Jonathan Hickman and RB Silva are back to continue the story of the history and future of the mutant race in POWERS OF X #2 (OF 6). As Charles Xavier continues to plant the seeds for mutantkind's future, can the future generations of mutants survive the upcoming hardship and reach the fabled era of mutant superiority? Also this issue is already SOLD OUT due to late orders.

For the past year of so, Frank Castle, as the Punisher, has been taking down foes that are more and more above his purview, and now, in Gerry Duggan and Juan Ferreyra's PUNISHER KILL KREW #1 (OF 5), he'll be killing monster and the gods themselves. Following the conclusion of the War of the Realms, the Punisher made a promise, a promise of vengeance, and now he's traversing the Ten Realms to deliver upon it.

The next part of Prodigal's journey home begins with SILVER SURFER PRODIGAL SUN #1, from Peter David and Francesco Manna. But with such a long distance to cover, Prodigal can't do it alone, he'll need the help of none other than Silver Surfer. Except this isn't the first time the two have met, and when they did first meet, the Surfer was still the Herald of Galactus. Get a mighty flashback to the distant past, where Prodigal battled with Silver Surfer to save a world from the hunger of Galactus.

In one of the all-time classic issues in X-history, Peter David's weird and wacky X-Factor team go under psychological X-amination with Doc Samson in the reprint of X-FACTOR #87 FACSIMILE EDITION, with art from Joe Quesada. Get to know Havok, Polaris, Quicksilver, Wolfsbane, Multiple Man, Strong Guy, and X-Factor's government liaison, Val Cooper, like never before, in ways that are hilarious, heart-breaking and character-developing.

The next chapter of Brian Michael Bendis and Alex Maleev's Batman story arrives in comic book stores for the first time with BATMAN UNIVERSE #2 (OF 6). Teaming up with Green Arrow, Batman continues to try and track down the Riddler, and the mysterious buyer of the stolen Faberge egg, eventually leading him to Gorilla City. But is the Dark Knight's mind starting to be affected by the strange energies emitting from the egg? Is everything what it seems?

Joining Batman, Superman and Wonder Woman, the Titans have their original content from the Walmart 100 Page Giants come to comic book stores with TITANS BURNING RAGE #1 (OF 7), from Dan Jurgens and Scott Eaton. Hawk and Dove are being manipulated by Mento, a former Doom Patrol member, into leading the poor in an uprising against the rich. It's up to the Titans to find out what sinister purpose lies behind the manipulation of their allies.

When a group of Nationalists bring back a monster from Arthurian times into the world, retired monster hunter, Bridgette McGuire, will escape from her retirement home to pass her legacy onto her unsuspecting grandson in ONCE & FUTURE #1 (OF 6), from acclaimed creators Kieron Gillen and Dan Mora. But her grandson, Duncan, is a museum creator, what does he know about fighting monsters? Whatever it is he needs to learn, he needs to learn it fast, for this steep learning curve is one of the deadliest.

While he's hitting big over at Marvel with Daredevil, Chip Zdarsky isn't finished with Image, presenting a new, oversized miniseries with WHITE TREES #1 (OF 2), featuring art from Runaways artist, Kris Anka. In that fantasy world of Blacksand, peace was not won until much blood was spilt, and three unbending warriors of the conflict bear scars that will last forever. Two decades later, as war begins to boil up again, the children of these three warriors have gone missing, but can the three put their differences aside to save their families?

The fourth volume of Nick Spencer's Amazing Spider-Man book arrives, and it's one of Spidey's biggest stories ever as he learns what it means to be hunted in AMAZING SPIDER-MAN TP HUNTED, featuring art from Ryan Ottley, Alberto Albuquerque and more. Throughout Spencer's run, Taskmaster and Black Ant have been gathering up animal-themed villains on behalf of Kraven the Hunter. But what was Kraven's endgame? Find out in this absolute page-turner, and even you may find you'll shed a tear for the Gibbon.

CS Pacat and Johanna the Mad are back for a third volume of intense fencing and more intense drama with FENCE TP VOL 03. In the hallowed halls of King's Row, Nicholas and Seiji are about to face off in a duel that will change not just the combatants, but King's Row itself, forever. Who will win, and where will their rivalry stand after the swords are laid down?

Artemisia has never been able to fit in anywhere in her life, spurned by the upper-class family to which she was illegitimately born to. But she might prefer it after she endures the events SPARROWHAWK TP, the complete miniseries from Delilah Dawson and Matias Basla, after a Faerie Queen pulls her away from home and into her dimension to save it. Now Artemisia is up against evil faeries who want her head, and teamed with allies that don't have her best interests at heart, but Artemisia will have to put up with it all if she ever wants to get home again.

From Asgard to Midgard, ten realms are all connected to each other through Yggdrasil, and nine out of ten of them have been conquered by the Dark Elf, Malekith the Accursed. That's just the beginning of Jason Aaron and Russell Dauterman's WAR OF REALMS TP, the miniseries that they pair have been building up to since Aaron took on the Thor title. With only Midgard left standing, Malekith will resort to any means to rule this final realm, and only Thor, the God of Thunder, can stop him in his path, with the rest of the Marvel Universe right behind him to defend what is theirs.

Batman has had many, many vehicles over the last 80 years, but very few of them were as memorable as his sleek, art-deco inspired Batcycle from the Animated Series, which is just what you can get yourself with the BATMAN ANIMATED SERIES BATCYCLE & AF SET. Coming with a Batman figure with a safety Bat helmet, no alley way in Gotham is safe from the Caped Crusader, no matter how narrow.


Humanoids new line of superhero books continues to ignite with OMNI #1, from Devin Grayson and Alitha Martinez. With people all around the globe Igniting, gaining superpowers from an unknown source, one of those people is Doctor Cecelia Cobbina. With her super-powered ability to speedily process her thoughts, she may be the only person on the Earth who can figure out how and why people are gaining mysterious power.

Since Archie's reboot and reinvention some years ago, one of the absolute highlights were the covers designed by Francesco Francavilla. If you are one of his biggest fans, then you can't miss the chance to grab a copy of ARCHIE ART OF FRANCESCO FRANCAVILLA HC, an over-sized hardcover that lets you experience Francavilla's distinctive art like never before. Featuring his greatest cover works, as well as looking at his artistic process and how his works within Archie's long history.

From Philippe Druillet comes the darkest, most explosive comic book work of his long career with DRUILLETS THE NIGHT (LA NUIT) HC. In the bleak future, the world is filled with bikers and barbarians, each one crazier and more drug-addicted than the last. With madness eclipsing the land, they're all on a road to the end of everything we know.

The most x-treme team of X-Men get themselves immortalized in plastic with X-FORCE LEGENDS 6IN AF ASST 201901, which sees new sculpts of classic characters, such Mister Sinister, Nightcrawler, Boom Boom, Cannonball, Guardian and, because you can never get enough of him, Wolverine! Plus, if you collect all six, you'll gather the pieces you need to put together the special build-a-figure: Wendigo. Now you can take your Hulk and Wolverine figures and recreate the action of Incredible Hulk #181.

It's an impressive list to say the least, let us know if there is anything extra you are after before close Tuesday night and we'll get it sorted fro you.
Until we see you next, have an awesome week, live life and read comics!

Posted by All Star Comics Team at 6:33 PM