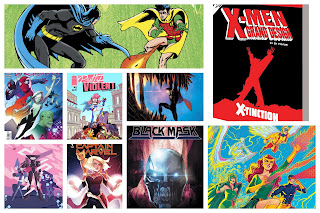 Hang on. New Comics?! How is this even possible?! We had a whole bunch of new comics last week...and now there is more?! What a dilemma!

The rematch of the decade is about to be underway in Matthew Rosenberg and Marcelo Ferreira's ABSOLUTE CARNAGE VS DEADPOOL #1 (OF 3) AC. At long last, Deadpool decides to seek therapy to get his head straight, and checks in to the Ravencroft Institute. But instead of intensive therapy, Wade might just find he needs intensive care instead when Carnage arrives, and his unsettled mind needs blood to settle itself.

With her reputation taking quite a hit in her home of Earth-65, Gwen Stacy, Ghost-Spider, is about to start a new life for herself on the main Earth-616, in GHOST-SPIDER #1, from Seanan McGuire and Takeshi Miyazawa. But not only is she taking on superhero responsibilities, Gwen will also have to balance it with her other new life as an Empire State University Student, can she make the grade and also save the day? Also, who is the mysterious villain watching her mulitversal comings and goings?

Riding hot on their relaunch from Jonathan Hickman, you can now relive three classic tales of Marvel's merry mutants in MARVEL TALES X-MEN #1. Featuring work from comic book legends like Roy Thomas, Neal Adams, Jo Duffy, Kerry Gammill, Chris Claremont and Jim Lee, you'll witness Havok, brother of Cyclops, suit up to join the X-Men; see New Mutants Sunspot and Warlock join mutant lobsters Bill and Don in a ragtag team of teen heroes; then this little number wraps things up as Storm reasserts herself amidst the upcoming execution of the X-Men on Genosha. One book, three classic comics, what more could you ask for?

Speaking of Jonathan Hickman, he's back with another installment of POWERS OF X #3 (OF 6), with RB Silva also back on art. Prepare for another traversal through mutantkind's past, present, future and far-future. Now we know almost everything Moira MacTaggert and Charles Xavier do, how will the pieces fall into place for mutants across time?
The biggest surprise of all is if we'll have copies for the shelf this time!

DC Comics joins the facsimile bandwagon with the classic BATMAN #232 FACSIMILE EDITION, from Dennis O'Neill, Neal Adams and Dick Giordano, the comics that introduced one of Batman's most dangerous foes: Ra's al Ghul. Be prepared for the dynamic comic book action that was a staple of 70s Batman, as he races to save the life of Talia al Ghul, whilst Robin's hangs in the balance.

One of Gotham's deadliest crime lords, the Black Mask, was put on ice in the Teen Titan's secret prison, but now he's free as the Year of the Villain continues in BLACK MASK YEAR OF THE VILLAIN #1, from Melbourne writer Tom Taylor and Cully Hamner. Now Roman Sionis is making headway, thanks to Lex Luthor and his Offer, in corporate crime and business is good. But when Batwoman discovers his misdeeds and sets out to stop him, will she just be up against the same old Black Mask, or something new?

Frank Miller and John Romita Jr. return for the next chapter in their reinvention of Superman's origin with SUPERMAN YEAR ONE #2 (OF 3). Grown up and having left Smallville, Clark takes his next steps towards becoming the world's greatest hero when he joins the Navy, to travel the world and defend his country. But hiding his natural super abilities will be a challenge, and a chance encounter with Lori Lemaris will take him to the dangerous depths, where lies Atlantis.

More gaps in Hellboy and the BPRD's history begin to be filled in HELLBOY AND THE BPRD SATURN RETURNS #1 (OF 3), from Mike Mignola, Scott Allie and Christopher Mitten. Hellboy and BPRD Agent Kinsley find themselves embroiled in a long-running murder mystery when a town in New Hampshire plagued by disappearances discovers a pile of long-dead corpses. Is it a supernatural, ritualistic conspiracy, or is the guilty party something more of this Earth?

Prepare for brand new, all-ages adventures with Captain Marvel as she joins the Marvel Action line of comics with MARVEL ACTION CAPTAIN MARVEL #1 (OF 3), from Sam Maggs Sweeney Boo. All Carol wanted was a quiet night with her friend Jessica Drew (AKA Spider-Woman), but those plans gets shelved after a cadre of furry felines invade Manhattan. But these aren't cats we're talking about, these are Flerkens! Can Captain Marvel and Spider-Woman send these Flerkens back into space, or is humanity doomed to become pets themselves?

In PRETTY VIOLENT #1, from Derek Hunter and Jason Young, Gamma Rae has always dreamed of being superhero, and has the super strength to back those dreams up. But there may be one complication in achieving her dream: her siblings are all infamous, hero-killing criminals! Can Gamma Rae fulfill her heroic ambitions and also survive her siblings' blood-lust for dead heroes?

Los Angeles is about to receive a new guardian angel when Kate Bishop plants her new roots in the City of Angels in HAWKEYE GN TP PRIVATE EYE, from Kelly Thompson, Leonardo Romero and Michael Walsh. With crimes to solve, and bad guys to take off the streets, Kate and her bow and arrow will have their work cut out for them. But will facing her personal demons and her past be as easy?

Drawing from an array of Viking and Siberian mythology, Grant Morrison and Dan Mora unite to bring you an updated, modern take on the origins of Santa Claus in KLAUS HOW SANTA CLAUS BEGAN GN VOL 01. Find out what Santa gets up to in the 364 days in the year he isn't on the job, as he fights against foes like Krampus, and more. If you want Santa Claus: Year One, this is the book that fits the bill.

Taking inspiration from his diverse heritage, David Vignolli presents a story that explores the discovery of the Americas through three unique viewpoints in NEW WORLD ORIGINAL GN. The first is of an indigenous warrior, who wants revenge against the invaders who took her land; the second is of an African musician who fights for freedom against those who enslaved him and the third is of a Portuguese sailor in search of redemption. While three very different individuals, they must come together to save the world from an incoming darkness. Experience a moment in history from the points of view you may not have seen through before.

In 1986, Emmanuel Lepage was sitting at home and shocked by the news of the Chernobyl nuclear meltdown, which irradiated thousands of miles of land and brought death and devastation to many. In 2008, 22 years later, Lepage made the decision to go to Chernobyl to report and draw images of the survivors and the conditions in which they lived in, as well as the highly radioactive remnants of Chernobyl itself. Now, Emmanuel Lepage collects his experiences and presents them to you in SPRINGTIME IN CHERNOBYL HC, where you can experience what Chernobyl was like after the accident, and how it forever changed the world.

Wonder Woman's definitive origin for our era gets the deluxe treatment with the WONDER WOMAN YEAR ONE DLX ED HC, from Greg Rucka and Sydney artist Nicola Scott. When Paradise Island is breached, Ares begins to awake and prepares to threaten the land, forcing the Amazons' hands and creating their own protector; none other than Wonder Woman. But to truly become the hero she needs to be for her people, she may have to sacrifice her place, her home, amongst them.

Ed Piskor makes one last hurrah as his X-Men Grand Design series comes to a conclusion with X-MEN GRAND DESIGN TP X-TINCTION, and this one covers their most influential, most successful period yet: the 1980s. Reflecting on what made the decade on of X-Men's greatest and most enduring, Piskor also looks ahead to future as the X-Men prepare themselves for the 90s as he finishes covering three decades of extensive X-history. If all that wasn't enough for you, you'll also get Piskor's restoration of Uncanny X-Men #268, originally by Chris Claremont and Jim Lee.

Broadcast under the name Star Blazers in the West, the 1974 anime, Space Battleship Yamato, was a massive success around the world, and now Michio Murakawa presents a new telling of that story with STAR BLAZERS TP VOL 01 SPACE BATTLESHIP YAMATO 2199. No longer hampered by the censorship of 70s television, Earth's potentially final voyage into the stars to find a way to fix the damage invaders had caused is retold in a far more mature, darker style, featuring richer character development.

In STRAYED #1 (OF 5), from Carlos Giffoni and Juan Doe, the far future is dominated by military-industrial corporations, which keeps humanity under its thumb and destroys distant alien worlds. But not all is yet lost, for the galaxy may yet be saved, by the most unlikeliest of duos: an astral-projecting cat named Lou, and his loving owner, Kiara. Together, can they succeed and save the lives of billions? Or will their nine lives all go to waste?

To celebrate 35 years of transformers, check out TRANSFORMERS 84 #0, an all new prequel comic to the original 1984 Transformers #1.

A brand new series written and drawn by Juan Doe, BAD RECEPTION #1 is a searing horror story that doubles as a topical satirical critique on society's obsession with technology.

Following a series of gruesome murders, two brothers find themselves in the midst of a war between the Headless Horsemen and the Knights Templar in 1987 Salem in HEADLESS #1. (Get it? HEADLESS!)

PLANET CARAVAN #1 follows Jason and his massive permanent mecha-suit - a sentient death-machine called "Love", as they try to make it home to Earth so that Jason may once more be reunited with his wife Grace.

ALI LERIGER DE LA PLANTE and NATASHA TARA PETROVI finally bring their popular web-comic to print with OPHIUCHUS TP. Join three buddies as they journey to the center of the universe as they attempt to stop a malevolent being which rots all worlds.


Haven't started the Eisner winning Saga yet? Well we've got a treat for you. SAGA COMPENDIUM TP VOL 01 collects all 54 issues of the series to catch up you for the series' eventual return.

A must have for any Spawn fan, SPAWN COVER GALLERY HC VOL 01 contains the covers for the first 100 issues of Todd McFarlane's crazy series.

Wow, another week of great bookos. Something extra that you are after from this list, just be sure to let us know before close Tuesday night.
So until we see you next, have a great week, live life and read comics!