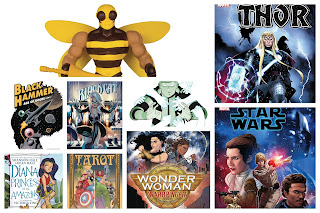 It's the end of the year. We made it. I know, we can't believe it either!
What a ride and it looks like this shipment is going to start the new year with a BANG!

Begin the new year the super way, with SUPERMAN GIANT #1, a super-sized, 100 page special Superman comic. Featuring a brand new story from Robert Venditti, Paul Pelletier and Andrew Hennessy that pits the Man of Tomorrow against the power-draining Parasite. In addition to that new story, you'll also get three reprinted stories, featuring a battle against Bizarrogirl; Superman's biggest conflict with Brainiac and a desperate escape from Dinosaur Island. This comic has it all, don't miss out.

At long last, Clint Barton is the star of a new ongoing book, beginning with HAWKEYE FREEFALL #1 from Matthew Rosenberg and Otto Schmidt. Things were already going pretty badly for Hawkeye, after he ends up on the worst side of an encounter with the Hood, but things escalate when a new criminal surfaces, going by one of Clint's old identities, Ronin. What will happen when these two unstoppable forces come face to face?

With Marvel's first ongoing Star Wars series reaching its conclusion, the gap between Episode IV and V had been filled. Now, Charles Soule and Jesus Saiz forge ahead with STAR WARS #1 to tell the story of what occurred between Episode V and VI. Luke Skywalker's world has been rocked with five words, "No... I am your father". Can Luke come to terms with the truth about Darth Vader and his father, while he works with Leia, Chewie and Lando Calrissian to free Han Solo from his carbonite prison in Jabba's Palace?

Alan Davis and Paul Renaud unite to bring you a team up with Earth's Mightiest Heroes, the Avengers, and its greatest non-team, the Defenders, which kicks off in TAROT #1. When a repressed, forgotten memory from World War II surfaces in Namor's mind, he turns to one-time WWII ally Captain America to learn whether it could have happened or not. What follows will lead the Avengers and the original Defenders into a web of mystery, intrigue and pain.

With Jason Aaron's long-lauded run on Thor at an end, Donny Cates and Nic Klein step in to take the reins with THOR #1. No longer a prince, and now a king, Thor, God of Thunder, rules over Asgard, which is finally experiencing peace after the War of the Realms. But that peace was never designed to last for long, as the Black Winter begins to approach the Ten Realms, and even Thor won't be prepared for when they hit.

When you die, that's the end for you. Unless you know a guy called Denny Little, who can provide you with a new life by transplanting your soul into a new, living body, for a modest fee. But in I CAN SELL YOU A BODY #1, from Ryan Ferrier and George Kambadais, Denny's little venture may end as badly as his TV psychic gig ended, after a hefty price is put on his head, thanks to a murdered mafioso. Now Denny has only 48 hours to save his own life, or face the final end.

New year, new you and new books! With 2020 only days away, start you year with a copy of PREVIEWS #376 JANUARY 2020, and start planning ahead what awesome new books, what fantastic new toys you want to grab. Make sure nothing you're after slips past your notice with the latest Previews. If you can't source a copy or stop by the store to check out the store copy, keep a look out on social media for our January Previews album, which will feature the cream of the crop of the latest solicitations.

The Huntress is wanted for murder, and with the GCPD and the Bat-Family looking to bring her in, she will have to team up with the question to discover who framed her in BIRDS OF PREY HUNTRESS TP, from Greg Rucka, Rick Burchett and Terry Beatty. But the deeper the Huntress and Question dig, the more the murders implicate her in the crimes, and all roads lead to an unforgettable showdown between Huntress and the Batman.

Black Bolt, the King of the Inhumans, has been imprisoned by unknown assailants, and now he must find his way back to his people in BLACK BOLT HC, which collects the entire Eisner award winning series from Saladin Ahmed and Christian Ward. But who is powerful enough to keep the king at bay; and even if he can succeed in his escape and survive the deadly journey home, will his people still welcome him?

Now with her own ongoing series, Felicia Hardy has been able to flourish as a character like never before. But if you haven't been keeping up with the single issues, now's your chance to get caught up with BLACK CAT TP VOL 01 GRAND THEFT MARVEL, from Jed MacKay, Nao Fuji, Travel Foreman and more. The Black cat enjoys the finer things in life, and won't let anything as pesky as rightful ownership get between her and what she wants. But now getting what she wants will be a little more difficult, with the entire Thieves Guild of New York after her, and that's only the beginning.


The heroes of the future of the Black Hammer universe may be taking early retirement on the Farmworld in BLACK HAMMER TP VOL 04 AGE OF DOOM PART II, from Jeff Lemire, Dean Ormston, Rich Tommaso and Dave Stewart. Gifted with everything they could want, will they be able to succumb to that nagging feeling that something is amiss, or will the future fall to evil?

Before she became Wonder Woman, Diana Prince grew up on the paradise island of Themyscira with her mother and several "aunties", all of them powerful Amazons. But even with all the Amazons, Diana grew up lonely, an only child, so she sets out to find herself a friend in DIANA PRINCESS OF THE AMAZONS TP, from Shannon & Dean Hale and Victoria Ying. Where can she find such a friend, and how far will she need to take matters into her own hands to she doesn't have to feel so alone anymore?

From Art Baltazar comes a fun, imaginative story for everyone of all ages with DREW & JOT DUELING DOODLES ORIGINAL GN HC. Starring an aspiring young artist named Andrew, he escapes his real life adventures by creating fantastic stories starring his two heroes, Drew and Jot. With his friend Foz, Andrew keeps adding to his world of Drew and Jot, but when Andrew's little sister adds an unexpected extra doodle, Drew and Jot will experience a change unlike ever before.

In the biggest crossover in comics ever, Batman and his Insurgency from the Injustice universe call into the world of He-Man and the Masters of the Universe to find recruits to take down a corrupted Superman in INJUSTICE VS THE MASTERS OF THE UNIVERSE TP, from Tim Seeley and Freddie Williams II. But in trying to secure his world's future, Batman has allowed He-Man's home of Eternia to be left at the mercy of the one and only... Darkseid.

Following Van Jensen's popular adaptation of Ian Fleming's debut James Bond novel, Casino Royale, he's back, with artist Kewber Baal, to bring you 007's next adventure, as Ian Fleming originally imagined it with JAMES BOND LIVE & LET DIE HC. Gone are the overly fantastical elements from the movies, and in its stead is left a gritty action-adventure, that moves from New York City to Jamaica, and will see Bond in for the fight of his life against the SMERSH gold-smuggling agent, Mr. Big.

In Andrea Amenta and Stefano Cardoselli's PLANET CARAVAN TP, the future is embroiled in the flames of galactic war, with corporations and big business looking to make a killing, both on the stock market and in body count. One of these foot soldiers of conquest, Jason, must fight, not just for his employer's agenda, but to keep his own sanity, with only the memories of his wife, Grace, to ground him. Eventually, he'll find his way back to Earth, only to find what the true cost of war is when he arrives.

For many, it is difficult to find your unique place in the universe among billions of others. That inner turmoil can best be seen in Rey from the new Star Wars sequel trilogy of films, and now the concept is further explored in an exciting, all ages book with STAR WARS RISE OF SKYWALKER GALAXY NEEDS YOU HC, from Caitlin Kennedy and Eda Kaban.

Join Wonder Woman in a brand new, young adult graphic novel adventure with WONDER WOMAN WARBRINGER TP from Louise Simonson, Leigh Bardugo and Kit Seaton. Just as Diana was about to prove her mettle as an Amazon to her fellow warrior sisters, her chance for glory is thrown aside when she rescues a mortal, Alia Keralis. But Alia is not as mere a mortal as she at first seems, being a Warbringer descended from Helen of Troy, destined to herald in an age of horror and bloodshed. Can Diana and Alia work together to prove this superstition wrong, or will the prophecy come to pass?

Let us know if there is anything extra we need to stash for you before close on Tuesday.
Remember take care of yourselves on NYE and we'll see you next year!

Posted by All Star Comics Team at 8:05 PM