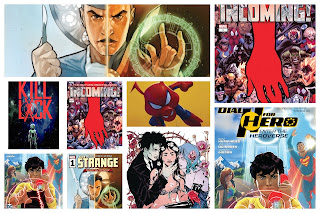 When he lost the careful, precise use of his hands, Dr. Stephen Strange found an new calling as Earth's Sorcerer Supreme. But now, in DR STRANGE #1 from Mark Waid and Kev Walker, Strange has regained the full use of his hands and restore his reputation as a skilled surgeon. However, can he now balance his life between being Earth's surgeon and sorcerer supreme?

The biggest murder mystery since the Watcher bit the moon dust in Original Sin begins in INCOMING #1, from Al Ewing, Aaron Kuder and more. As Marvel's 80th anniversary reaches its timely end, who will die and why does their murder bring every hero from the Marvel Universe together? Learn where your favourite Marvel heroes are headed in 2020 with this new event.

If you've already devoured your copies of the Spectacular Spider-Ham's classic and latest adventures, and still crave more, then you're in luck, for SPIDER-HAM #1 (OF 5), from Zeb Wells and Will Robson, hits the shelves. What kind of misadventures can our ham-tastic hero get up to, with none other than Peter Parker, the Spectacular Spider-Man, by his side? End the year with a cartoonish bang!

From creator Livio Ramondelli comes a story of crime and punishment, starring four criminal robots in KILL LOCK #1. The four robots, one a soldier, an addict, another a murder and the fourth one a child, will be linked together with a kill lock. This programmed link now forces all four robots to look out for each other, for if one of them dies, the other three will swiftly follow. But is there a way for this programming to be undone?

One of the greatest, most mysterious artifacts of the DC Universe makes its long-awaited return to comics in DIAL H FOR HERO TP VOL 01 ENTER THE HEROVERSE, from Sam Humphries and Joe Quinones. Having been saved by Superman when he was younger, Miguel Montez aspires to be just as heroic as his idol, and now he may be able to escape the boredom of his day-to-day routine and become that hero, thanks to the H Dial! But after a long game of cat and mouse against Mr. Thunderbolt, Miguel will learn there's more to being a hero than just dialing H.

Bored with her normal routine, Faith enjoys dabbling anyway she can in a little magic. Her friends humor her, but Faith knows that there's real magic out there, and that magic is about to find Faith in FAITHLESS TP, from Brian Azzarello and Maria Llovet. But the magic comes from the depths of Hell, so what kind of compromises must Faith make to be able to harness the power she needs to break free of normality?