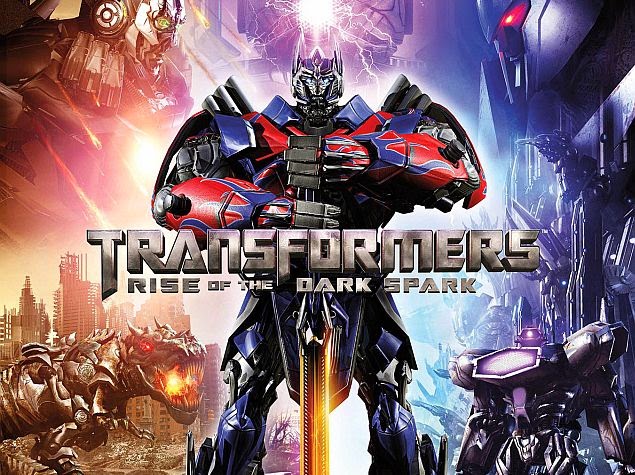 “TRANSFORMERS: RISE OF THE DARK SPARK is an arcbetween the Cybertron and Earth based worlds of this popular franchise,” remarked Mark Blecher, SVP Digital Gaming & Corporate Development at Hasbro, Inc. “This year marks30incredible years of TRANSFORMERS.  This game tells another chapter in the TRANSFORMERS story that all fans will love.”


Serving as a follow-up to both the upcoming TRANSFORMERS live-action film and Activision’s TRANSFORMERS: WAR FORCYBERTRONand TRANSFORMERS: FALL OF CYBERTRON titles, TRANSFORMERS: RISE OF THE DARK SPARK jumps worlds and factions as it weaves the tale of the hunt for an ancient relic as powerful as the Matrix of Leadership – the Dark Spark. Players will be able to switch between the heroes of the noble AUTOBOTS and the nefarious DECEPTICONS throughout the single-player campaign. Similar to High Moon Studios’ CYBERTRON entries in the highly regarded series, gameplay features nimble, fast-paced running-and-gunning combat paired with traversal and vehicle action across open battlefields for large-scale, dynamic conflicts.

Thanks to the awesome folks from Activision, we are giving you the chance to win a copy of the new TRANSFORMERS: RISE OF THE DARK SPARK game on PS3, out in stores June 25th.


To go into the draw for your chance to win just tell us, "Which Transformer would you love to see as a playable character in this game?" Feel free to create and list your own Transformer character if you like.

Terms and Conditions:
All entries will go into the All Star Barrel and winners will be drawn at random.
Entries close 6pm Monday of 30th June and winners will be announced Tuesday the 1st of June.
The Winner will be contacted and pick up will be organised after the draw .

Again thanks to Activision and the TRANSFORMERS: RISE OF THE DARK SPARK game in stores June 25th

TRANSFORMERS and all related characters are trademarks of Hasbro and are used with permission. ©2014 Hasbro. All Rights Reserved. ©2014 Paramount Pictures Corporation. All Rights Reserved. Licensed by Hasbro. Game © 2014 Activision Publishing, Inc. ACTIVISION is a registered trademark of Activision Publishing, Inc. All rights reserved. All other trademarks and trade names are the properties of their respective owners.
Posted by All Star Comics Team at 12:12 PM