ALL STAR RECOMMENDS FOR FEBRUARY 14TH 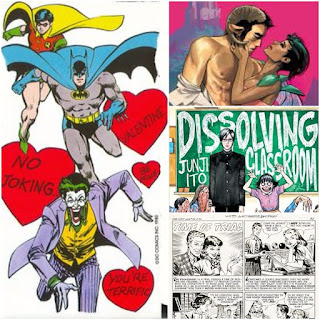 Love. It takes many forms. If I could hand out a monstrously oversized heart-shaped box filled with novelty chocolate to anyone this Valentine's Day it would likely be to Amazon Studios who last week announced the details of something called Too Old To Die Young, a new TV series by none other than Nicolas Winding Refn and Ed Brubaker. There's your perfect match right there. The series will see an ensemble of characters and follow their "existential journeys from becoming killers to samurais in the city of angels." Aside from the fact that I'm pretty sure the plural of samurai is actually samurai, this is a flawless, exciting announcement and a perfect creative pairing. Set your clocks for 2018.

In the meantime, kisses for all. Here are some comics you should read. Mwah. 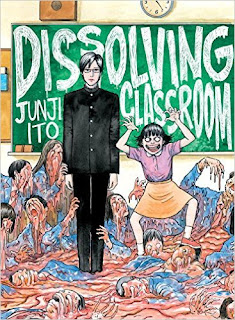 COMIC OF THE WEEK : THE DISSOLVING CLASSROOM
By Junji Ito
Published By Vertical

The famous customary politeness of Japanese people is largely built around the frequent and near-constant stream of apologies you'll both hear and speak during any given day. Witness this article on the art of the apology, Sumimasen: The Most Useful Word in The Japanese Language, which not only breaks down how to apologise and when, but every single use of apology words, from a casual "excuse me," to a grave apology, to even a substitute for a situation where we might actually use "thank you" but may have inconvenienced someone in some small way in the process - the example used in the article, a good one, is if someone holds a door open for you.

It would take a strange mind to make a satanic body horror comic out of something so seemingly innocuous, but enter Junji Ito, veteran creator of the weird and repulsive, whose latest arrival in English, The Dissolving Classroom, tasks itself with turning the apology into something sinister to the point of being literally malefic. In a little afterword comic for The Dissolving Classroom, Ito's lead character, Yuuma Azawa, tells us, "Apology press conferences are major events! Popular entertainment! Think of an entire country anticipating your public apology! Infidelity! Adultery! Eating snacks! Late to work, Last minute cancellation! Turning a blind eye! You've got no shortage of reasons to apologise to yourself, I bet!"
He's right, of course. Anyone who feels anxiety to any degree will likely be listing potential unmade apologies in their heads right now. There's something masochistic about it also - the constant beating oneself up over slights made, significant or not, to others and true to form Ito also takes this notion and, in the form of Yuuma Azawa, fetishises it. "...apology is pleasure!" Yuuma gleefully tells us in Classroom's afterword strip before prostrating himself before a large audience.

Yuuma spends the bulk of the near 200 pages preceding this afterword apologising. We first meet him arriving at a new high school and he's already apologising. He gets bullied for his apologies and keeps on apologising. He simply won't stop. Things go from awkward to unsettling pretty quickly and finally, inevitably, to the horrific, when the bodies of those around him, who've listened to his incessant apologies, begin literally melting. It turns out that, in Ito's messed up world, apologies are satanic things, a means to communicate with what is literally the Christian devil, a being drawn perfectly and classically by Ito as a fanged, horned, shaggy goatlike creature with wings and a pentagram in the centre of its forehead. That's Yuuma. His little sister, Chizumi, is even worse.

Chizumi, a little devil-pixie of a girl runs around terrorising people and is frequently the reason for Yuuma's apologies. Unlike Yuuma, Chizumi is clearly and obviously evil - her bulging eyes and cruel smile and freakish tongue marking her as monstrous from the get go. She's also the star of the show. The Dissolving Classroom is a cycle of stories, all linked together and all revealing, bit by bit, the full origin of these horrible siblings. "Chizumi in Love" is one of the stories within (appropriate for Valentine's Day) and sees the little hell-sprite fall for Tomohito, a sweet little boy of her own age, who spurns her advances by running from her in utter terror. Ito's facial expressions are brilliant here, Chizumi acting coy and cute, Tomohito a shivering wreck, terrified at the inevitability of her next appearance and romantic overture.

There's been some talk that Ito's lost his teeth - the glory days of Izumaki and Tomie long gone. Sure, his excursion into biography/comedy comics with Junji Ito's Cat Diary may not have been terrifying or overly weird, but as I noted in my cat comics column (which I'm still unjustly proud of, btw) way back in December 2015, Cat Diary succeeded amazingly in Ito turning his own horror tropes back upon himself and being all the more riotous for it. Fragments of Horror, his subsequent return to horror short stories, didn't exactly blow the roof off the top of my head, but did signal intent to get right back down to business. Dissolving Classroom is exactly that business - it is so strange, so odd, compellingly readable, shocking at times, funny at others. Ito turning civil behaviour and long-standing custom into something literally satanic is so clever. A Heavy Metal devil talking to a clean cut kid by way of his earnest apologies to others is about as inspired a skewering of Japanese culture as we're likely to get in some time. 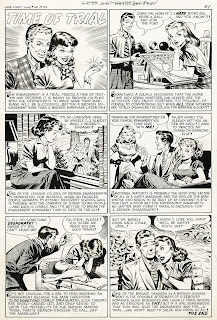 WEBCOMIC OF THE WEEK : TIME OF TRIAL
By Lee Elias and Howard Nostrand

From 1963 and via the frequently plundered Bristol Board site comes this frankly amazing single-page romance comic by Lee Elias and Howard Nostrand. "Time of Trial" from First Love Illustrated #90 is a classic little primer on both surviving and pulling the plug on a long-term relationship that has evolved into an engagement. Each of the six lushly-inked panels (there's some serious Johnny Craig vibes going on here) covers a different scenario with a different engaged couple, from learning that each partner may have different interests (duh) to ensuring you are emotionally mature to endure a marriage, to even rebounding after a failed relationship. It's a surprisingly frank and useful little comics artefact, clear in its advice to what was back then probably a sizeable audience and, honestly, not much has changed at all: "Better a broken engagement now than a broken marriage later on!"

If watching 22 minutes of original romance comic book cover art doesn't push your yes buttons, well consider us broken up right now. This is an amazing video, showing viewers inked, pasted-up covers to such titles as Young Love and Heart Throbs and then revealing the finished, printed product right after. Seriously, some of these covers are just beautiful. I could do without the American Beauty music, but whatever, just turn it down and substitute your own personal Let's Get It On.

Posted by All Star Comics Team at 3:07 PM