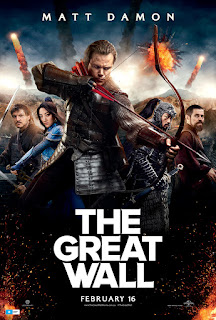 Starring global superstar Matt Damon and directed by one of the most breathtaking visual stylists of our time, Zhang Yimou (Hero, House of Flying Daggers), Legendary’s The Great Wall tells the story of an elite force making a valiant stand for humanity on the world’s most iconic structure. The first English-language production for Yimou is the largest film ever shot entirely in China. The Great Wall also stars Jing Tian, Pedro Pascal, Willem Dafoe and Andy Lau.

Thanks to the guardians from Universal Pictures and The Great Wall in cinemas February 16th, we have 5 Double In Season Passes to give away!

To go into the draw for your chance to win all you need to do is comment "I'd stand against hordes of mystic creatures if I had ______ by my side, " fill the blank with a tag of the person you'd most want to be standing shoulder to shoulder with and you'll be entered in the draw.

Terms and Conditions:
-Only entries made via the comments on the Facebook post will be included in the draw.
-Entries will be "liked" by All Star to notify the comment have been entered in the draw,
-All entries will go into the All Star Barrel and winners will be drawn at random.
-Entries close 6pm Monday the 13th of February and winners will be announced Tuesday the 14th and notified soon after as to how to collect their tickets.

A huge thanks again to Universal Pictures and The Great Wall in cinemas February 16th.

Posted by All Star Comics Team at 9:05 PM