Six years on and starting week two of our anniversary period! Don't forget if you visit the store between now and the 20th of Feb and make a purchase over $50, you instantly get a ticket for your chance to win in our 6TH ANNIVERSARY $500 GIFT VOUCHER GIVEAWAY! All details can be found by clicking HERE. 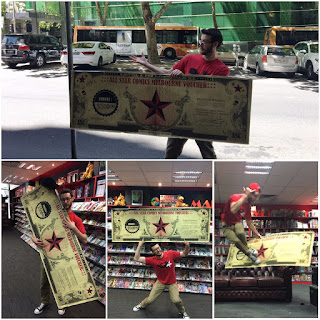 Again another week opens with another Australian creator with work released on the worldwide market, this time it's Canberra's Ryan K Lindsay and his Crime Noir by way of Jaws in CHUM TP.

REVOLUTION TP teams some of your favourite 80's cartoon legends all in the same universe mega event from IDW.

The King of Crime or just a misunderstood fellow with control issues? One of 2016's break out writers, Matthew Rosenberg head up the new series, KINGPIN #1.

Closing in fast on issue #1000, the Bat-Family that make up the cast in DETECTIVE COMICS #950 ready themselves for the fight of their lives against the League Of Shadows.

Spinning out of JUSTICE LEAGUE VS. SUICIDE SQUAD, JUSTICE LEAGUE OF AMERICA REBIRTH #1 sees Steve Orlando and Ivan Reis bringing together the heroes (and villains) least likely to make a big time super squad and drops them in a pressure cooker in hopes to save the day!

Adam Warren returns with his fan favourite, heroes in love series with EMPOWERED SOLDIER OF LOVE #1.

Get in early to check out Mark Millar's next movie property to be, featuring the epic art of Stuart Immonen in the collected EMPRESS BOOK ONE PREMIERE HC.

Relive the 90's in all their over the top glory with one of the broodiest team ups imaginable with the GHOST RIDER WOLVERINE PUNISHER TP HEARTS OF DARKNESS.

One of our personal favourites from the DC Rebirth rebranding hits the trade shelves this week with HAL JORDAN & GLC TP VOL 01 SINESTROS LAW (REBIRTH).

The greatest whale of them all...and there's been a lot, gets his own stunning graphic novel in the MOBY DICK HC.

Fans of Stephen King's Dark Tower prepare to have your minds blown when you get to pick up the creepy childrens book that appears in the pages of that epic series in CHARLIE THE CHOO-CHOO HC.

The weird and wonderful adventures of one of manga's oddest series releases the next hardcover with JOJOS BIZARRE ADV STARDUST CRUSADERS HC VOL 02.

Swords and sorcery abound in this new graphic novel release LAND CALLED TAROT HC.
If swords and sci-fi are more your thing check out Brian Wood's end tale of the literary sci fi icon in JOHN CARTER THE END #1.

Just in time for Black History Month, BLACK HISTORY IN ITS OWN WORDS HC features quotes from the likes of Zadie Smith, Jean-Michael Basquiat, and Dave Chapelle, coupled with gorgeous portraits by Ronald Wimberly.

Sure, old Bruce Wayne and Terry McGinness make fine action figures, but we all know you've got your eye on Ace the Bathound in this new BATMAN ANIMATED BATMAN BEYOND AF 3 PACK.

Jam Packed and ready to pop, anything extra you are needing from this week's list just let us know about before Wednesday morning and we'll get it sorted for you!