WHAT A WEEK!
This shipment is just clock full of amazing releases before we even get to this weekend's All Star Women’s Comic Book Club meet up!

Happening this Saturday FEBRUARY 25TH from 5pm-6:30pm, join the club and meet new friends and talk about comics including the book of the month PAPERGIRLS TP 01.
You'll also find the MAKE YOUR OWN COMIC BOOK MARK-CRAFTING TABLE and a COMIC BOOK SWAP on that afternoon, as well to get in the spirit of the 80's setting of Papergirls, there is a 80's dress theme for those interested. For all the details just have a look HERE.
Hopefully see you there.

Then on the following weekend, the 4th of March...it's about that time again 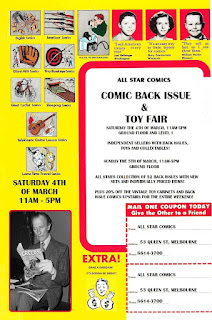 THE ALL STAR COMIC BACK ISSUE AND TOY FAIR!
Mixing things up a little, it's a massive in store event to help you complete your collection or perhaps help starting a new one!
For all the details head to the event page HERE.

Could you co-exist with Demons? In a world inhabited with characters of the underworld, follow Detective Daniel Ashton as he treads the thin blue line and will sacrifice anything to save his daughter in DARKNESS VISIBLE #1.

There can be only ONE in HIGHLANDER AMERICAN DREAM #1. Catch a glimpse into the past of Scottish swordsman Connor MacLeod as he navigates through the American Civil War and 1950's Manhattan in the lead up to "The Gathering".

Are you as EXCITED as we are for then new Zelda game! Well have a journey into the legend in this must have complete collection of illustrations and concept art in LEGEND OF ZELDA ART & ARTIFACTS HC.

A new revelation of HELLBOY's past comes to light in VISITOR HOW AND WHY HE STAYED #1 (OF 5). An unnoticed visitor was sent at Hellboy's conjuring and was task to take out the beast, but something stayed his hand. Find out what in this new series written by Mike Mignola!

Greg Rucka (Lazarus, Black Magick) starts of a new series in OLD GUARD #1 with critically acclaimed artist Leandro Fernandez (The Discipline, Punisher: MAX). A story of old soldiers who never die, but what happens when their past eventually catches up to these immortal mercenaries? Will it shed light on why they can't die? Or kill them?

More Rucka with his returns to Wonder Woman! What tragedy has befallen the Princess of the Amazons? And why has it stopped her famed Lasso of Truth from working? Find out in WONDER WOMAN TP VOL 01 THE LIES (REBIRTH).
Then are you looking forward to the upcoming Wonder Woman movie? Did you dig the costume from BvS? Why not celebrate with this beautifully sculpted statue BATMAN V SUPERMAN DOJ WONDER WOMAN STATUE.

Robo space adventure, paranormal skateboarding, breakdancing, and social swordplay! It's almost too much too handle! Find out how they've jam packed so much into this Shoen-jump style comics anthology SUN BAKERY #1.

Hang on Lobo's joined the JLA!? And Killer Frost!? Find out why Batman has assembled such an extreme team in JUSTICE LEAGUE OF AMERICA #1.

What better place to drown your past than the bright neon, noisy, sensory overload of Las Vegas! As Elektra tries to turn a new leaf in ELEKTRA #1, can she truly escape her violent past when a new player hits the town with her firmly in his sights?

Anthropomorphic magically adventures abound in the new volume of Kurt Busiek's epic fantasy hits the shelves in AUTUMNLANDS TP VOL 02 WOODLAND CREATURES. Can young dog-wizard Dusty and the Great Champion survive the mountains to find the secrets to help save the world?

The first "Bat Family" crossover of the Rebirth titles hits in BATMAN NIGHT OF THE MONSTER MEN HC. As chaos encompasses Gotham when corpses are mysteriously revived into giant monsters! It'll take all of the family to save Gotham!

It's been a wild ride since the start of Aaron and Bachalo's Stephen Strange run but this arc kicks it up a gear with the Doctor under attack from a different arch nemesis every issue in DOCTOR STRANGE PREM HC VOL 03 BLOOD IN AETHER.

The much loved and celebrated puppetry masterpiece has a renewed life in the sequel we thought we'd never get to see in JIM HENSON POWER OF DARK CRYSTAL #1 (OF 12).

Writer/artist Gabriel Hardman delves into a done in one horror tale BELFRY (ONE-SHOT) that hints that may just strip you of your humanity....spoooooky!

A fan of the TV hit Vikings or Brian Woods Northlanders? Then you are going to want to pick up HEATHEN #1, the tale of a Viking warrior Aydis who leaves her home to embark on a quest to take out a corrupt God-King!

Furthering the adventures the classic Capcom VS arcade games, this week see the start of the bout of pixel heavy weights in STREET FIGHTER VS DARKSTALKERS #0.

The new Riverdale series is a true teen soap opera delight but if you are bit more of a purest the new JUGHEAD TP VOL 02 should make you happy.

Much anticipated new volume of OUTCAST BY KIRKMAN & AZACETA TP VOL 04 reveals both answers and secrets when Kyle Barnes and Sidney have conversation that will change everything!

Penny Dreadful might be done but you get go deeper in the backstory with this prequel collected in PENNY DREADFUL TP. Revealing the events that lead to Vanessa to try and find childhood friend Mina Harker, the true nature of the vampiric that infest Victorian London is exposed.

Another writer/artist, Gregg Schigiel this week get to re-release his all age superhero tale in the graphic novel, PIX TP VOL 01 ONE WEIRDEST WEEKEND.

Which is nicely timed with the release of again another artist/writer, Vanessa Davis' autobiographical comic SPANIEL RAGE GN that is filled with self-deprecating anecdotes about her anxieties and truths about the contradictions of living in one of the world's biggest cities, New York.

Masters Of The Universe meets M.U.S.C.L.E figures. A more perfect pairing of 80's toylines is hard to imagine. The Super 7 gangs do it again with the next MOTU MUSCLE FIGURES WAVE 2 PACKA, PACK B, PACK C and PACK D.

The Loyal Subject's are at it again with this rad new line of Mighty Morphin Power Rangers with their TLS X MMPR ACTION VINYL 16PC BMB DIS WV 1 line. Can you assemble the whole team?

And there you have it. What a week. Spot something else there you aren't already down for but need us to stash? Just be sure to let us know before Wednesday morning and we'll get it sorted.