ALL STAR RECOMMENDS FOR FEBRUARY 28TH 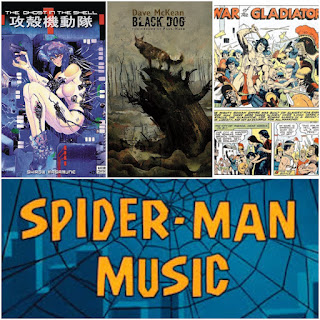 Staffers at the offices of Kodansha Comics USA must be high-fiving and actually resuming somewhat regular office hours once again after dropping no less than five notable books on the market last week. Happiness volume 3 and Inuyashiki volume 6 are absolutely worth your time and money for differing reasons (the former being a terrifically engrossing teen-vampire saga with inspired Impressionistic flourishes, the latter being virtually 200 pages of armed Japanese tactical police unloading automatic weapons into a genocidal cyborg).

However, I'm assuming the highest interest will be in the three The Ghost In The Shell re-releases, so I'll just say a few quick words about those as I haven't found the time yet to dig right in. The books, as objects, are excellent. Hardcover, oversized and (thankfully) featuring crisp matte paper, they are about as high quality a reproduction of Shirow Masamune's classics a reader could ask for.

There is some controversy concerning the first volume, in that several previously and controversially published pages have been excised from this new edition and many a completist is crying foul. Honestly though, if you're concerned enough to actually raise a stink about two pages of pretty gratuitous and unnecessary sexual activity cut/redrawn from a manga that otherwise keeps its objectification very much under skin-tight suits, well, you might actually just need to get out a little more. All Star's Mitch tells me the store blew through its initial orders, so you might want to pop in and put your name down for if you've missed out on these classic rereleases. 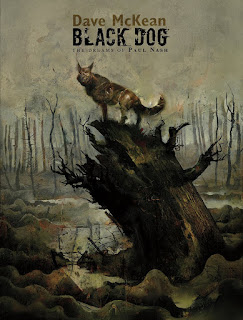 COMIC OF THE WEEK : BLACK DOG: THE DREAMS OF PAUL NASH
By Dave McKean
Published By Dark Horse

Of the many regrets I have over the hundred-odd instalments of this column I've written, the biggest and greatest may well be that I did not read Black Dog: The Dreams of Paul Nash in time to give it a slot on the Best of 2016 list.

I'm assuming that, like me, you know little about Paul Nash, the soldier who went on to become Britain's "Official Artist on The Western Front" during World War I, outside of seeing some of his potent, nightmarish paintings of the war here and there. Black Dog seeks to amend this knowledge gap by way of a non-linear comics biography told via Nash's dreams. McKean, most famous for his covers for the Neil Gaiman-scripted Sandman series as well as several comics collaborations also with Gaiman, is an admirer of Nash and immersed himself in biographical data and war history for this work created as part of NOW, a British Arts project in remembrance of the centenary of WWI.

Black Dog covers much of Nash's life, personally, artistically and on the battlefield, by way of numerous short little chapters - each one of Nash's dreams, each immersed in symbolism and each illustrated in a completely different style. I'll admit, even as a fan of McKean's solo work, that it's almost easily to take his immense talents for granted. There is the McKean "look" we are familiar with: the odd multi-media sculptures, the heavily shopped photographs, but if nothing else, Black Dog is a reminder of just what a skilled and varied artist McKean is. Each and every chapter of Black Dog is equally beautiful and equally unique, from the scratchy colour pencil utilised in "1921 - Rye Harbour with Claud Lovat Fraser, 1918 Ypres Salient" to "1917 - Military Hospital, Gosport" with its feverish vision assimilating Nash's own war paintings by way of Harvey Kurtzman Blazing Combat comics, to the surreal pen and ink distortions on display in "1906- The Planes Preparatory School, Greenwich London," in which we flash back to young Nash's school days, where the artist is beaten by a "teacher" depicted as a massive, towering, ogre of a figure. Each and every chapter of Black Dog is a distinct and stunning work of individual art and each a "private landscape" of Nash's own rich, if frequently disturbed, inner worlds.

There is deep meditative and contemplative writing on display here also, reflecting Nash's own thoughts across all these periods of his life, as McKean brings his breathtakingly painterly phantasmagoria. Art, war, existence, creation, death, it all could be so cliché and laboured but McKean is a writer - a fact often downplayed when discussing his work - and a great one at that. Here is Nash, dreaming whilst convalescing in "1917 - Swedish Hospital, London," images of monstrous, entwined blood-red thorns growing outside his window:

"Later, I would hear about the bodies torn and broken, sinking in the quagmire, abstraction, bits of tissue and mud and ash consuming each other. Somewhere in the midst of the screams, the trivial pain in my side. The guilt, the loss, I feel a sharp scratching on my retina. Or at the back, behind my eye, deeper." 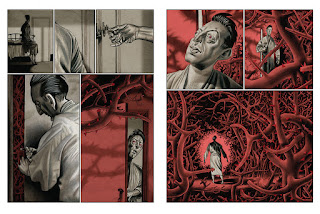 And what of the black dog himself? The titular figure and reoccurring symbol of Nash's dreamscapes? Is he the war? A darker aspect of Nash's psyche? Death itself manifested? Perhaps Black Dog all three of these things. He is at times a terrifying creature, at others a confidant, at others a companion. Perhaps the most telling moment comes near the book's end, where, during a dream featuring Nash's wife Margaret, the peace of post-war life is shattered when Nash declares that he must "take the dog for a walk." "You don't have to," comes a saddened Margaret's reply, before Nash follows his black dog, happily trotting along ahead of him, right back to the near Armageddon of the battlefield.

Struck by the beauty in life and driven to recreate it on his canvas, Paul Nash was ultimately defined by his depictions of wartime destruction. Black Dog's rear cover has a picture of Nash's grave. "Whatsoever things are lovely think on these things," it reads, right under the date of July 11th, 1946, the date Nash "fell asleep." The battle to strive for the light while stuck in the dark is expertly depicted by McKean, who imbues the subject of his greatest solo work with immense sensitivity and kindness even as his dreams become the stuff of tortured nightmare. Black Dog: The Dreams of Paul Nash is beautiful comics work, a tribute to a brilliant artist and wonderful man and a love letter to life and the art of creation. Highly recommended. WEBCOMIC OF THE WEEK : WAR OF THE GLADIATORS
By Frank Frazetta

From 1949s Real Life Comics #50 comes this early work by everyone's favourite Fantasy art icon, Frank Frazetta. The legend of Spartacus leading the slave uprising against the Romans would seem classic fodder for an artist like Frazetta, whose loincloth-wrapped, muscle-bound barbarians basically defined an entire strain of sword and sorcery aesthetic. This, however, is very early Frazetta and as such the pages are very much by an artist still on the way to his ultimate artistic endgame. This developmental peek alone should make "War of The Gladiators" worth a look for the curious reader and Frazetta freak alike, steeped as it is in the Golden Age comics aesthetic in which it was created. You'll have to click on each individual page on Pappy's Golden Age Comics Blogzine to enlarge, but that's not too much work to do, really, for a look at rare sequentials by a comics icon.

COMICS VIDEO OF THE WEEK : SPIDER-MAN MUSIC 1967-69
(ALL BACKGROUND MUSIC)

Thanks to the glory of YouTube, here's almost a complete hour of totally swingin' (groan) music from the classic '60s Spider-Man cartoon composed by one Ray Ellis. Stripped of dialogue and incidental sounds as much as possible, this is a pretty fun way to spend an hour - I swept the house and did the dishes quite happily with this music bopping away in the background.

Cameron Ashley spends a lot of time writing comics and other things you'll likely never read. He's the chief editor and co-publisher of Crime Factory (www.thecrimefactory.com). You can reach him @cjamesashley on Twitter.
Posted by All Star Comics Team at 2:01 PM