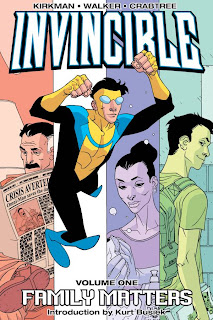 With the start of December looming and Christmas just around the corner, it seemed like the right time to announce our next ALL STAR LEGEND - Invincible Volume 1: Family Matters from Robert Kirkman and Corey Walker.

With the recent release of the Invincible Compendium and this week seeing the arrival of The Complete Invincible Library Volume 3, we thought there couldn't be a better way to celebrate than to offer up a first taste of this epic Image title.

Most would of heard of Kirkman's other book, The Walking Dead by now but may have missed his take on costumed heroes. One of the many strengths of the series is how brilliantly it creates a vast universe of heroes and villians that other companies struggle to fit in their entire lines. Couple that a good dose of teen angst surmounted with the awkwardness of newly acquired powers makes for an exciting first outing.

Walker's artwork compliments the story nicely, with a bright, colourful and dynamic approach that strongly finds a balance between the down to Earth nature of street level heroes and awe associated with super powered icons.

Same simple idea as last month, the ALL STAR LEGEND will be available for 30 days (or until stock sells out) at the discounted price. As this will be a limited stock promotion there is strictly "no holds" on the legend,  first in, best read! No further discount applies to the book as it's a pretty good chance it will already be cheaper than the US cover price! The discount also only applies to the volume listed, not the entire series of trades. 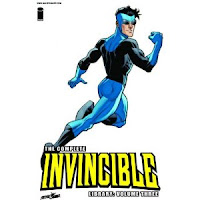 If you have any questions, you know where to ask them. You can start to buy the Legend from this Thursday the 1st of December.

All Star Legends. The legendary titles of the highest recommendation.
Posted by All Star Comics Team at 8:11 PM 1 comments 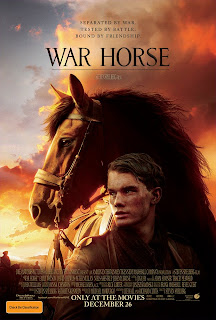 Posted by All Star Comics Team at 1:53 PM 3 comments 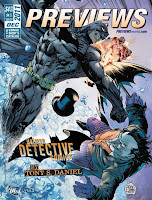 Hey check out all the new...oh wow, there isn't all that much coming out this week. Seems DC has been too good about getting their books out on time, so good that they didn't account for months with a 5th week. But hey, you know what is out this week? Previews. Who doesn't love coming in the store, taking a seat on one of our couches and flipping through Previews to find something new? You should try it if you haven't already. If you manage to find anything here that you'd like, give us a yell and we'll put it aside for you.

We're late so I'll be quick, if you want something, let us know.

Posted by All Star Comics Team at 8:12 PM 0 comments 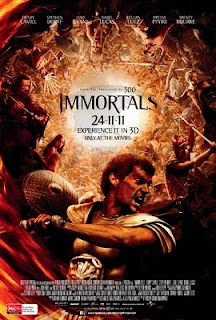 Visionary director Tarsem Singh (The Cell, The Fall) and producers Gianni Nunnari (300), Mark Canton (300) and Ryan Kavanaugh (The Fighter) unleash an epic tale of treachery, vengeance and destiny in Immortals, a stylish and spectacular 3-D adventure. As a power-mad king razes ancient Greece in search of a legendary weapon, a heroic young villager rises up against him in a thrilling quest as timeless as it is powerful.

Sound to your liking? Well thanks to the wonderful folks from Universal Pictures you now have the chance to attend a preview screening of Immortals next Wednesday night the 23rd at Village Cinema, Crown at 6:45pm.

All you need to do for the chance to win one of ten double passes is tell us what would you be the Greek God of? Pre-existing or new, we don't mind, all entries will go into the draw.

Thanks again to Universal Pictures and Immortals.

You know what I love seeing? The feedback to these lists. When I see people posting their choices to us on Facebook, it makes my cold dark innards glow a tinge, but enough about the horrors of my anatomy. These books should be hitting the shelf around 4pm on Wednesday, if you'd like something that you don't want to have to go to the effort of getting off the shelf, let us know and we'll put it in a bag all exclusive like.

Posted by All Star Comics Team at 9:56 AM 0 comments 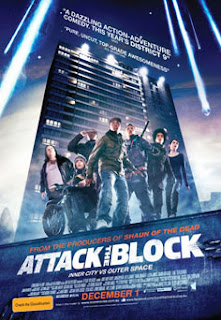 Acclaimed UK writer/actor/comedian Joe Cornish (THE ADAM AND JOE SHOW, THE ADVENTURES OF TINTIN, THE ASTONISHING ANT MAN) makes his directorial debut with ATTACK THE BLOCK - a fast, funny, frightening action adventure movie that pits a teen gang against an invasion of savage alien monsters.  Featuring a talented young cast led by Nick Frost (SHAUN OF THE DEAD, HOT FUZZ, THE BOAT THAT ROCKED), ATTACK THE BLOCK depicts a London housing estate transformed into a sci-fi playground.  A tower block into a fortress under siege.  And teenage street kids into heroes.  It’s inner city versus outer space.

Trainee nurse Sam is walking home to her flat in a scary South London tower block when she’s robbed by a gang of masked, hooded youths.  She’s saved when the gang are distracted by a bright meteorite, which falls from the sky and hits a nearby parked car.  Sam flees, just before the gang are attacked by a small alien creature that leaps from the wreckage.  The gang chase the creature and kill it, dragging its ghoulish carcass to the top of the block, which they treat as their territory.

While Sam and the police hunt for the gang, a second wave of meteors fall.  Confident of victory against such feeble invaders, the gang grab weapons, mount bikes and mopeds, and set out to defend their turf.  But this time, the creatures are bigger.  Much bigger.  Savage, shadowy and bestial, they are hunting their fallen comrade and nothing will stand in their way.  The estate is about to become a battleground.  And the bunch of no-hope kids who just attacked Sam are about to become her, and the block’s, only hope.


The press for this film has been fantastic and thanks to the wonderful folks from Icon Films, we have a bounty of passes to give away.

To go into the draw to win 1 of 20  double passes to see Attack The Block all we want you to do is tell us what fortifications would you put in place to defend your neighborhood from alien invaders?


All entries will go into the All Star Barrel and winners will be drawn at 7pm Friday the 18th of November.


For those of you who don't want to get creative, Icon Films has also supplied us with numerous 2 for 1 passes, which are up for grabs at the counter now. All you need to is ask and you shall receive.
All tickets are available for pick up only.


Again a huge thanks to Icon Films and Attack The Block, in cinemas from December 1st.

Posted by All Star Comics Team at 4:14 PM 2 comments

Comics! New Comics! If you'd like said new comics put aside for you in a pretty little paper bag, give us a yell and we'll make it happen.