What better way to see in 2013 than previewing a new week of comics. Hopefully everyone is refreshed after the break and ready for another year of exciting reads. Anything here you are chasing, you know what to do.

The world's greatest comic book heroine provides a launch pad for this vibrant examination of superheroines on and off the screen.

An Amazonian warrior princess, Wonder Woman came from a mythical land of women to fight injustice, tackling Nazis and super-villains.

In post-war America, however, DC Comics forced her into relative domesticity until she was saved by the second wave of feminism and in particular Gloria Steinem, who emblazoned her on the inaugural edition of Ms Magazine.

Don't be fooled, this isn't just another chick-flick. If you've ever picked up a comic book, tuned into Buffy or are just a hopeless fool for pop culture then this one's for you!

Sounds and looks awesome, right?! Well thanks to the excellent folks from ACMI, we have a double pass to the Thursday 3rd January 2013, 7.15pm screening of Wonder Women! The Untold Story of American Superheroines at ACMI to give away.

To go into the draw to win all you need to do it tell us: "Wonder Woman inspires millions of people worldwide, which woman (fictional or otherwise) inspires you?"

SPECIAL NOTE:
As this prize is for a certain time and place, please only enter if you are sure you can make it to the venue on that night.

Thanks again to the fine folks from ACMI and Wonder Women! The Untold Story of American Superheroines, appearing at ACMI from Thursday the 27th of December until 13th of January.
For more infomation on session times head here or check it out on Facebook here: https://www.facebook.com/events/369568723137660/https:
And for more info on ACMI head here: http://www.acmi.net.au/

T'is the season for Boxing Day Sales, so we thought it was time we took a crack at one ourselves!
From opening on Boxing Day (11am), we will be running a sale on all our recent back issue selection. Pick up titles that are only a few months old for as cheap as $2.50 each. Find 10 or more comics you like the look of and get them for only $2 each! That's right, $2! How can you go wrong? Pick up those few titles that you wanted to get at the time but couldn't justify. Now there is no excuse.

We aren't exactly sure how long we will be running this for so get in while the the going is good and the comics are cheap!!!

Of course there are no holds! :D

Hope to see you bright and early on Boxing Day! :D
Posted by All Star Comics Team at 1:30 PM 0 comments

Boxing day cricket, movies and now comics! Take a look over this list...it might be small but there are some BIG releases this week. If there is anything you are after, you know what to do. 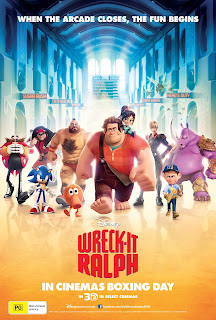 “Wreck-It Ralph” takes moviegoers on a hilarious, arcade-game-hopping journey in which Ralph (voice of John C. Reilly)—tired of being overshadowed by Fix-It Felix, Jr. (voice of Jack McBrayer), the “good guy” star of their game—sets off on a quest to prove he’s got what it takes to be a hero. Also featuring the voices of Jane Lynch and Sarah Silverman, “Wreck-It Ralph” hits cinemas Boxing Day and is in Disney Digital 3D™.

To celebrate the release of Wreck-It Ralph, Disney has been kind enough to supply us with 5 quadruple in-season passes to see the film from Boxing Day.

To go into the draw to win one of the passes all you need to do is tell us which four video game characters would make up your ultimate video game mash-up team?

Again a huge thanks to Disney and Wreck-It Ralph, only in cinemas Boxing Day 2012.

Twas the night before Christmas...okay, so we still have a week to go but at the very least it's the last comic shipment until Christmas. Right now we're sure that you're madly scrambling to get all your gifts lined up but should any of this weeks comics catch your fancy, why not get yourself a gift? Or just arrange for someone to buy one of the below. If you'd like anything put aside, let us know.

Posted by All Star Comics Team at 8:27 AM 0 comments

Second week of December and we're sure you're all getting ready for various forms of festivity. Just a quick reminder that wish lists are now in store for the filling out so if you'd like to open a surprise but still just what you wanted gift come Christmas morning, you know what to do. Lots of new books to look forward to this week so lets get right to them shall we? If you'd like anything aside, let us know. 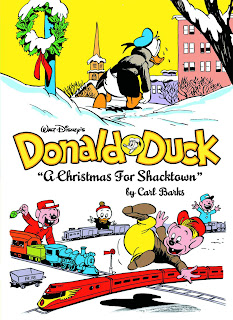 Thanks the overwhelming success we have had with this month's Legend title The Wonderful Wizard Of Oz, we thought we'd add a second title to the mix to help you fill out that someone special's X-mas stocking.

DONALD DUCK: A CHRISTMAS FOR SHACKTOWN by Carl Barks is yet another perfect pick for both young new readers or the young at heart comic veteran. Carl Barks is regarded as one of the industry's finest storytellers and what better way to check out his work than this beautiful hardcover edition Disney tale.

DONALD DUCK: A CHRISTMAS FOR SHACKTOWN will be available from today at the Legend price of $19.95 until the end of the month or the book sells out. Stock is limited on both books, so get in and grab one while you still can!

If you have any questions, you know where to ask them.

Posted by All Star Comics Team at 2:01 PM 0 comments

Just like that, we hit December. It's crazy to think that it was about two years ago to the day that we were hauling a lot of heavy material up the stairs of the store you now visit. It's hard to remember that once, it was all just a dream and empty space. In a couple of months we will have our official anniversary, but early December 2010, that was when our real work began. But enough of the reminiscing, lets get to this weeks comics and it is a big one so as always, let us know if you'd like anything aside.

Posted by All Star Comics Team at 7:39 AM 0 comments