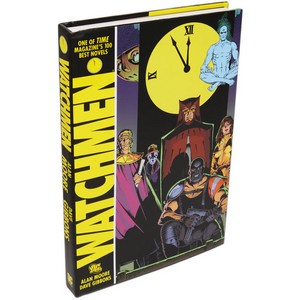 June is almost here and with that the next ALL STAR LEGEND lands. It will no doubt be one you are already familiar with but still deserves the LEGENDS status. Alan Moore and Dave Gibbons' masterpiece WATCHMEN Hardcover Edition.

ADDITIONAL UPDATE
This month's Legend has been a huge success with our stock selling out within a week. We wanted to quickly announce two things.

1. More stock of the Watchmen Hardcover Edition should be available for the Legend price of $24.95 from Wednesday the 27th of June.

2. The WATCHMEN ABSOLUTE EDITION will now be available at a reduced price too. Ever wanted to own the best possible format of this masterpiece but couldn't justify the $120 plus price tag. As of this Wednesday the 20th of June while stocks last, the WATCHMEN ABSOLUTE EDITION will be hitting the shelves for only $85!!!
Not good enough? If you have a Standing Order with us you'll get your 10% discount off that price too! An ABSOLUTE of this LEGEND for as little as $76.50?!?! Again a great chance to upgrade or buy someone the perfect birthday or early Christmas present! 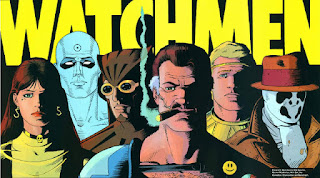 It is extremely hard for us to do justice to the complexity of this classic's themes and plots with a brief description knowing that most of us out there have already read it and not wanting to spoil anything for those who have yet to get to it. The most we should say about the story is that it  chronicles the fall from grace of a group of super-heroes plagued by all-too-human failings. Along the way, the concept of the super-hero is dissected as the heroes are stalked by an unknown assassin.

More importantly is the effect this book has had on the comic industry since its release 1986 to current day. Watchmen finds itself on bookshelves of comic book fans and non-comic readers around the globe, as one of the few titles to truly transcend the medium. 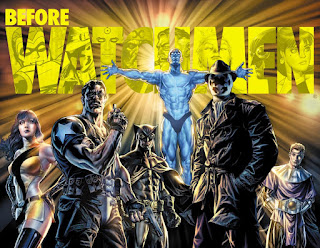 The thought behind choosing Watchmen for this month's LEGEND was the much publicised BEFORE WATCHMEN series of books being rolled out thoughout June.

For or against the Before Watchmen idea, doesn't change the grandeur of this original story for one second and it seemed as good as time as any to showcase what an amazing read this Legend is!

Knowing that most of us out there would already own a copy of the trade paperback over its many printings, we thought it would be best to run this deal on the HARDCOVER edition. This gives you the chance to finally upgrade that dog-earred, well read volume you've been carting around for years to a brand new, stunning hard cover for cheaper than the trade price. Or better yet, pick one up as a present for a friend and get the kudos for giving such a expensive gift, without spending the big bucks. ;)


If you have any questions, you know where to ask them. You can start to buy the Legend from this Thursday the 31th of May.

All Star Legends. The legendary titles of the highest recommendation.
Posted by All Star Comics Team at 9:41 AM 0 comments

New Comics for Wednesday 30th May

Rolling on through the last week of May and we're almost ready to hit the halfway point of the year. Things don't seem to be slowing down though, especially with the upcoming Oz Comic-Con just over a month away. So let's get this weeks books out of the way then shall we? If you'd like anything, let us know.

Posted by All Star Comics Team at 8:44 AM 0 comments

New Comics for Wednesday 23rd May

Heading round the final corner of May and the comics just keep on coming. As usual, there is a fair amount to look forward to this week so rather than talk, I shall show. If you'd like anything, you know the drill.

Posted by All Star Comics Team at 8:13 AM 0 comments

New Comics For Wednesday 16th May

Here we go for another week of comics and it seems like there is a lot to look forward to. So let not this diatribe get in the way of comics. Remember, anything you want, let us know.

Posted by All Star Comics Team at 8:22 AM 0 comments

New Comics For Wednesday 9th May

You probably thought this list was going to be late because we're exhausted from Free Comic Book day right? Well I'm happy to inform you that you're wrong. Despite a great and insanely busy Saturday, we'll be ready to put these new titles on the shelf on Wednesday. Thanks again to all who came out on Saturday though, it was amazing. 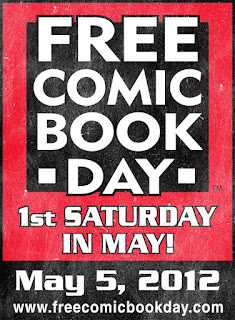 As we found out last year, the only thing people like more than free comics is a free comic sketch.
So we couldn't be prouder to announce the All Star Artist Alley line up for this year's FCBD celebrations.

17!!! Count them. 17 of the greatest artists/creators going around and they are all here to draw for you.
Please keep in mind that when you ask for your sketch that you might need some reference for the artist to draw from.
Don't forget, many of the artists will have their own product for sale on the day, so pick something of theirs up and help support local talent.
We can not thank these fine artists enough for the time and effort they are giving up on the day and hope that you will enjoy and cherish the art they produce for you as much as they will enjoy drawing it.
Posted by All Star Comics Team at 8:52 AM 1 comments