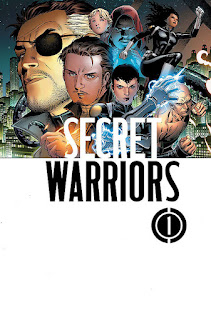 As we roll into April we have a new LEGEND to introduce you too, the super spy espionage thriller SECRET WARRIORS volume 1 from Jonathan Hickman and Stefano Caselli.

This series started off in the aftermath of Marvel's Secret Invasion event but its relationship mainstream House Of Ideas Universe stops there. All you need know is that Nick Fury is back with a group of misfit agents in training as the last line of defense against the covert uprising of one of the world's most dangerous terrorist groups, HYDRA. 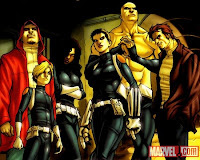 Hickman takes Nick Fury and an assorted mix of little known and completely new characters taking the reader with them as they wade in the deep end of Marvel's hardly used world of clandestine double, triple and quadruple crosses. The amount of information Hickman crams in and the depths which this saga reaches can feel somewhat disorientating but thankfully his strong characterisations of the main cast quickly draw you in leaving you begging to find out how exactly this mega mystery plot will play out.

No punches are pulled, which gives the book the hard edge the subject matter demands. This is the world of high espionage after all and from mission to mission there is no guarantee everybody will make it back.

Caselli's art is super slick, yet gritty and visceral when the story calls for it. His character design and range of emotions he has the cast deliver increases the impact of the story from page to page. No doubt we will be seeing his outstanding work headlining some major event for one of the big two.

If you have any questions, you know where to ask them. You can start to buy the Legend from this Thursday the 5th of April.

All Star Legends. The legendary titles of the highest recommendation.
Posted by All Star Comics Team at 9:34 AM