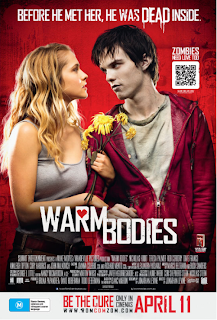 WARM BODIES is a hilarious genre-bending take on the zombie tale, told through the eyes of a zombie named ‘R’ (Nicholas Hoult). Grunting his way through a post-apocalyptic world with the mindless hunger that plagues the undead, he is full of wonder and longing for the time that must have gone before. When ‘R’ falls for Juliet, a human girl (Australia’s own Teresa Palmer), their romance sets in motion events that start to transform their entire world. Also starring John Malkovich, Dave Franco & Rob Corrdry.

Thanks to the lovely folks from Icon Films we have 5 double in-season passes to Warm Bodies, in cinemas from April 11th to give away.

To go into the draw to win, all you need to do is tell us "what would you come back from the dead for?"

Terms and Conditions:
All entries will go into the All Star Barrel and winners will be drawn at random.
Entries close 7pm Wednesday 10th of April and winners will be announced Thursday the 11th of April.
Passes will only be available to pick up from the store and winner must produce photo ID upon pick up.
Passes and posters MUST be picked up within a week of the draw date. Any remain passes after this date will be given away at our discretion to make sure they don't go to waste.
Again a huge thanks to Icon Films and Warm Bodies in cinemas from April 11th.
For more information head to: http://www.iconmovies.com.au/
or http://www.facebook.com/IconFilmDistribution.Au
Posted by All Star Comics Team at 5:13 PM