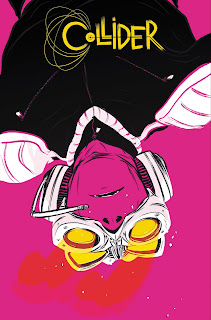 Being a fan of parallel universe stories with a good degree of humour, cast chemistry and some high stakes like the show Fringe or Matt Fraction's Casanova, Collider from Vertigo was appealing to me already from the advertised tone and concept alone.

Establishing a cool science fiction vibe from page one is what makes it special. When we meet characters Cicero, Hardy and Kelly, they're on-mission for the Federal Bureau of Physics and already at odds/sceptical and/or reliant upon each other, as core members of this incident based response unit.

The reader, much like a Marty McFly on the wall, is made to feel bamboozled by the apparent culmination of a Doc Brown-like experiment gone bubble shaped. Thrown headfirst into something immediate and seemingly insidious by way of the established parallel time loop aspects with an ominous opening page broadcast, the consequences of which are yet to occur. It’s boldest aspect is how the past, present and parallel aspects rush forth. This is done through clever use of exposition, doling out info on both the tools the crew use to deal with Physic’s events and lead character Hardy’s own perspective on these happenings. “We have to do something about your kid Hardy!” is also at the core of this, though who the “we” is, is yet to be fully known.

Art and story both merge well with the comedic/alternative tone, not dissimilar to writer Oliver’s earlier Vertigo title The Exterminators (also available). The smartest move is that the title doesn’t waste time either, establishing stakes and major character conflicts within the first two issues contrary to the usual trade structure of classic Vertigo.

Luke H
Posted by All Star Comics Team at 8:37 PM