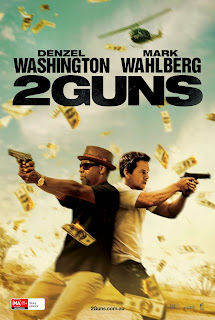 Academy Award® winner Denzel Washington and Mark Wahlberg lead an all-star cast in 2 Guns, an explosive action film that tracks two operatives from competing bureaus who are forced on the run together.  But there is a big problem with their unique alliance: Neither knows that the other is an undercover federal agent.
For the past 12 months, DEA agent Bobby Trench (Washington) and U.S. naval intelligence officer Marcus Stigman (Wahlberg) have been reluctantly attached at the hip.  Working undercover as members of a narcotics syndicate, each man distrusts his partner as much as the criminals they have both been tasked to take down.
When their attempt to infiltrate a Mexican drug cartel and recover millions goes haywire, Trench and Stigman are suddenly disavowed by their superiors.  Now that everyone wants them in jail or in the ground, the only person they can count on is the other.  Unfortunately for their pursuers, when good guys spend years pretending to be bad, they pick up a few tricks along the way.

Thanks to those lovely folks at Sony Pictures and 2 Guns, in cinemas October 10th we have 5 double in-season passes to give away.

To go into the draw for your chance to win all you need to do is tell us, "What government agency here or abroad would you like to work undercover for?"

Terms and Conditions:
All entries will go into the All Star Barrel and winners will be drawn at random.
Entries close 6pm Tuesday 8th of October and winners will be announced Wednesday the 9th. Passes will only be available to pick up from the store and winner must produce photo ID upon pick up. Passes MUST be picked up no later than a week after the draw. Any remaining passes after this date will be given away at our discretion to make sure they don't go to waste.

Thanks again to Sony Pictures and of course 2 Guns. Only At The Movies! October 10
For more infomation head to:
www.2Guns.com.au
or
https://www.facebook.com/SonyPicturesAUS?ref=br_tf