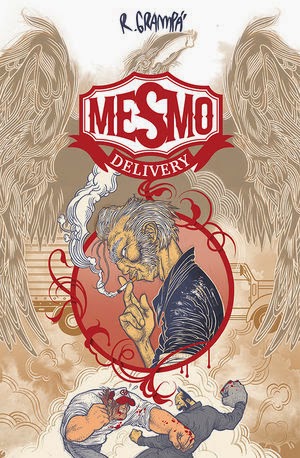 COMIC OF THE WEEK: MESMO DELIVERY BY RAFAEL GRAMPA

Sangrecco is an ageing Elvis impersonator working for transport company Mesmo Delivery. Unfortunately, he can't drive. Rufo is a washed-up boxer who can. Together they haul a mysterious semi-load across country. Stopping off in a seedy little town full of street fighters and whores, Rufo runs afoul of the locals and it’s here that some truly outrageous, surprising and gorgeously illustrated sequences follow as a sinister plot unfolds.

Mesmo Delivery was first unleashed upon the world by AdHouse books in 2008. Its Brazilian creator,Raphael Grampa, has a back ground in design and animation and unsurprisingly the world of Mesmo, from its beer bottle labels to its petrol pumps,is crafted with a designer's diligence and an animator's affection. Each character, with a cartoonish smoothness, lives and breathes on these pages,drawn in an eye-popping style that contains flourishes of Frank Quitely, Paul Pope, Atsushi Kaneko, Dave Cooper and Geoff Darrow and yet, somehow, it's all quite distinctly Grampa.

Also quite the study in motion on the page,Mesmo Delivery features several hyper-violent scenes that defy both expectation and convention. A sequence where Sangrecco literally cuts loose with twin swords over the course of four pages should make any aspiring creator stop and rethink the possibilities of his or her own action sequences from shot choice to the limitations (or lack thereof) of the page space itself.

Mesmo Delivery is all at once grotesque, elegant, surreal, cinematic and yet quite distinctly comic book. My only complaint is that Dark Horse didn't print it up in the hugely oversized hardcover edition it so rightly deserves.

WEBCOMIC OF THE WEEK: BUG BY SCARLETTE BACCINI

Well, this is a surprise.

Melbourne creator Scarlette Baccini’s Bug is close to being possibly the perfect little webcomic. Clocking in at only eight pages in length, it’s a lushly illustrated piece about a little girl and her relationship with a caterpillar. Beautifully expressive faces and a rich autumnal palate give Bug a rare warmth. Go read.

COMICS VIDEO OF THE WEEK: 3 SECONDS BY MARC-ANTOINE MATHIEU

“This book follows the trajectory of light through a tiny fragment of space-time. It lasts only three seconds, producing a very short but very dense story – a mystery.”So begins Marc-Antoine Mathieu’s 3”, a mind-meltingly hypnotic, wordless work that perfectly displays the limitless possibilities and elasticity of comics space-time. The story spans a mere three seconds of “real time” but takes exactly as long as each individual reader wants it to (not unlike any comic, sure, but stay with me). In his must read book, Comics Art, Paul Gravett perfectly describes the construction of 3” as “fiendish.”I personally can attest to this, having spent hours attempting to unpack a thing that turns three seconds into how long is a piece of string?

Anyway, for all its experimentation, 3” is also a work of pretty rigid comics formalism with each page consistently zooming in over the course of nine panels. I recommend picking up the handsome seventy-page hardcover, published in 2013 by Jonathan Cape, so you can linger over it and feel your sanity fray at the edges. However, if you only have five minutes and twenty-two seconds to spare, some glorious bande dessinee nerd of the highest order has packed the story, panel by panel, into exactly that length with a catchy little tune called ‘Hail Bop’ by Django Django layered over the top.

Embiggen as much as possible, watch and try to not let your mind rip open like old jeans worn thin at the knee.

Cameron Ashley spends a lot of time writing comics and other things you’ll likely never read. He’s the chief editor and co-publisher of Crime Factory (www.thecrimefactory.com). You can reach him @cjamesashley on Twitter.
Posted by All Star Comics Team at 5:35 PM